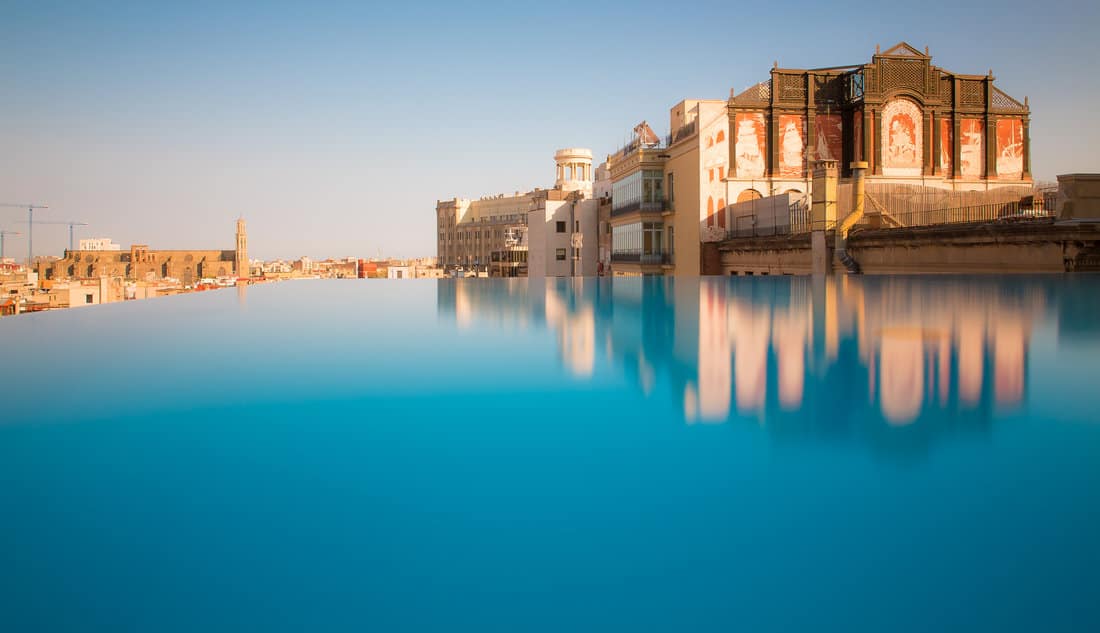 In this post we’ll break down the top terraces in the city, from the heights of Tibidabo down to the Barceloneta seafront.

The 360º terrace of the Barceló Raval hotel offers magnificent panoramic views of Barcelona. 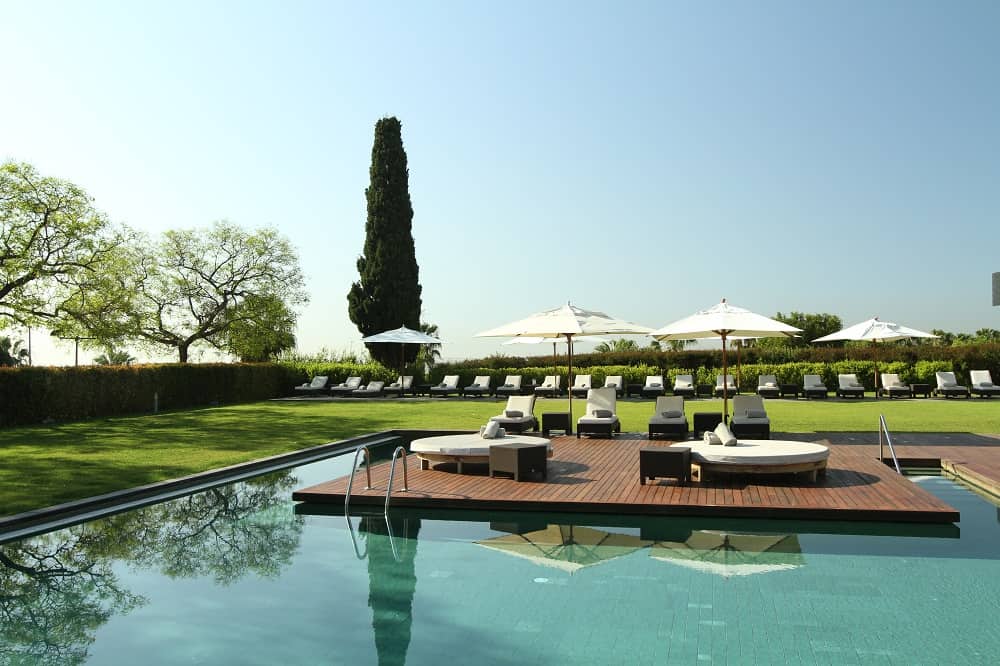 Hotel Miramar Barcelona, housed in a carefully restored palace dating from the 1920’s, overlooks the city and Mediterranean Sea from the gardens of Montjuic hill.

The Azimuth rooftop terrace at Almanac Barcelona in Eixample offers panoramic views of the city in a modern luxury setting.

Newly opened in 2018, the terrace of Iberostar Paseo de Gracia is wonderfully spacious and has jaw dropping views over Plaça de Catalunya. 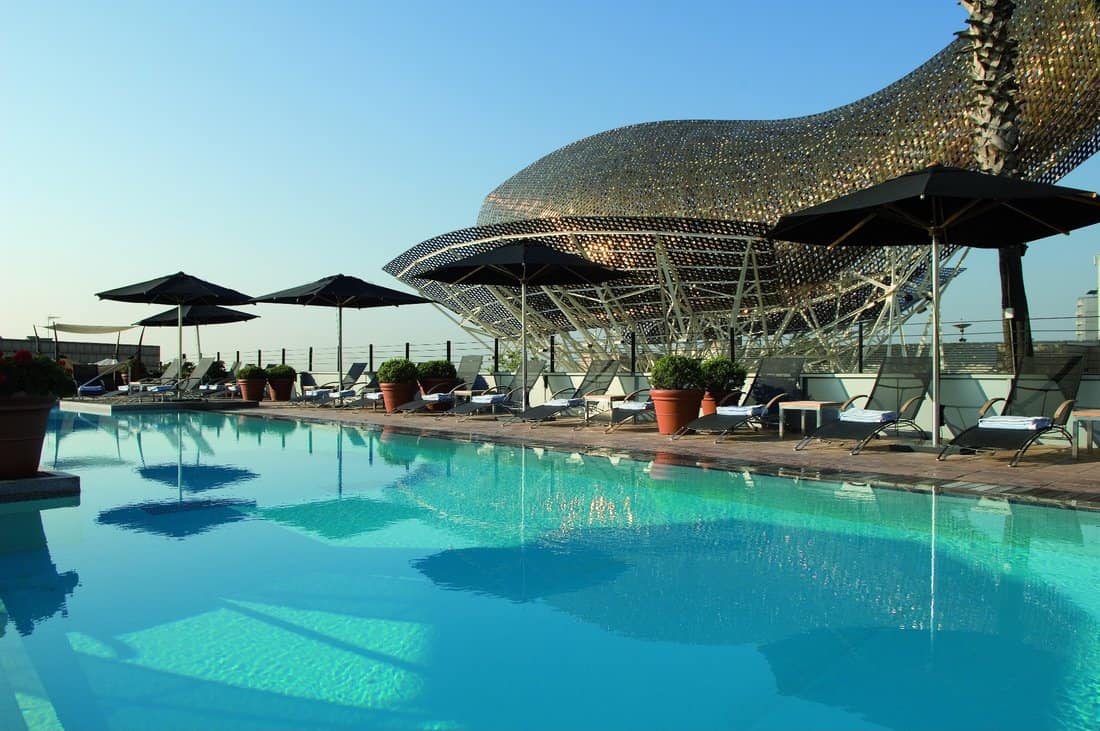 Arola, the restaurant of the Hotel Arts Barcelona features a terrace with views over the sea, DJ sessions every night and summer and live concerts every Thursday. The pool at Hotel Arts overlooks architect Frank Gehry‘s Peix d’Or (golden fish).

The Barcelona EDITION is situated right next to Santa Caterina Market in the heart of the city. The stylish hotel is part of a global chain designed by Ian Schrager, co-founder of the legendary New York nightclub Studio 54.

The 4-Star Hotel Condes de Barcelona is located on the Paseo de Gracia, in the heart of modernist Barcelona, opposite the famous Gaudi building, La Pedrera. On Monday, Tuesday, Wednesday and Sunday nights in the summer at the Alaire terrace features DJ sessions, caricatures, bolero, bossa nova and jazz. 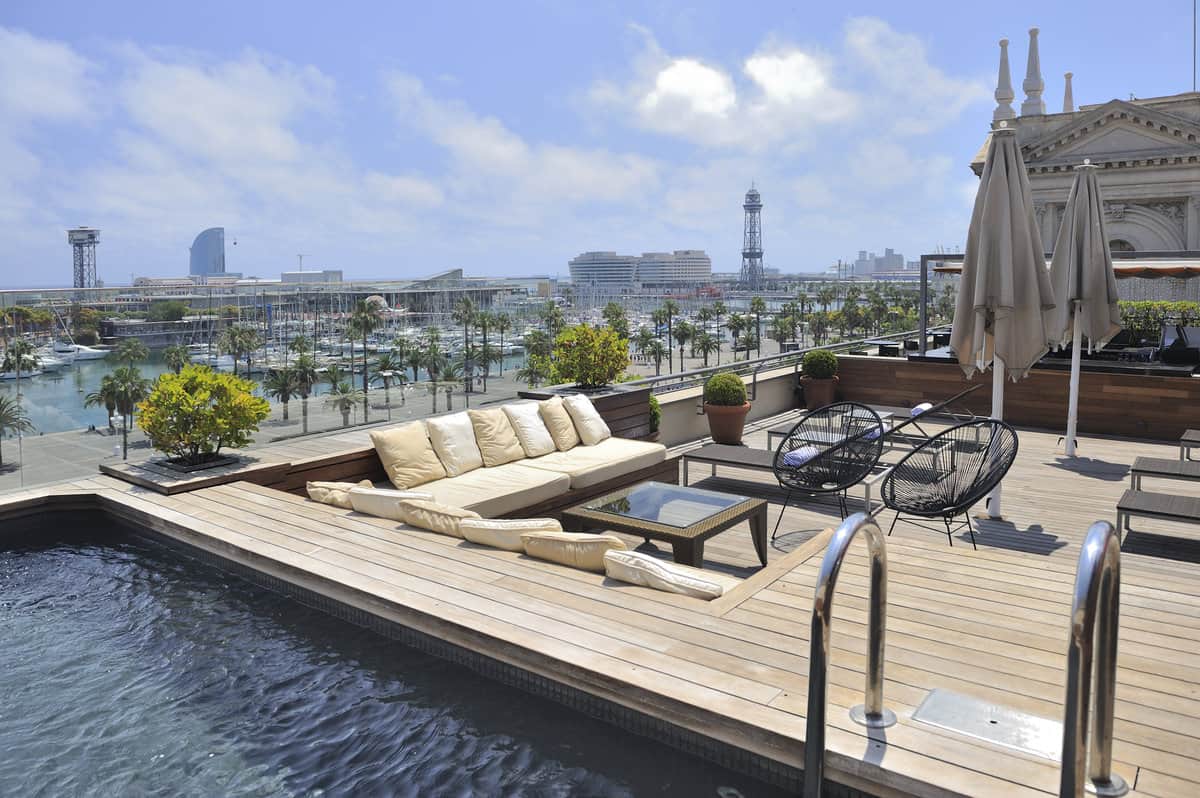 19th-century Duquesa de Cardona Hotel is located in front of the port, a few minutes walk to Ramblas and the Gothic Quarter. The terrace offers fantastic views of the Port of Barcelona, the Mapfre Towers, Barceloneta, Port Vell, Maremagnum and World Trade Center. 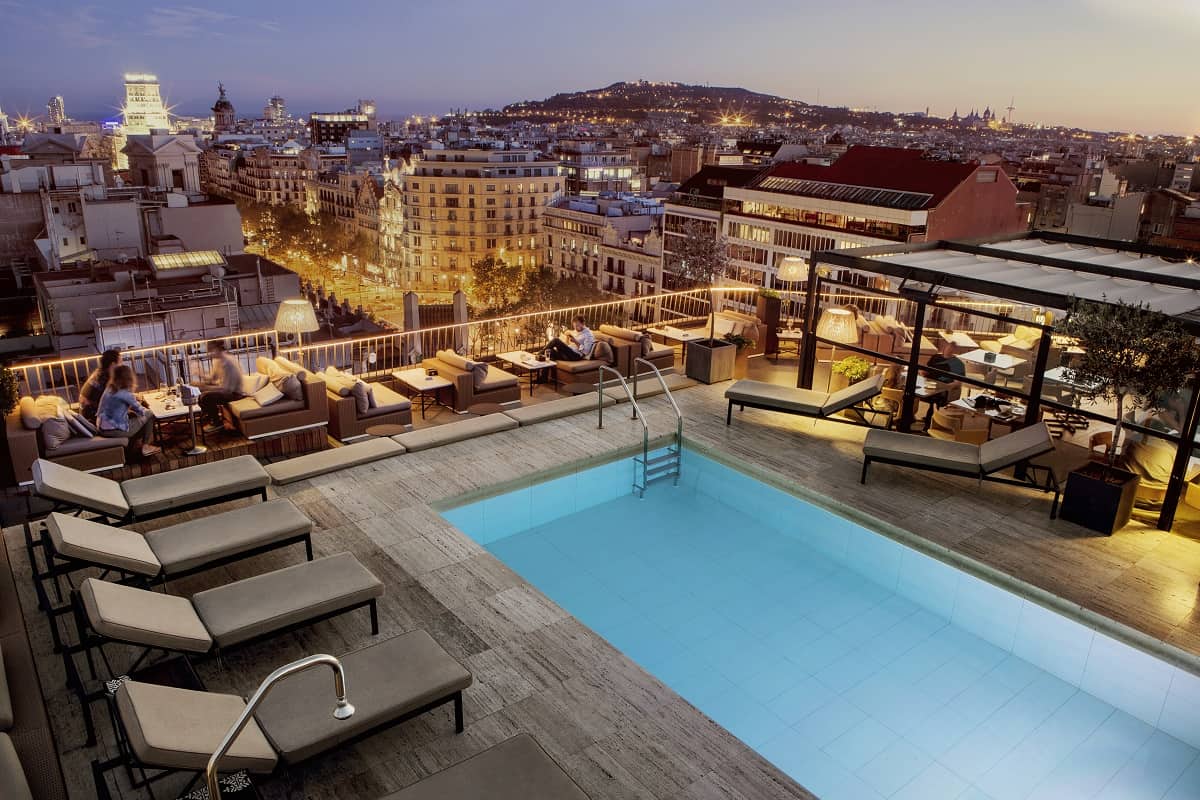 The classic 5-star Gran Hotel La Florida dates back to 1925 and has a glamorous history of guests including Ernest Hemingway and Jimmy Stewart. With a unique location atop Tibidabo mountain the hotel grants one of the very best views of Barcelona. 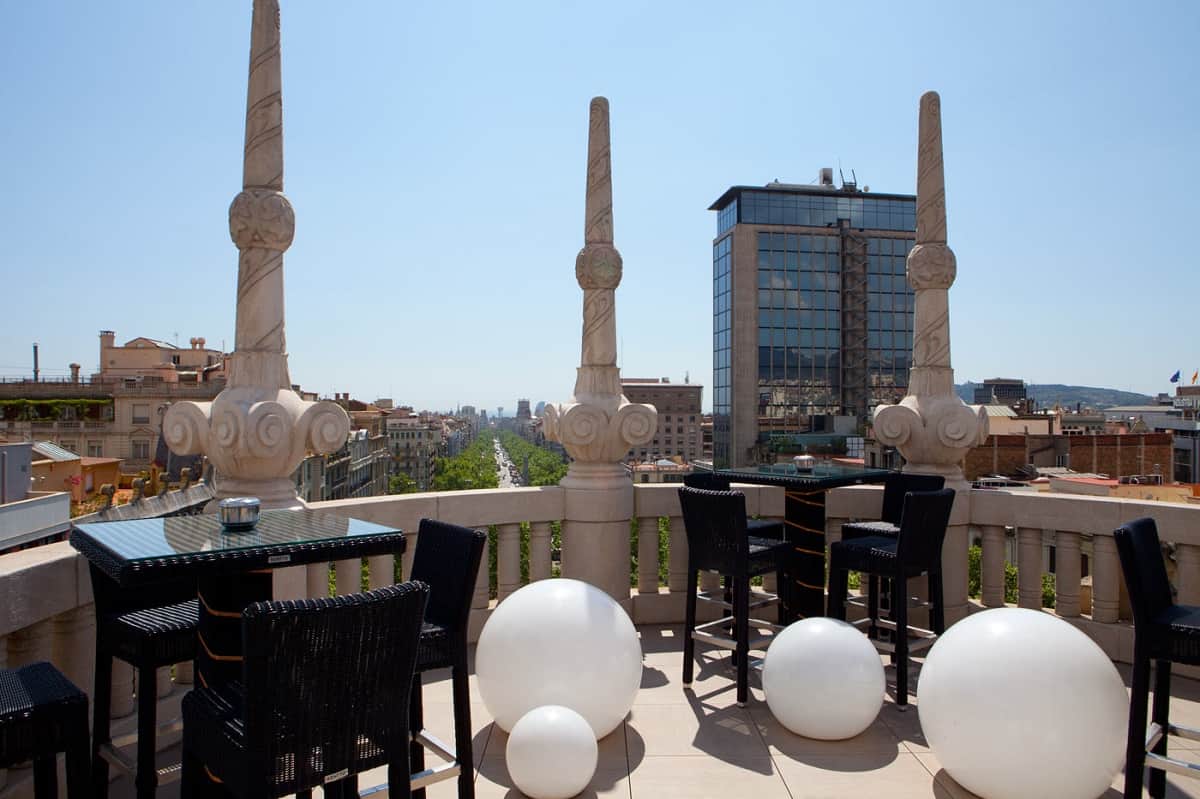 Formerly the palace of the Marquess of Comillas and later the headquarters of the Philippines Tobacco Company, Hotel 1898 boasts a large and fabulous roof terrace offering views in all directions.

The H10 Casa Mimosa in Eixample overlooks the rooftop of Gaudí’s Casa Mila and its ornate chimneys.

The Hotel Gates Diagonal terrace is unique in the city of Barcelona for its 360º panoramic view, where you can take in Montjuic, Tibidabo, the Port and Diagonal. 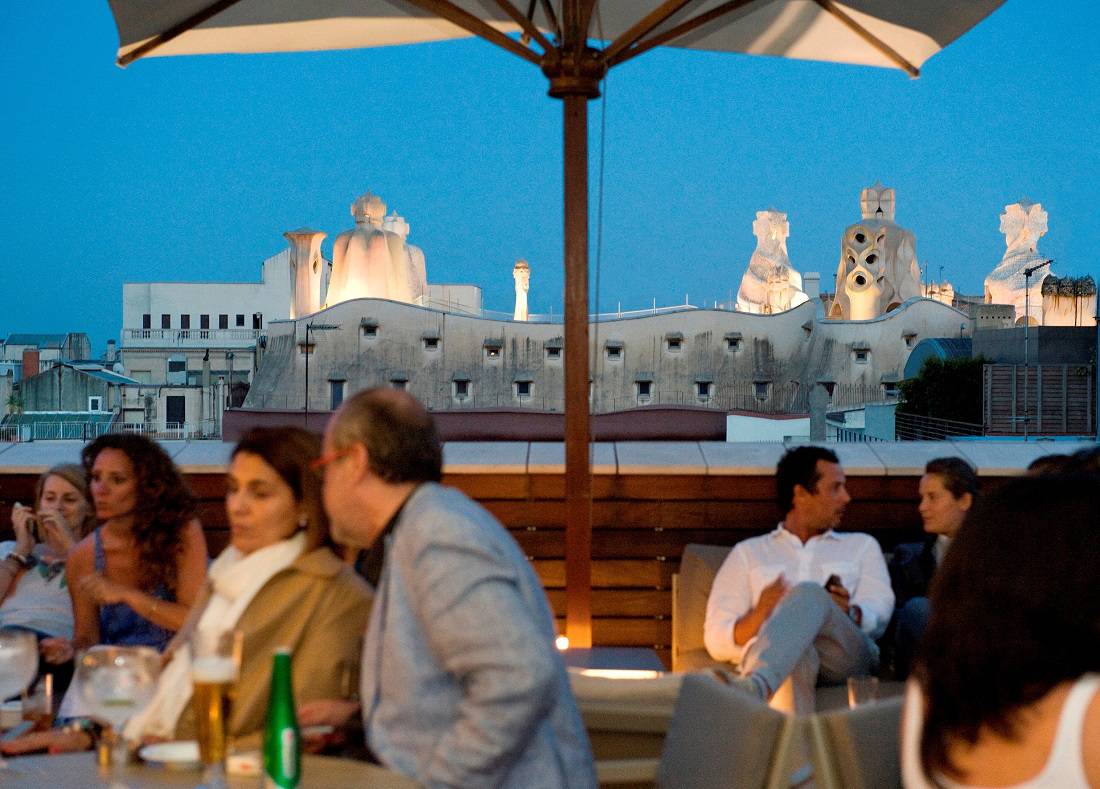 The stylish terrace of Sir Victor Hotel is situated at the top of Passeig de Gràcia and offers views of several architectural landmarks including Casa Milà and La Sagrada Família. 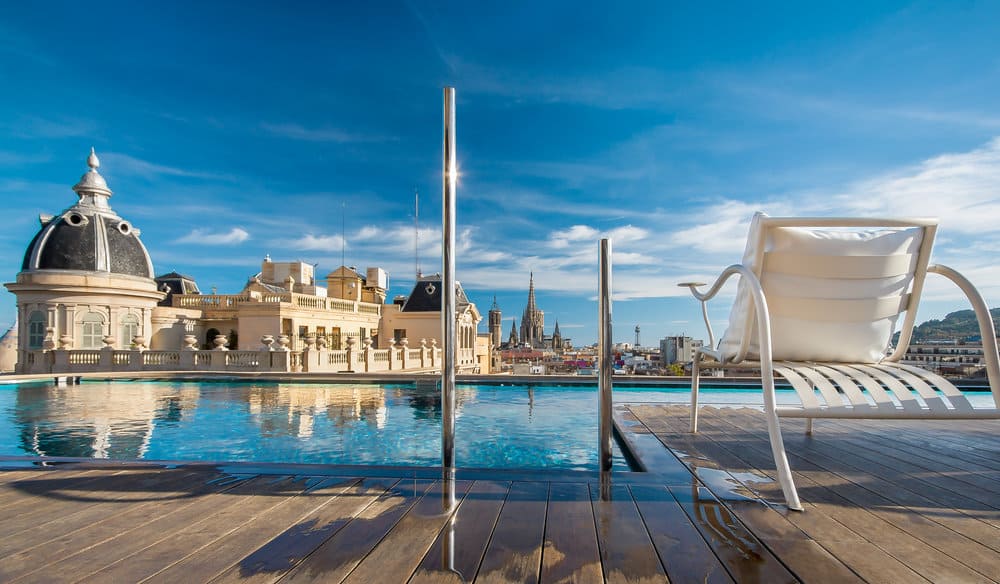 The terrace at Hotel OhLa feaures a see through glass swimming pool and views of the Barcelona Cathedral.

The stylish 28 room Mercer Hotel Barcelona is located within a unique heritage building with Roman features dating back to the 1st century AD. The roof terrace features a plunge pool and views over the historic Gothic Quarter.

Arenas de Barcelona is a former bull ring converted to a shopping center. The roof terrace includes a variety of restaurants and overlooks Plaça d’Espanya and the Museu Nacional d’Art de Catalunya (MNAC).

The WET Deck at the W Hotel Barcelona features an infinity pool, breathtaking views of the beachfront and is famous for it’s Sunday evening parties during the summer.

The terrace of Restaurante 1881 per Sagardi is one of the better kept secrets of the city. To reach the restaurant you must enter via the Museu d’Història de Catalunya and go to the top floor.

The terrace of the Art Deco building that houses the Mandarin Oriental Barcelona offers excellent views of Passeig de Gràcia.

Atik, the eighth-floor terrace of H10 Cubik has a plunge pool and majestic views over the Gothic Quarter.

The 11th floor roof terrace of Andante Hotel has sweeping views over El Raval and the Gothic Quarter and guests can take in the iconic architecture of the Sagrada Família, Barcelona Cathedral and even Torre Agbar in the distance.

Set on Plaça Reial in the heart of the Gothic Quarter, 5-Star Hotel DO Plaça Reial is a stylish gastronomic boutique hotel. The rooftop terrace, ‘El Terrat’ features a pool and views over the lively Plaça Reial.

The terrace of Hotel SB Glow in Glòries has unobstructed views over Torre Agbar and also the city reaching to the south.

The Eurostars Grand Marina Hotel terrace is spacious and has fantastic views over Port Vell.