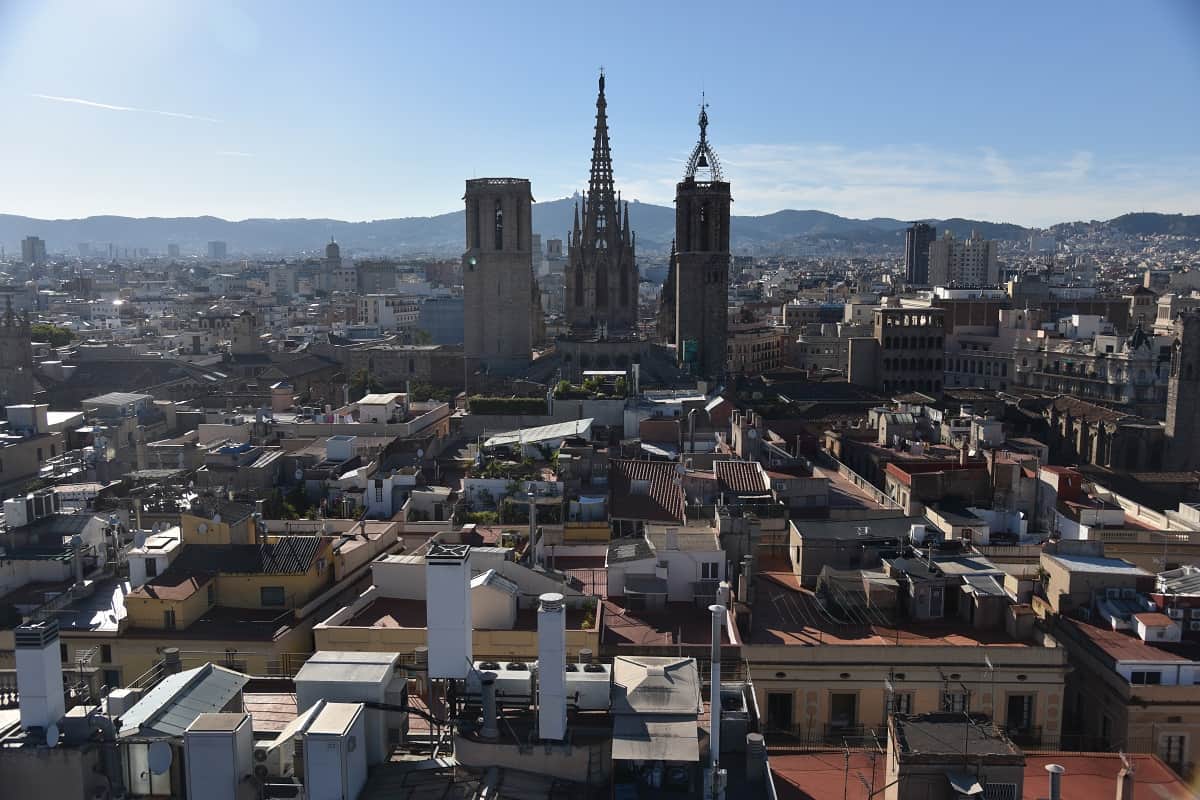 The labyrinthine Gothic Quarter lies at the heart of Barcelona, with many layers of history going back to the Roman town of Barcino. The neighborhood draws its name from its Gothic architecture, a style that flourished in Europe during the late Middle Ages from the 12th-16th centuries, often seen in cathedrals and churches.

The Gothic Quarter is surrounded by the neighborhoods of El Raval, L’Eixample and El Born. It can be easily reached via the metro stations of Liceu (L3) and Jaume I (L4) Drassanes (L3) and Plaça Catalunya (L1, L3).

The Romans founded the colony of Barcino 2,000 years ago. The center of Barcino was Plaça de Sant Jaume, where the Palau de la Generalitat de Catalunya and the Ajuntament de Barcelona (City Hall) are situated across from one another. In a nearby courtyard off Carrer del Paradís, you can find the remains of the Temple of Augustus. Parts of Roman Barcino’s wall still remain within the Gothic Quarter.

Landmarks of the Gothic Quarter include the Cathedral of Santa Eulàlia, the Church of Santa Maria del Pi,  Plaça del Rei, Basilica of La Mercè and Plaça Reial.

During the 13th century thousands of Jewish people lived in Barcelona, many working as doctors, scientists, scholars, merchants and money lenders. The medieval Jewish quarter was called El Call and here you can find the Synagogue Major, one of the oldest in Europe.

Many landmark Gothic buildings have elements that do not date back to the Middle Ages. In the late 19th and early 20th centuries, the quarter was completely underwent a major restoration project for the 1929 International Exposition. The neo-Gothic bridge over Carrer del Bisbe by Joan Rubió was built in 1928. The neo-Gothic façade of Barcelona Cathedral was constructed between 1882 and 1913 by Josep Oriol Mestres and August Font i Carreras.

MUHBA Plaça del Rei Opened to the public in 1943, this museum displays remains dating from Roman Barcino in the 1st century BC to the early Middle Ages. By going underground, visitors can explore streets of Roman Barcelona.

Museu de la Catedral The Museum of the Cathedral is located under the gallery of the Cloister, next to the chapel dedicated to Saint Lucia. Of special interest is The Pietà by 15th century Spanish painter Bartolomé Bermejo.

Setba Foundation Launched in 2009, Setba is multi-purpose space dedicated to the promotion of arts and culture in Catalonia. It is situated in the same flat overlooking Plaça Reial that the artist José Pérez Ocaña lived during the last year of his life, between 1982 and 1983.

Pla Restaurant Vaulted ceilings, contemporary artwork and an intimate candle lit atmosphere make Pla the perfect spot for a romantic dinner or special occasions. The menu has is inspired by Catalan cuisine with international influences.

Ocaña Named after the artist José Pérez Ocaña, the 1200 square meter space offers 2 different restaurants: the Café serving traditional Spanish cuisine and tapas and Ocaña DF, with food inspired from Mexico and Peru and cocktails of mezcal and tequila. On the basement floor there is a cocktail bar called Apotheke and a lounge, Bar Club Ocaña.

La Plata La Plata is situated in a seventeenth century building near Port Vell. It has a simple menu of only four classic dishes, which have not changed since it was founded in 1945. These are a simple salad of tomato, onion and Arbequina olives, botifarra (Catalan sausage), fresh anchovies and finally deep-fried sardines (pescaditos). Exceptional red, white or rosé wine from the Penedès region is served from straight from the barrel in small chupito glasses.

Ohla Hotel Located on the site where a palace of the first count of Barcelona once stood, Hotel Ohla carefully preserved the building’s historical façade from 1920 and other listed elements including the main staircase.

Hotel Duquesa de Cardona The Duquesa de Cardona Hotel Barcelona occupies a historic 16th century building, formerly the residence of Catalan nobility. The building was restored in 1850 and was later modernized and converted into a hotel in 2003. The building faces Barcelona’s Port Vell and enjoys superb sunlight from its unobstructed position by the Mediterranean sea.

Arai Aparthotel Barcelona This 31 room four-star superior boutique aparthotel is located in Barcelona’s historic center in the city’s Gothic Quarter. The eighteenth-century palace was bought in 2012 by Derby Hotels Collection. The original architectural features have been carefully preserved and the hotel features works of art from the private Clos Foundation collection as well as objects and photographs uncovered during the building’s renovation.

Jamboree Jamboree is a Zulu word meaning meeting of tribes. Legends such as Bill Coleman, Kenny Drew and Chet Baker have played at the club or in larger auditoriums under the organisation of the Jamboree managers. Musical activity now goes beyond jazz to also cover blues and the club hosts two concerts a day, 365 days a year.

Carrer de Petritxol This was the first entirely pedestrian city street in 1959. It is lined with art galleries, boutiques and chocolate shops. Opera singer Montserrat Caballé had her rehearsal studio here, next to the Granja La Pallaresa.

One of the most frequently asked questions is how safe is the Gothic Quarter? The Gothic Quarter has the same safety issues as other parts of the city, especially other neighborhoods within the Ciutat Vella. Unfortunately, there are still many instances of pickpocketing and petty theft. However, if you are careful about your bag and valuables (keeping them close to your person) and use common sense when going out late at night it is unlikely that you will have any problems.