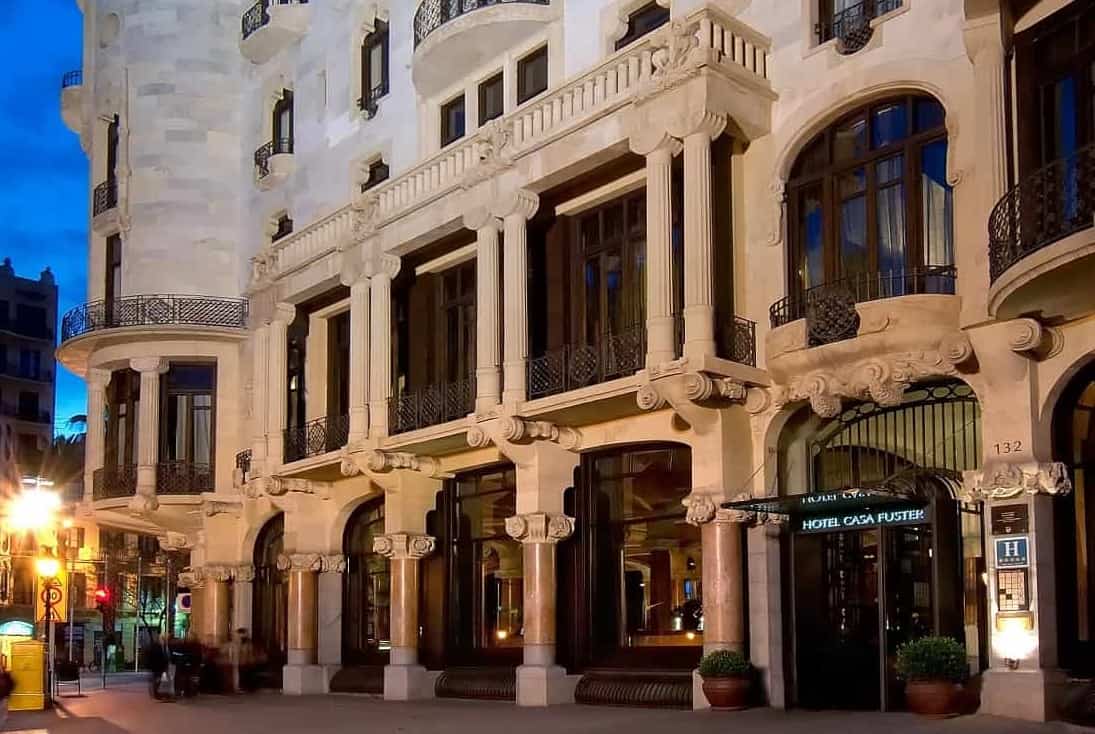 The historic five star Casa Fuster hotel was originally built in 1908 by Spanish Catalan architect Lluís Domènech i Montaner, one of the great architects of Catalan Modernism. Two of his works, the Palau de la Música Catalana and Hospital de Sant Pau have been declared World Heritage Sites by UNESCO. Casa Fuster was his last project in Barcelona, made in neo-Gothic and subtle modernista style.

The ‘casa’ was originally a gift from Mariano Fuster i Fuster, a high standing member of Mallorcan society, to his wife, Consuelo Fabra i Puig. It is considered to be one of the most expensive buildings ever to be built in Barcelona, in part due to the extensive white marble on the façade along with glass and slate. The Hoteles Center chain acquired Casa Fuster in 2000 for renovation and the hotel opened in 2004. Doormen wearing top hats and tails now usher guests into the opulent lobby of marble floors and columns.

The hotel’s famous Café Vienés has a history as an important meeting place for the intellectual and high society of Barcelona, including the Catalan poet Salvador Espriu. Every Thursday night between 9pm and 11pm, Café Vienés features live jazz. Artists such as Woody Allen (playing jazz clarinet), the Yoshida Brothers, Eddy Davis, Conal Fowkes, Doc Scalon Trio, New Orleans Rag Trio and the Barcelona Swing Serenaders have all played on its stage. Café Vienés was also a setting for one of the scenes in Woody Allen’s Oscar-winning 2008 film Vicky, Cristina, Barcelona. The Café has set menus on jazz evenings, including the price of admission.

The roof terrace, called Mirador Blue View overlooks the famous luxury shopping boulevard, Passeig de Gràcia. In the distance you can see the Mediterranean Sea. During the summer, the terrace features live music on Sundays. There is also a small outdoor swimming pool, which is open from 9.00AM to 9.00PM.

The hotel has 5 rooms adapted for guests with disabilities and Restaurante Galaxo is accessible for those with reduced mobility.

Recent guests include Johnny Depp, who was at the BCN Film Fest to promote his film Minamata at the cinema on Carrer de Verdi in the Gràcia neighborhood.

Gaudí’s masterpiece Casa Milà (La Pedrera) is a short distance from the hotel. Among neaby restaurants, make a visit to Tapas 24 (Avinguda Diagonal, 520) for gourmet versions of classic tapas. The nearest metro station is Diagonal (L3, L6, L7), just a 2 minute walk. A flank of cabs also sits in front of the hotel. The link below leads to our affiliate, Booking.com.