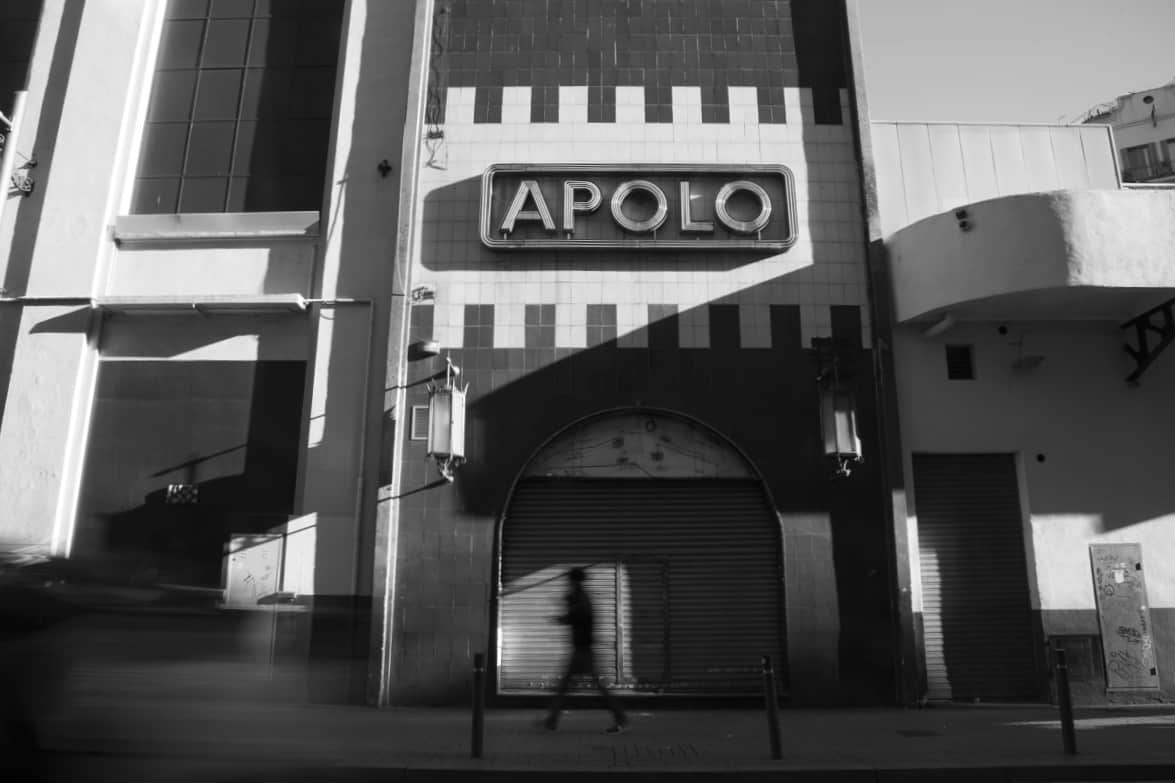 El Poble Sec (dry village in Catalan) is a neighborhood in the Sants-Montjuïc district of Barcelona. The name is often said to be due the neighbourhood lacking water sources for a long time. However, historian Miquel Badenas, argues that the origin of the name was due to mid-nineteenth century factories drying up the water wells. El Poble Sec lies between Montjuïc and Avinguda del Paral·lel and is served by Poble Sec (L3) and Paral·lel (L3) metro stations. Its surrounding nieghborhoods are El Raval, Sant Antoni and Sants-Montjuïc. The population of Poble Sec is multi-ethnic, with a strong presence of people from Pakistan, Bangladesh, the Dominican Republic and Ecuador.

During the Middle Ages, the land outside Barcelona’s city walls was used for agriculture. During this time orchards stood on the land between the city walls and Montjuïc. In the second half of the 18th century and the beginning of the 19th century, manufacturing activities began to take place in what is now El Poble Sec. The medieval walls of Barcelona were demolished in 1854 and from 1858 houses were built for workers. The neighborhoods of França Xica, Santa Madrona and Huertas de San Beltrán emerged at this time, later to be grouped together and called El Poble Sec.

The singer-songwriter Joan Manuel Serrat is one of the most important figures of Catalan and Spanish popular music. He wrote many songs about Catalonia after the Civil War, inspired by his childhood in the Poble Sec neighborhood. 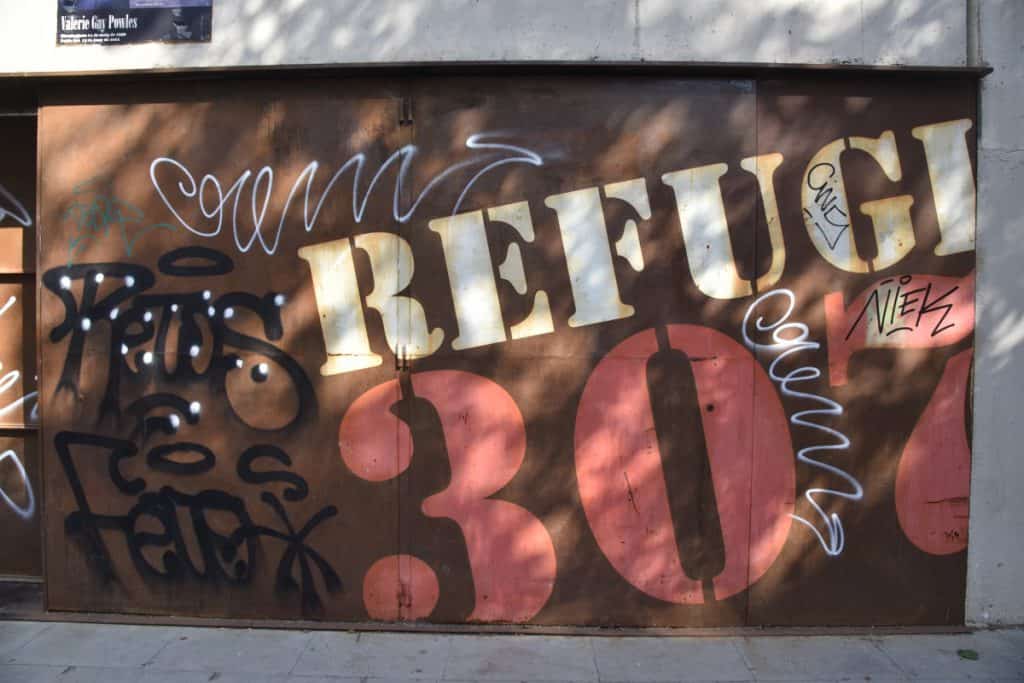 Refugi 307 One of many bomb shelters built in Barcelona during the Spanish Civil War (1936-1939), Refugi 307 was made by members of the local community. One of the largest built in Barcelona, it has about 400 meters of tunnels, 2.10 meters high and between 1.5 and 2 meters wide. The refuge was well equipped with various rooms including a kitchen, a first aid area and toilets. 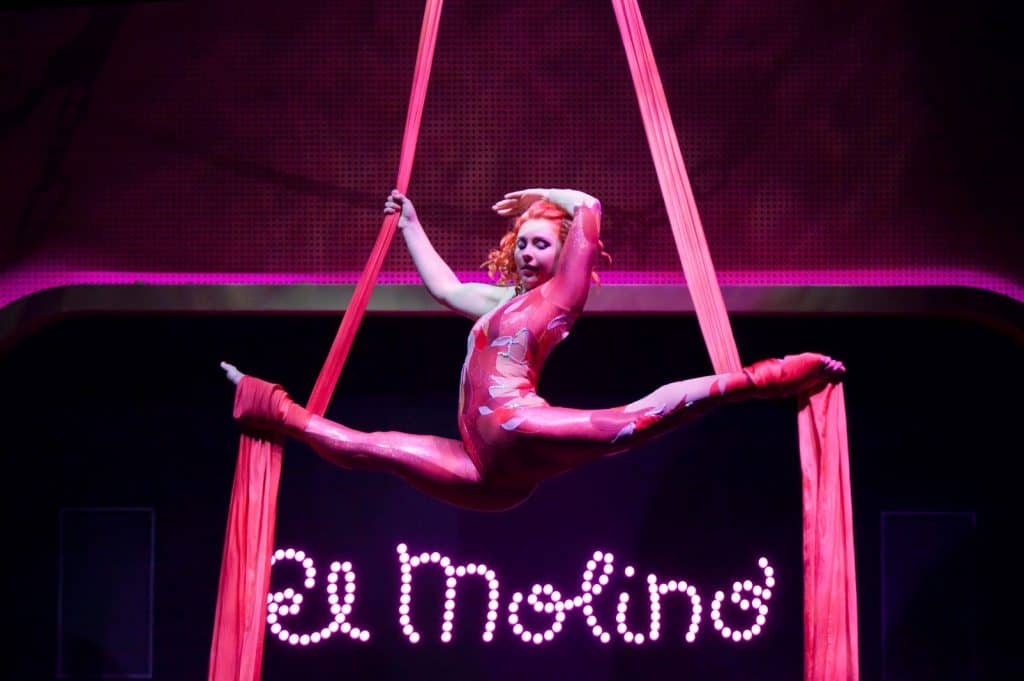 The theatres of Poble Sec blossomed during the period after the Civil War, when people sought a distraction from the tragic years they had endured.

El Molino El Molino (the mill) dates back to 1898 and is a known for its performances of music, theater, flamenco, burlesque and cabaret.

Teatre Condal Dating back to 1903 Teatre Condal specializes in comedy. It has hosted popular productions such as Mamaaa! and La cena de los idiotas (the dinner of idiots) and A Spanish-language version of Jonathan Larson’s musical Rent. 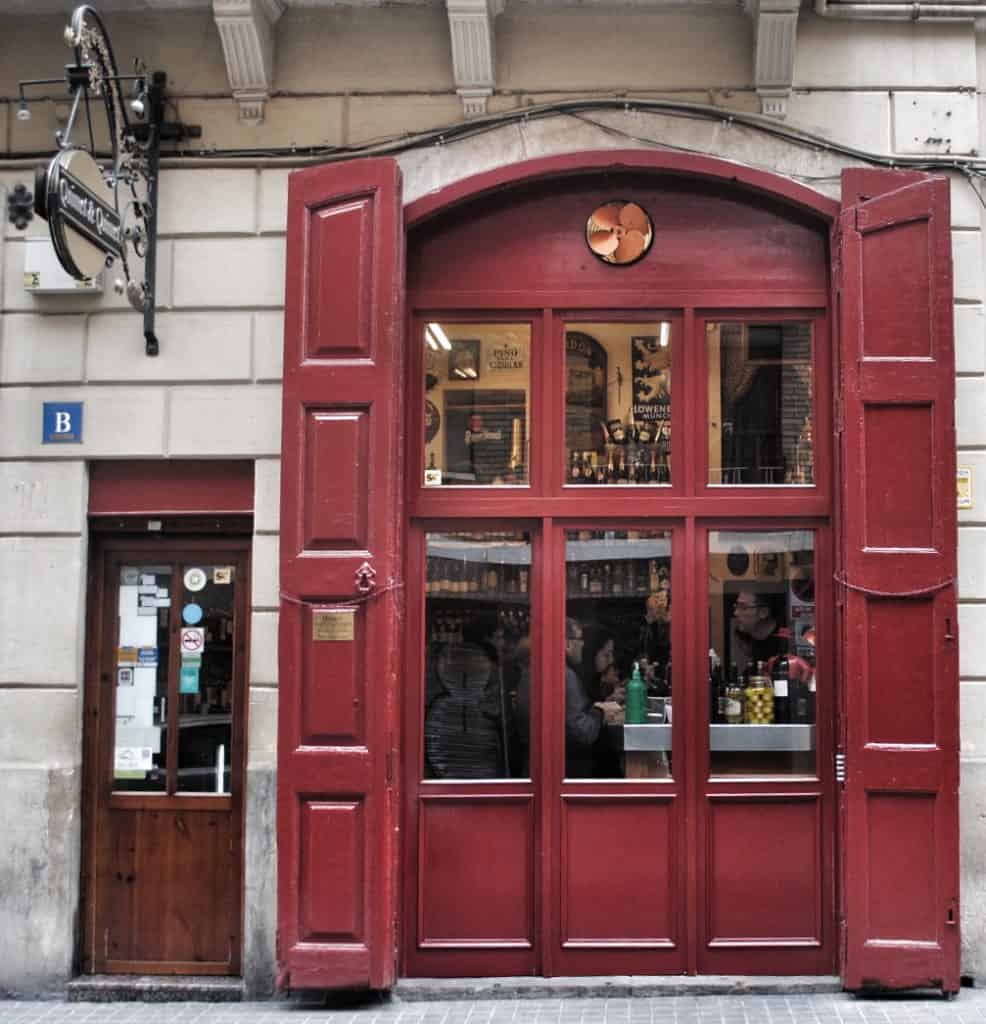 Xemei Xemei is located in a charming area of Poble Sec, at the foot of Montjuïc near the Teatre Grec. The restaurant was started by two Venetian twins, Stefano and Max Colombo after discovering a lack of good Italian restaurants in Barcelona.

Quimet & Quimet Opened in 1914 and located off the standard tourist track in the heart of El Poble Sec, Quimet & Quimet offers superb tapas and montaditos (small open faced sandwitches). The family run bar is staffed by several generations of Quimets.

Bodega 1900 Albert Adrià’s Bodega 1900 recalls the cherished local tradition of Sunday vermouth. Situated across the street from Tickets Bar, Bodega 1900 is one of six projects that Albert Adrià has in Barcelona’s Poble Sec and Sant Antoni neighborhoods.

Pakta Pakta was launched in 2013 by the culinary dream team of the Adrià brothers (Albert and Ferran) along with the Iglesias brothers. Michelin starred Pakta offers Nikkei cuisine; a fusion of Peruvian and Japanese culinary traditions.

ManoRota ManoRota was launched in 2015 by Bernat Bermudo and Oswaldo Brito, veterans of several top restaurants and alumni of Barcelona’s Hofmann culinary school. Mano Rota literally means ‘broken hand’ and is a Spanish idiom that describes consummate skill. ManoRota serves a unique cuisine with both Mediterranean and international influences. Hotel Brummell Surrounded by many cultural gems and in a residential area, Hotel Brummell offers an experience of living like a local. The boutique hotel has twenty designer rooms and two 80 square meter apartments. The building’s facade dates back to 1870, but the interior has been completely transformed by architect Inma Rábano.

The Student Hotel This is a budget friendly option situated in the heart of the neighborhood on Avinguda del Paral·lel.

Sala Apolo One of the oldest dance halls in Europe, Sala Apolo dates back to the early 20th century. It has had various incarnations over the years; starting as an amusement park and transforming into a dance hall, a bingo venue, a professional skating club and a nightclub. In 2018 Sala Apolo celebrated their 75th anniversary with the premiere of the documentary La Juventud Baila directed by Marc Crehuet. Since becoming a concert hall and club in the 1990’s, the venue has hosted over 11,000 groups and 5,500 DJ’s.

El Rouge Historically a favorite haunt of the dancers of El Molino, this lounge-cocktail bar features DJs, poetry readings and cabaret shows. The kitch and dimly lit interior gives an underground feel and the scene is cosmopolitan and unpretentious.

KOETANIA KOETANIA BARCELONA is an independent jewellery brand co-founded by Daniel Bellido, a sculptor and jeweller for 20 years and Marta S. Blanco, a former architect with 8 years of experience as a jeweller. CREC The Crec community lives in a converted warehouse, a cozy and open space where ideas have no limits. Crec offers meeting rooms, a relaxation space, therapy room, an office and also a photostudio.

La Vaca La Vaca is a former dairy turned into a creative and relaxed coworking space in the heart of Poble Sec. Here you can get some serious work done and grow your network within an incredible community.