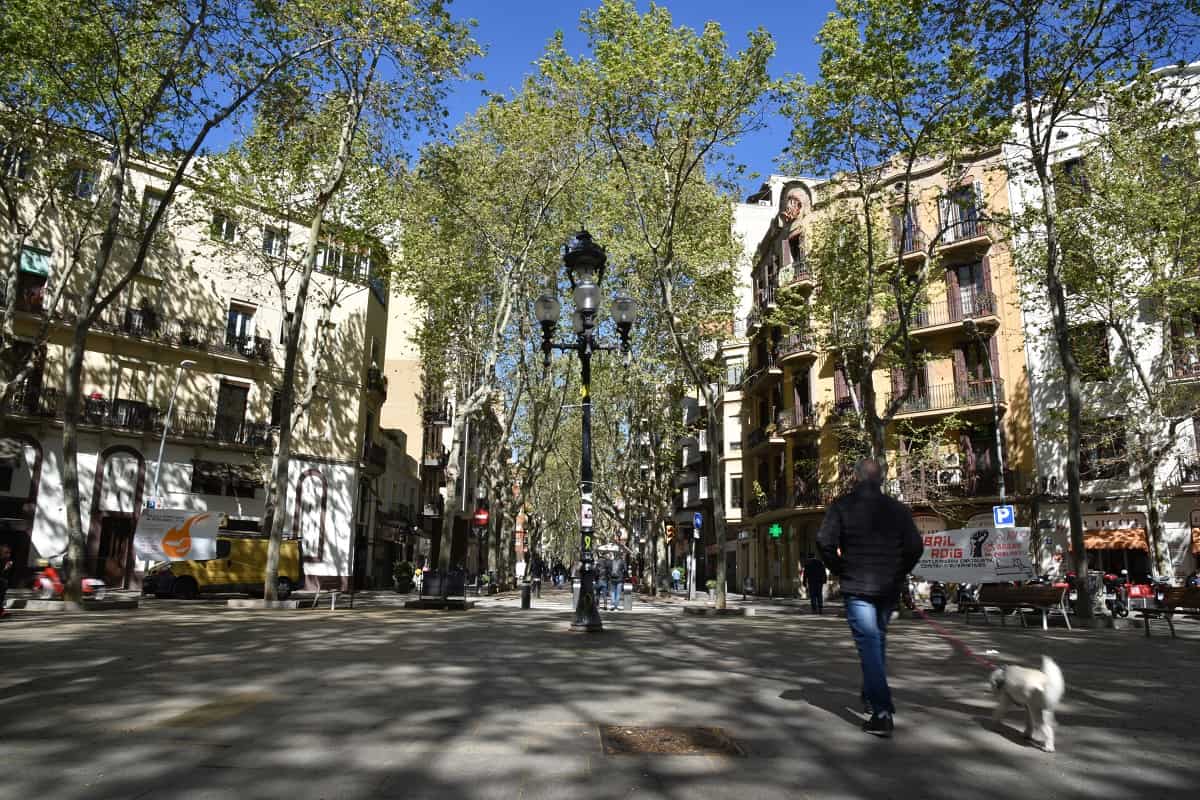 El Poblenou is a northern neighborhood of Barcelona, contained within the district of Sant Martí. It has been called the Catalan Manchester for its history as an important industrial center. More recently it has gained a reputation as a hub for technology and innovation.

The land that El Poblenou occupies was once marshy, which is recalled by Llacuna street and metro station (Llacuna is Catalan for lagoon). Between the 12th and 13th centuries, the area was used to farm cattle and some masías (farmhouses) were built. Until the eighteenth century the land was only used for agriculture.

The industrial revolution in Sant Martí began in the early nineteenth century. Around 1840-50 the concentration of houses in the south of Sant Martí was called Taulat or “Pueblo Nuevo” hence the origin of the name Poblenou. During the Industrial Revolution El Poblenou had the highest concentration of industry in Spain. A broad range of industries were represented in the neighborhood, including the production of oils, wines, textiles, metal and machinery.

With the decline of industry, the neighborhood fell into a state of abandon for many years. The Olympic Games in 1992 played a major role in revitalizing El Poblenou. La Vila Olímpica del Poblenou  was constructed in the late 1980s and early 1990s to house athletes for the games. More recently the high tech 22@ initiative has played a major role in transforming the neighborhood.

Museu del Disseny The Design Museum of Barcelona works to promote better understanding and good use of the design, acting as both a museum and laboratory. The museum covers multiple aspects of design, including space design, product design, information design and fashion.

Can Framis Museum This museum of contemporary art is housed in converted factory that was built at the end of the 18th century. Can Framis opened in 2009 and displays around 300 works dating from the 1960’s on by a wide range of artists born or living in Catalonia.

Espai Subirachs Dedicated to the work of the artist Josep Maria Subirachs, this museum opened in 2017 and is situated in a private property on Batista Street. Josep Maria Subirachs (1927-2014) was a Catalan sculptor, painter, engraver, scenographer and art critic. His work can be found across the globe but he is most famous for the sculptures on the Passion Facade of La Sagrada Família.

Xiringuito Escribà was founded in 1992, the year that the Olympic Games were held in Barcelona. Escribà offers a fantastic view over Bogatell beach and the sea. The restaurant is best known for it’s paella and rice dishes, but founder Joan Escribà is also famous for hailing from the famous baking family behind the Pastelería Escribà Gran Via which dates back to 1906. This explains the fabulous deserts at this restaurant.

Els Pescadors is located near the sea front in the charming Plaça de Prim in the heart of Poblenou. The restaurant is situated in an old tavern that dates back to 1848 and is surrounded by the white houses that once belonged to fishermen.

The ultra modern Gates Diagonal Barcelona was designed by architect Juli Capella. The hotel stands next to the iconic Torre Agbar, designed by Jean Nouvel.

Ilunion Barcelona A 10 minutes walk from Bogatell Beach, this hotel features a rooftop swimming pool, sun terrace and a gym with views of the city and the Mediterranean Sea.

Razzmatazz is an iconic nightclub and concert venue that was established in 2000. Dubbed a ‘super club’ and with a capacity for 2,500 people, it has five unique rooms playing different styles of music.

Situated between Nova Icària and Mar Bella beaches, Bogatell beach is Poblenou’s main beach. It is a popular spot for volleyball and on a windy day you might see kitesurfers out. A little to the north, Mar Bella beach has a nudist area and is popular among the gay community.

Palo Alto Market This trendy outdoor market on the grounds of the Gal i Puigsech factory (1875) takes place the first weekend of every month. The space is otherwise used as a center for cultural and artistic creation, accommodating professionals in the world of plastic arts, communication and design.

Approved by the Barcelona City Council in 2000, the 22@ urban and economic renewal project has made El Poblenou a major hub for technology and innovation. The objective of the scheme is to transform the old industrial areas of Poblenou into a high-quality environment for working, living and learning. The Media-TIC Building pictured above serves as a meeting point for companies and professionals within the 22@ district of Barcelona. It is occupied by Open University of Catalonia, Internet Interdisciplinary Institute (IN3), eLearn Center and Barcelona Digital Technology Center.