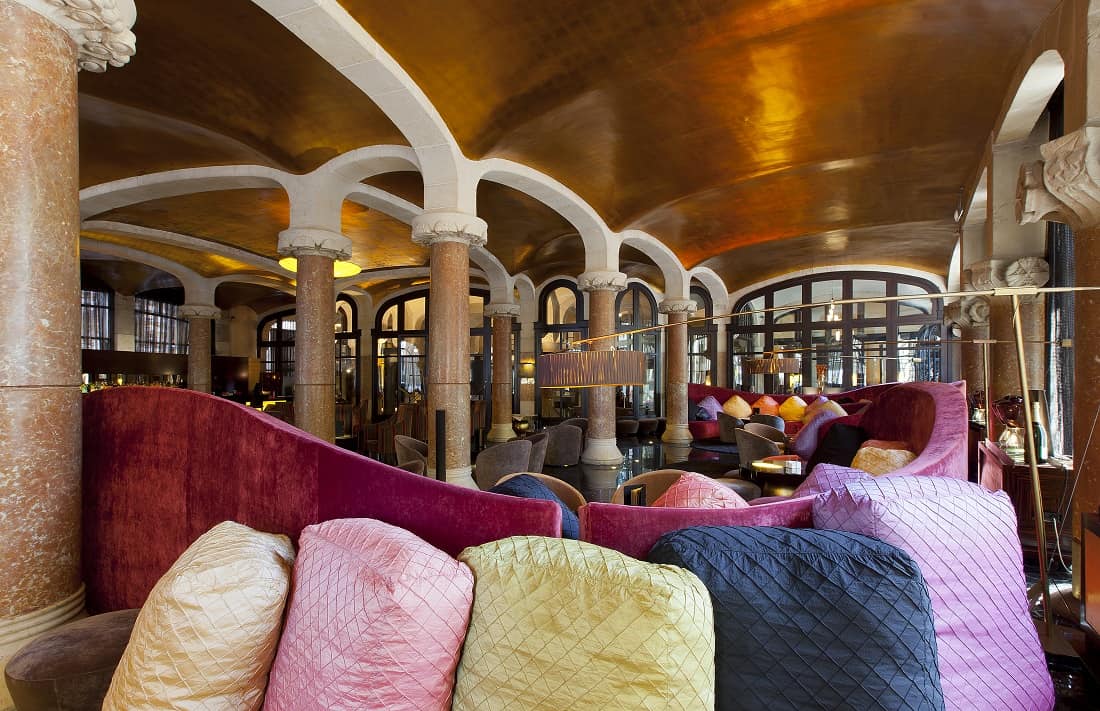 Discover the best boutique hotels in Barcelona, from a medieval palace to a modernist masterpiece.

Housed in two historic and artistocratic houses, one of which being a 12th century medieval palace, Hotel Neri is located in the heart of Barcelona’s old Jewish Quarter. The beautiful Carrer del Bisbe and Cathedral of Barcelona are just around the corner from the hotel. The boutique hotel offers 22 exclusive rooms and suites, some including balconies or terraces. Other rooms feature murals on gold and silver. The bathrooms are finished in quartzite, a rock said to have theraputic properties. The gastronomic Neri restaurant, looks out onto the historic Plaça Sant Felip Neri.

Hotel DO is housed in a historic building on Plaça Reial, dating back to 1856 and completely renovated in 2011. Most of the five star Grand Luxe hotel’s 18 rooms offer views over the majestic and lively plaça. A roof terrace, small swimming pool, solarium and spa are available to guests. The gastronomic offerings of the three restaurants of the boutique hotel – La Cuina, La Terrassa and El Terrat – reflect their focus on the use of authentic local produce.

The historic five star Casa Fuster hotel was originally built in 1908 by Spanish Catalan modernist architect Lluís Domènech i Montaner. The ‘casa’ was originally a gift from Mariano Fuster i Fuster, a high standing member of Mallorcan society, to his wife, Consuelo Fabra i Puig.The Hoteles Center chain acquired the building in 2000 for renovation and the hotel opened it’s doors in 2004.

The Arai Aparthotel is in a historic 18th century building and offers 31 luxury rooms. This classic boutique hotel also offers an outdoor swimming pool, a gym with sauna and a terrace with city views. The rooms are stylish and minimalistic with exposed stone walls and large windows. Three of the rooms, located on the top floor feature private terraces and hydro massage showers. The hotel sits on the bustling Carrer Avinyo, one of the major arteries within the Gothic Quarter, a short walk from the Ramblas and many of Barcelona’s major attractions.

The 28 room Mercer Hotel Barcelona is situated within a restored a heritage building, whose origins go back to the 1st century AD, with a section of the Roman wall of ancient Barcino within the hotel itself. The architectural restoration project was led by Rafael Moneo, who skillfully intertwined original features and new construction.

Set in the heart of the fashionable El Born neighborhood, the K+K Hotel Picasso is within walking distance of numerous cultural attractions (including the Picasso museum) as well as the Barceloneta beaches. The 92 room boutique hotel overlooks the charming Parc de la Ciutadella, which dates back to the mid-19th century.

Also located in the El Born neighborhood, Musik Boutique Hotel is the most budget friendly destination on our list. Musik has an eighteenth century facade along with a modern interior. The 23 room hotel is near one of the most iconic architectural destinations of the city; Domènech i Montaner’s Palau de la Música.

Famous for both it’s hotel and restaurant, the exclusive ABaC Barcelona is set on Avinguda Tibidabo in the affluent Sant Gervasi neighborhood. The smallest on our list of Barcelona boutique hotels, ABaC offers 15 modern luxury rooms along with its 2-star Michelin restaurant, run by renowned chef Jordi Cruz.

Hotel Brummell is situated in the Poble Sec neighborhood, off the beaten tourist trail but surrounded by many cultural gems. Owned by photographer Christian Schallert, the boutique hotel has twenty designer rooms and two (80m²) apartments.

Located in the fashionable Eixample neighborhood, The Mirror is a 63 room boutique hotel opened in 2011. The hotel’s award winning design uses a dual theme of white and mirrors throughout.

Opened in early 2016, Casa Bonay is a collaborative boutique hotel in Barcelona’s Dreta de l’Eixample neighborhood. The hotel has 67-rooms and occupies the restored 19th century mansion of the Bonay family, built in 1869. The building has been revitalized while maintaining original features to create an energetic, creative hub.