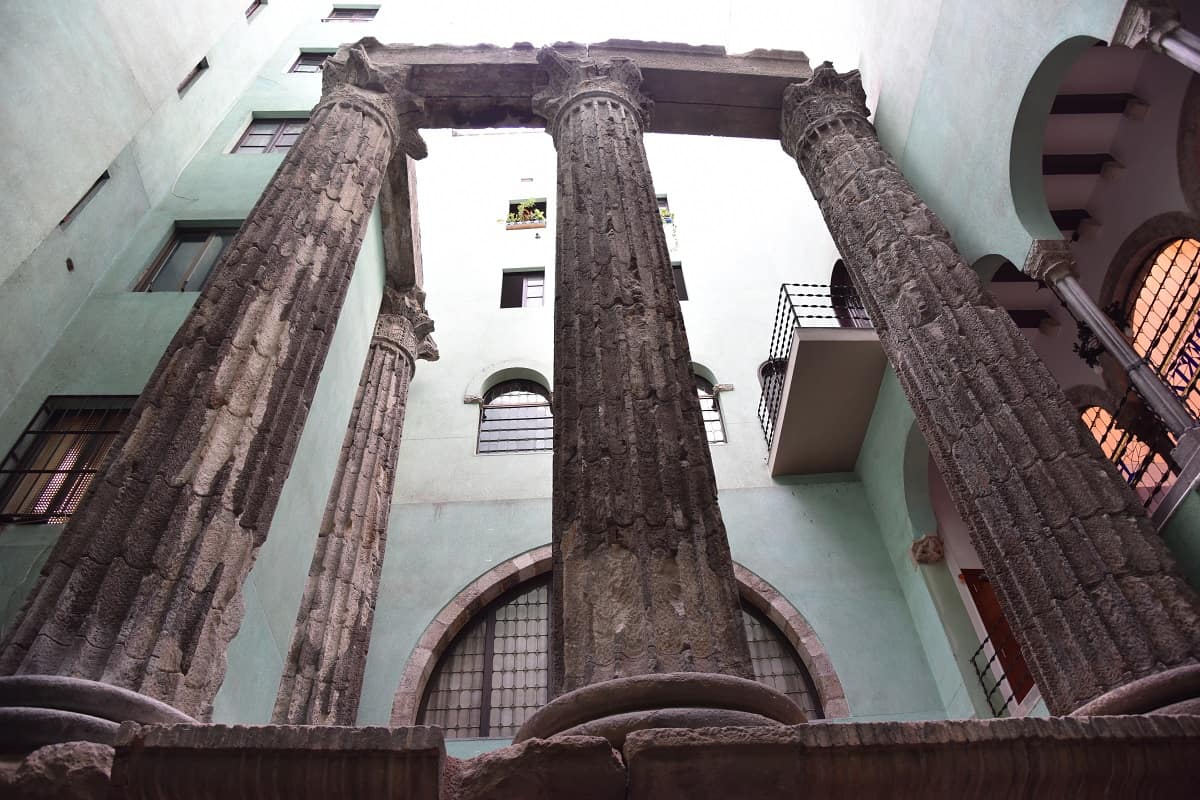 Barcelona traces its origins over 2,000 years ago to the Roman colony called Barcino. It was founded by Emperor Augustus during the period of 15-10 BC, and the full Latin name of the colony was Iulia Augusta Faventia Paterna Barcino. Many remains of Barcino still exist in various locations of Barcelona’s Gothic Quarter.

The land area where Barcino was founded was already populated, mainly by the ancient Iberian Laietani tribe (from which the street name Via Laietana is derived). As a colony, Barcino was established to distribute land among retired soldiers. It was less important than the major Roman towns of Tarraco (Tarragona) and Caesaraugusta (Zaragoza).

A wall was built around Barcino between the 1st and 2nd centuries AD, which was reinforced between the third and fourth centuries and it marked the city perimeter that remained until the Middle Ages. By the second century AD Barcino had a population of 3500–5000. The main economic activity was cultivation of the surrounding land, and its wine was widely exported.

Plaça de la Vila de Madrid reveals a section of the Roman road called Vía Sepulcral, which lay outside the walls of Barcino. The relics were discovered in 1956 by construction workers. During the first to third centuries Roman law prohibited burials within the city and the dead were buried outside the walls along roads.

The tombs that can be seen on Via Sepulcral mark the resting places of lower and middle class Roman citizens, such as slaves and freedmen, dating from the second and third centuries AD. On Tuesday and Sunday it is possible to enter the necropolis and see the tombs up close and there is also a small museum adjoined. For more details see here.

The walls of a building on Carrer de Duran i Bas contain the remains of four arches from a Roman aqueduct that once led to the entry towers of Barcino called Porta Praetoria.

Carrer de la Palla begins in Plaça Nova and on this street you can see a long section of Roman wall and defense towers dating from the 4th century AD. During the middle ages buildings were erected on top of the wall and some of the original tower openings were made into Gothic style windows. The wall was approximately 16 meters high, covered a total distance of 1,350 meters and had 74 defence towers.

In Plaça Nova features two sections of Roman wall and two square towers from the second city wall, built in the fourth century AD. It was here that carriages and pedestrians once entered the city from the north through the main gate called Porta Praetoria.

This is where Carrer del Bisbe now begins and follows the same route as Decamanus Maximus, one of the two main streets in the Barcino. In the fifteenth century the adjoining Casa de l’Ardiaca (Archdeacon’s house) was built. Plaça Nova also features a reconstructed section of an aqueduct that led into Barcino and a sculpture by Joan Brossa which spells out the name Barcino.

This square facing Via Laietana is named after Ramon Berenguer, the Count of Barcelona between 1096 and 1131. It features a statue by Josep Llimona of the count on horseback. Behind the statue lies the Roman wall dating from the early 4th century AD and the Gothic chapel of Santa Àgata which was built on top of it. This section of wall begins in Carrer de la Tapineria.

Mosaic with geometrical motifs, from a domus of Barcino, 4th century AD.

The Temple of Augustus was built in the 1st century BC and dedicated to Emperor Augustus. It was 37 meters long, 17 meters wide with six columns at the front. The temple was situated in the forum area in what is now Plaça de Sant Jaume.

Four 9 meter tall columns from the Temple of Augustus can be seen at Carrer del Paradís 10-12. The temple was reconstructed by the architect Puig i Cadafalch in the early 20th century. Outside Carrer de Paradis 10, a millstone marks Mont Tàber, which was the highest point of Barcino. Carrer de Paradís is said to take its name from a beautiful garden that once existed in the area around the temple.

Remains of the first Roman wall and a tower from the second Roman wall can be seen here.

The section of Roman Wall on Carrer del Sotstinent Navarro is the continuation of the wall in Plaça Ramon Berenguer.

This plaça near the port features a round Roman tower that was part of the second Roman wall.

At number 4 Carrer Correu Vell, there is a passage that leads to a courtyard where there is a section of Roman wall with two defense towers.

The Pati Llimona Civic Center reveals remains of harbor baths and the second main city gate, Porta Decamunus, the entrance from the harbor. In 2012, work on the Pati Llimona Centre Civic uncovered another 17 metre stretch of Roman wall.

The museum of archaeology on Montjuïc houses Roman artifacts from Barcino, including mosaics and sculptures.

The museum also houses Greek artefacts including a statue of Asclepius from the 3rd century BCE which was discovered in Empúries on the Costa Brava.

Several annual festivals celebrate the Roman heritage of the region. Badalona hosts the Magna Celebratio festival in late April and Tarraco Viva is a festival held in Tarragona in May.

The video below shows an animation of what Barcino looked like in the third century AD.