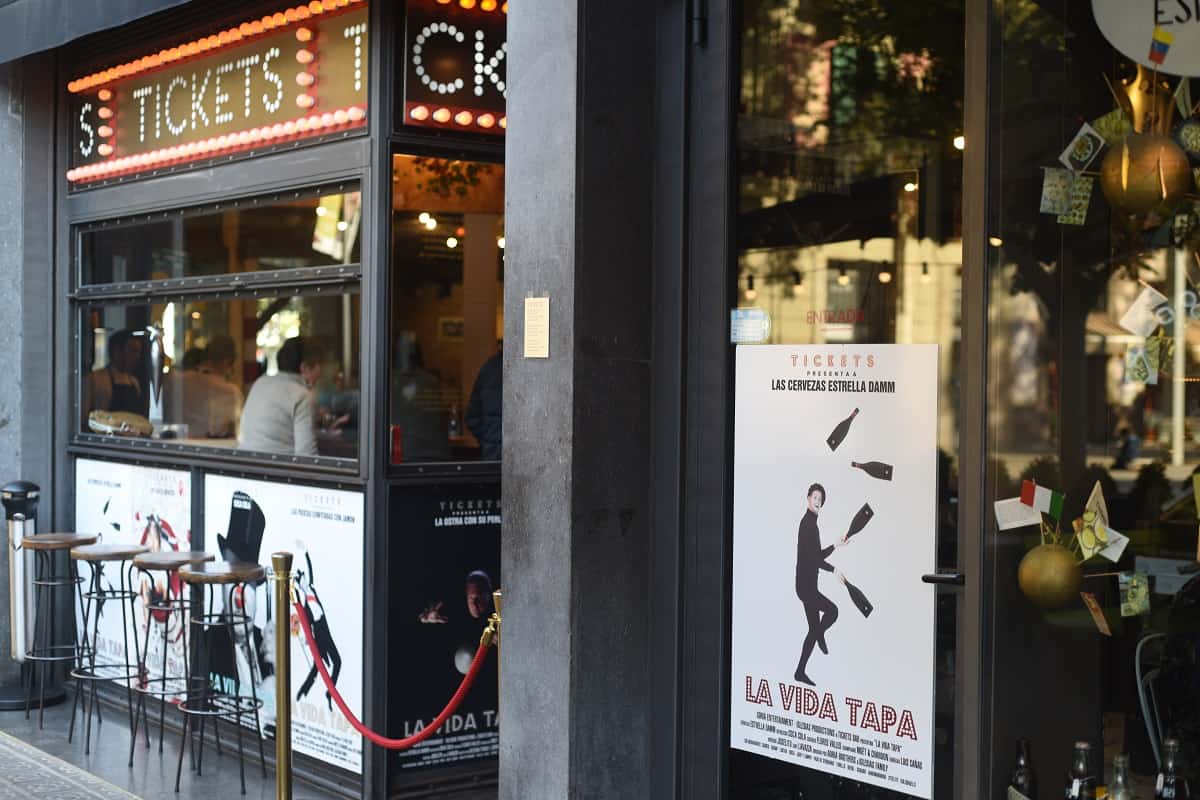 A tapa is a small portion of food, similar to an appetizer. Some common examples in Barcelona include Patatas Bravas, Pan con Tomate and Croquetas. Tapas can be combined to make a full meal and the 18 restaurants on our list have made an art of it.

When Ferran and Albert Adrià launched Tickets Bar in 2011, expectations were high. The brothers earned fame at the legendary elBulli, which received 3 Michelin stars and was named best restaurant in the world 5 times by Restaurant magazine. The Adriàs are known for their ‘deconstructivist’ style of cooking and classics such as the elBulli liquid olives remain available at Tickets.

Located in El Born, Cal Pep is often cited as the best tapas restaurant in Barcelona. Long lines of locals and well informed tourists are often seen snaking in front of the door. Pep recommends cloïsses amb pernil (clams and ham) or the trifàsic (combo of calamares, whitebait and prawns).

Located off the standard tourist track in the heart of Poble Sec, Quimet & Quimet offers superb tapas and montaditos. Traditional preserved foods, known as conservas, form an important part of the menu. The family run bodega dates back to 1914 and is staffed by several generations of Quimets. While the space is small the atmosphere is charming and convivial.

Pinotxo Bar in La Boqueria market specializes in hearty Catalan cuisine. It is world famous for dishes such as the Chipirónes con Mongetes (baby squid with white beans). Another classic is the Arroz Caldoso con Bogavante, a soupy rice in seafood broth made with Galician lobster purchased from a seafood vendor in the Boqueria. Those with a sweet tooth should try the Xuixos; a deep-fried Catalan doughnut with light custard filling.

Bar El Velódromo is a true gem and a personal favorite situated in Eixample. Large windows, chrome and marble highlight the art deco interior. Velodromo was known historially as a popular meeting place for intellectuals and it is said that civil war plots were hatched within its walls. Executive chef Jordi Vilà produces a rich array of dishes and tapas that represent Catalonia’s gastronomic heritage. Try the mejillones con hinojo y limón (mussels with fennel and lemon).

The family run El Xampanyet dates back to 1929. This bodega is located in El Born, situated on the historic Carrer de Montcada near the Picasso museum. Its name comes from the cava called Xampanyet. Try the Cantabrian anchovies along with the cava of the house.

El Quim de la Boqueria has been running since 1987 and has earned a reputation among the top tapas bars in the city. International foodies, locals and chefs flock to eat at El Quim’s counter in the middle of Barcelona’s most famous market. Try Quim’s famous Huevos con Chipirones (fried eggs with baby squid).

Alta Taberna Paco Meralgo, located in the Esquerra de l’Eixample is popular among locals and is said to match the quality of Cal Pep, with less hype (and fewer tourists). The name is a play on the words, ‘para comer algo’ (‘to eat something’). The restaurant creates unique tapas using market fresh products and offers unusual delicacies such as Espardenyes (sea cucumbers).

Ciudad Condal (Ciutat Comtal in Catalan) is the old name for the city of Barcelona, originating from the era when it was the seat of the Count of Barcelona. The bustling restaurant is a short walk from Plaça de Catalunya and offers a large variety of tapas along with an impressive selection of imported beers.

Cervecería Catalana belongs to the same family as Ciudad Condal. Located further up Rambla de Catalunya, the restaurant is a favorite among locals and is a popular place for to dine or have a drink after work.

Facing the Plaça Del Poeta Boscà in the heart of the seafront Barceloneta neighborhood, La Cova Fumada is usually brimming with locals enjoying their favorite tapas. The ubiquitous bomba (a deep fried potato ball with meat filling served with spicy sauce) is said to have been invented here.

Located in Raval near the Gran Teatre del Liceu and La Rambla, Bar Cañete offers a rich variety of traditional tapas. The family run restaurant uses fish and seafood fresh from Catalan markets along with seasonally and locally sourced produce.

The name La Pepita is derived from the pepito, a traditional Spanish steak sandwich. Their versions, called pepitas are lighter and come with a variety of fillings. Try the Pepita Napolitana with mozzarella and sun dried tomatoes or the salmon Pepita. Another specialty of the restaurant are trifásicos, consisting of two tapas and one canned-tapa. Creative tapas dishes such as the pumpkin salmorejo with Iberian ham or the sardines coca are among local favorites.

La Plata has a simple menu of only four classic dishes, which have not changed since it was founded in 1945. These dishes are a simple salad of tomato, onion and Arbequina olives, botifarra (Catalan sausage), fresh anchovies and finally deep-fried sardines (pescaditos). Exceptional red, white or rosé wine from the Penedès region is served from straight from the barrel in small chupito glasses.

Albert Adrià’s Bodega 1900 recalls the cherished local tradition of Sunday vermouth. Chef Ferran Soler draws from classic recipes of the early 20th century and adds a contemporary perspective. Ingredients are of the highest quality and have earned Bodega 1900 the reputation as one of the finest restaurants in Barcelona.

Bar Tomás is most famous for its patatas bravas – often cited as the best in Barcelona. Situated in the middle of Sarrià’s Calle Mayor, the restaurant is unassuming in its decor and the food is also modestly priced.

La Esquinica is situated in the little known El Turó de la Peira neighborhood of Barcelona, way off the beaten track of tourists. The establishment has been a local favorite since 1972, famous for it’s authentic tapas and convivial atmosphere. The restaurant has a terrace and a spacious interior with pretty Aragonese tiles on the bar.

Chef Daniel Rueda earned his reputation at La Dama and Comerç 24 and works alongside his wife Natalia. The original restaurant on Carrer Montcada in El Born has been joined by a second location in the heart of Gràcia. The menu fuses traditional dishes with a creative touch, using fresh market products. Jabugo ham croquettes, meatballs with cuttlefish stew and truffled eggs with foie gras are among the specialties of the house.

Situated in the trendy El Born neighborhood, Bormuth is famous for its traditional tapas and homemade vermouth. Try the croquetas caseras or the berenjena rebozada y miel (breaded aubergine with honey) The interior interior is cozy and a large terrace overlooks the Mercat Del Born.

Situauted on Carrer de Consell de Cent near many of Barcelona’s top art galleries, Vinitus specializes in wine and tapas. Try the gambas al ajillo and the huevos “cabreaos”. Due to it’s central location and popularity the restaurant is often packed.

Bar del Pla is set on the same historic street as the Museu Picasso. The restaurant serves traditional cuisine using fresh seasonal products. Their tapas include anchovies from “L’Escala” and crispy oxtail with foie gras. The restaurant has four sommeliers who love natural and biodynamic wines and enjoy making selections from all over the world.

Opened in 1992, Casa de Tapes Cañota is owned by the Iglesias brothers. The brothers are also famous in Barcelona for their restaurant Rías de Galicia (one of the best Galician restaurants in the city) and for their partnership with the Adrià brothers in Tickets Bar. The Casa de Tapes Cañota menu is based on classic tapas along with traditional Galician dishes. Try the Gambeta de Palamós and the Musclos Gallecs al vi blanc.

El Quimet d’Horta was founded in 1927 and is situated in the Horta neighborhood. It is famous for the 85 varieties of sandwiches using ciabatta (xapata) bread. The atmosphere is family-oriented, charming and Quimet’s collection of thousands of mini bottles create a very special atmosphere. Among their delicious tapas try the croquetes, mussels and anchovies.

Which are the most popular tapas dishes in Barcelona?

Bombas, Pimientos De Padron, Croquetas and Pa Amb Tomaquet are classics that you will find on almost every menu.