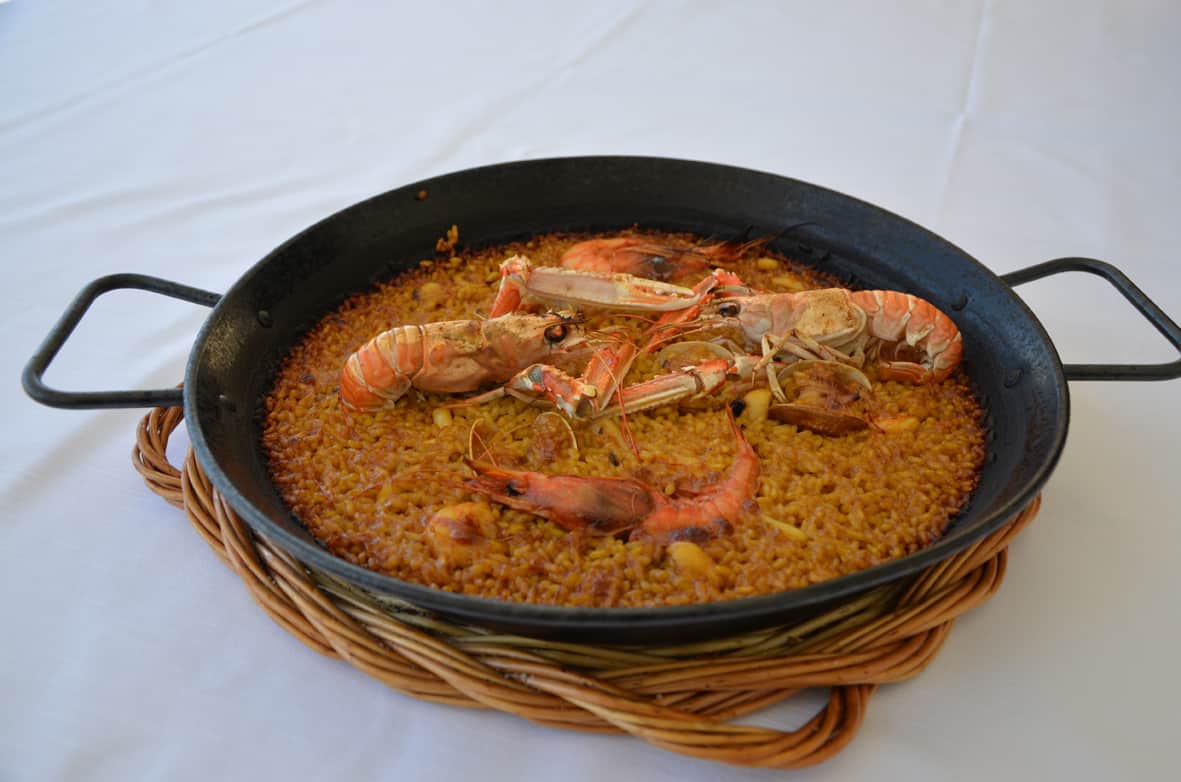 While paella traces it’s origins to Valencia, the dish can be found all around the Spanish Mediterranean, with each region having a unique variation.

Paella means pan in the old Valencian language and the word is likely derived from the Latin word for pan; patella. The first paellas were made by farmers in Valencia using rice and available local ingredients such as rabbit to cook lunch in a pan over a wood fire.

The emblematic 7 Portes Restaurant in El Born has a rich history reaching back to the 19th century. Josep Xifré i Casas (1777-1856) was an ‘Indiano’, a weathly Catalan businessman who made his fortune in Cuba.  He built the Porxos d’en Xifré building taking a hand in the design himself, inspired by the Rue Rivoli of Paris. Making his home and office in the new building, he also chose to include a luxurious cafe on the site. The cafe opened in 1836 and had seven doors through which the public could enter.

In 1929, 7 Portes was turned into a restaurant. Paco Parellada, owner of the famous Fonda Europa in Granollers, took over the restaurant in the early 1940’s. At that time 7 Portes began serving the famous Paella Parellada, which has since become the specialty of the house. A long time favorite of politicians, journalists, writers and artists, famous 7 Portes patrons have included Alexander Flemming, Orson Welles and Pablo Picasso.

Restaurant Elche is located off the beaten tourist track, in the neighborhood of Poble Sec. Andrés Iborra and Carmen Vicente opened “El Elche” in 1959, the restaurant named after the couple’s hometown in the province of Alicante. The bar and restaurant soon attracted many artists and celebrities in show business along with the patrons of the nearby theatres on the Avinguda del Paral·lel. Later, their sons Eduardo and Andrés took over the restaurant, maintaining a rich family tradition.

The family run Can Majó was founded in 1968, a time when Barceloneta was still a fishing village. Specialties of the house include caldero de arroz con bogavante (cauldron of lobster with rice) and appetizers such as chipirones a la Andaluza (Andalusian style baby squid).

Opened in 1903, Can Solé is situated in a two-floor house in the heart of Barceloneta. The restaurant offers classic paella dishes and accomodates groups, families and the occasional celebrity.

Restaurant Barceloneta, established in 1966, offers Catalan-Mediterranean cuisine with views over Port Vell. Sea snails are a popular appetizer along with the classic paella dishes on offer.

Roig Robí means ruby red in Catalan; a reference to the color of certain wines. Based in lower Gràcia just above Diagonal, the restaurant is a short walk from the majestic Hotel Casa Fuster. Known for its excellent rice and cod dishes, Roig Robí’s traditional Catalan cuisine is served in a charming setting including a terrace and ratan chairs.

Barceloneta’s Can Ros Restaurant started out as a wine cellar in 1911 before becoming a restaurant in the 1950’s. It is still run by the 5th generation descendants of the founders Ramon Cid and Carme Blanch.

Martinez is perched on Montjuic, away from the hustle and bustle of the city. Here you can enjoy sweeping views of the sea along with some of the best rice dishes in town. Martinez prides itself on its Socarrat rice, the caramelized crust that sticks to the bottom of the paella pan.

Tucked away in the heart of Barceloneta, Restaurante Cheriff has a neighborhood feel while serving paellas of legendary repute. The restaurant is named after its founder and the family run business has been passed along to Cheriff’s daughter and son-in-law. 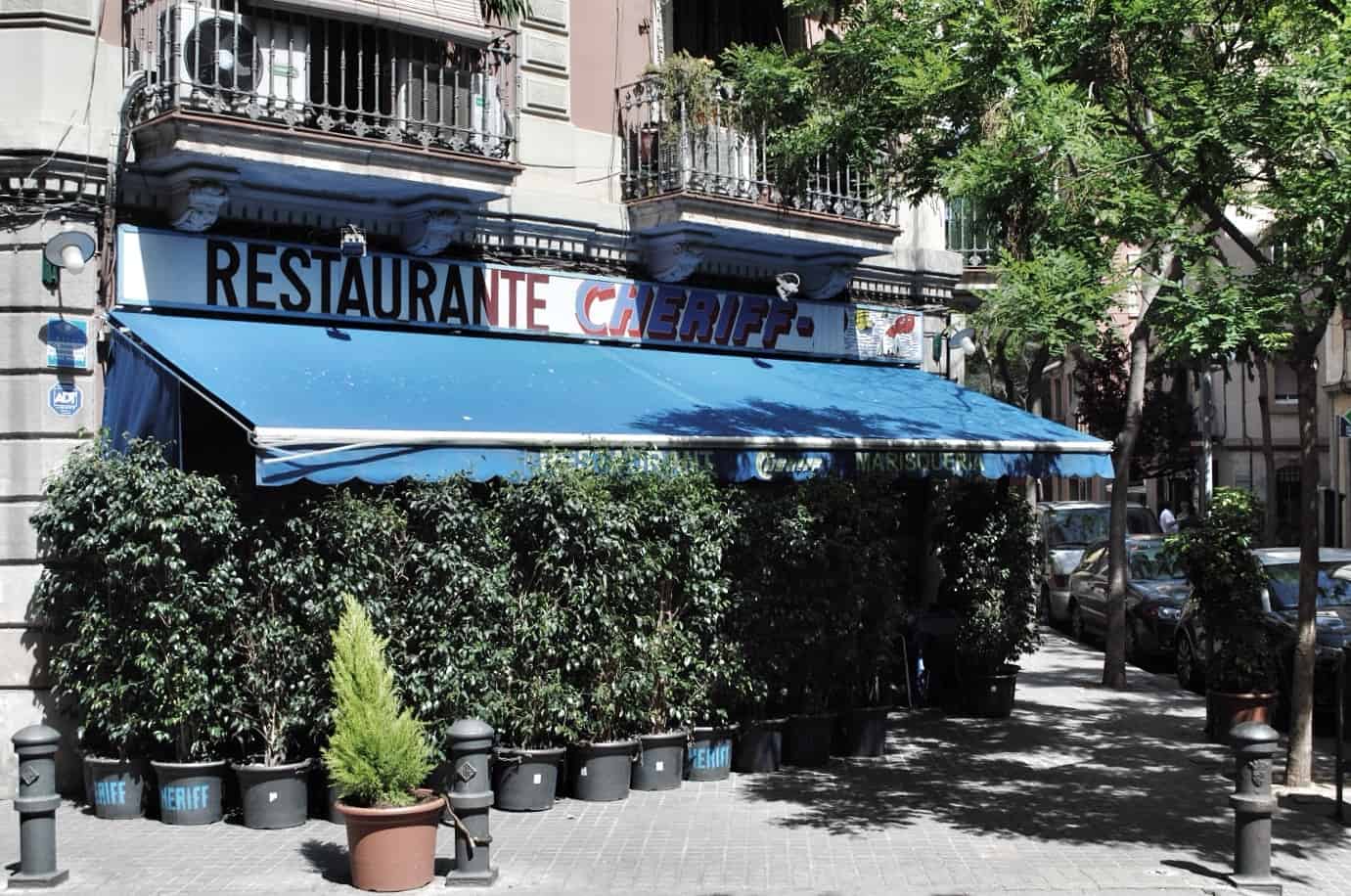 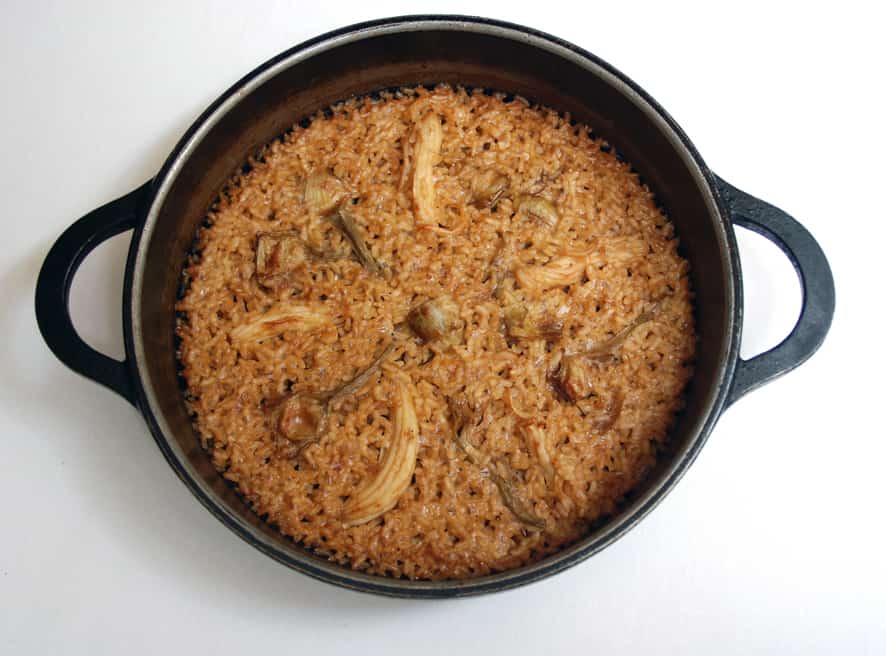 What are the ingredients of paella?

The ingredients are typically rice (short- or medium-grain), sofrito (a base of green or red peppers, onions, garlic, olive oil, and tomatoes), broth (using chicken or fish stock), herbs and spices (saffron, paprika, and rosemary), seafood, meat or vegetables.

Can paella be made without seafood?

Yes, paellas are sometimes made with chicken. Vegetable only paellas are also common. The original Paella Valenciana used chicken, rabbit and snails with green and white beans.

What are the origins of paella?

Paella comes from Valencia and the rice-growing land on Spain’s Mediterranean coast. Rice was first brought to Spain by the Moors in the 10th century. Paella was originally eaten by farmers and laborers. It was cooked outside over a wood fire using local ingredients that they had available.