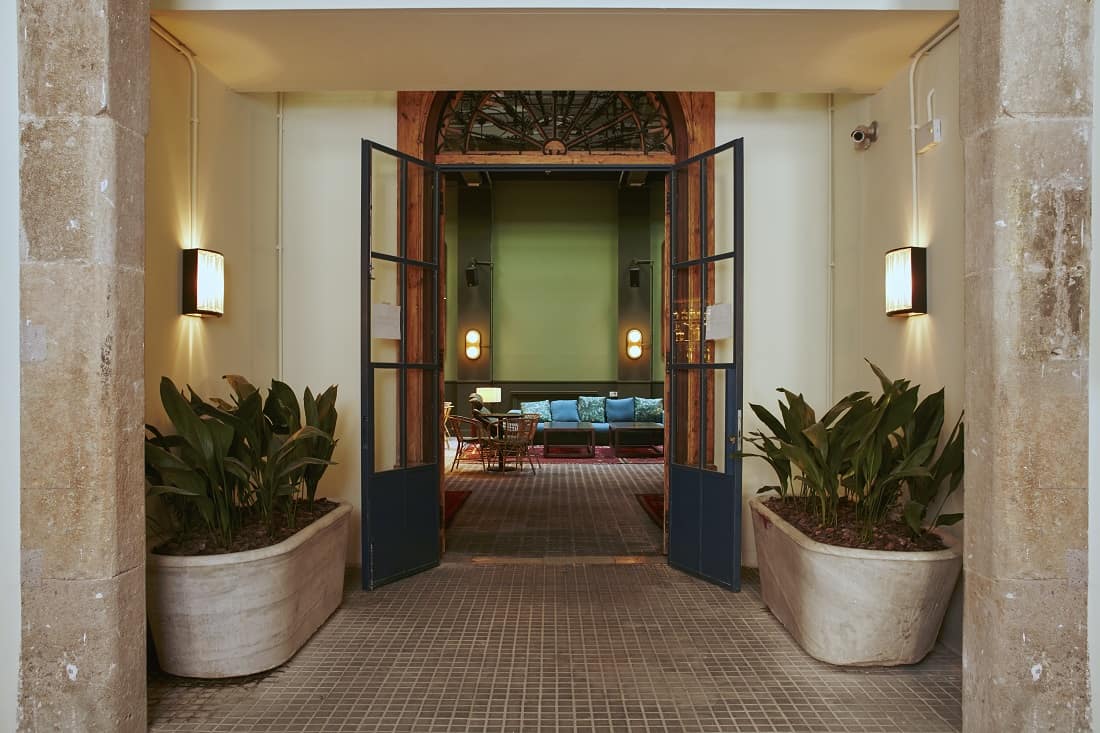 Opened in early 2016, Casa Bonay is a collaborative boutique hotel in Barcelona’s Eixample neighborhood. The hotel has 67-rooms and occupies the restored 19th century mansion of the Bonay family, built in 1869. The building has been revitalized while maintaining original features to create an energetic, creative hub. Casa Bonay co-founder Inés Miro-Sans worked closely with Brooklyn-based design firm Studio Tack to highlight design elements such as original mosaic floors and a large naturally-illuminated corridor that fills interior rooms with sunlight. Casa Bonay is collaborative in that the founders have sought out emerging and established local talent, to define a new creative collective approach to hospitality in the city.

Bedrooms feature contemporary furnishings from local designers and custom textiles with accents of green and blue to compliment the original mosaic flooring and natural light from the rooms’ windows, balconies and terraces. Rooms are also equipped with a minibar with locally-sourced products and vegan snacks from Mother. Guests that don’t want to use air conditioning can use ceiling fans instead. Bathrooms have products from Las Lilas and a Yoga kit is available in select rooms.

Natural light flooding in from the bedroom terrace.

Blackie Books, a Barcelona-based independent publishing house, has a bijou library, magazine stand and bookshop situated in the entrance hall at Casa Bonay, stocked with fiction, illustration, magazines and poetry.

The restaurant in Casa Bonay is led by chef Estanislao Carenzo, formerly a biologist, who experiments with flavours, textures and aromas to create exciting dishes using ingredients from local producers and gourmet artisans. The menu is comprised of small plates in homage to the tapas tradition and is complemented by a wide selection of natural wines, rare sherries and natural ciders.

In the Libertine, guests can taste a selection of fine teas from Casa Bonay’s Shanghai tea master. For those ready for a drink, the bar offers an innovative cocktail menu of over 20 signature drinks. Chef Estanislao Carenza’s interpretation of comfort food classics from around the world can also be enjoyed in the space.

Gemma Ponsa Salvador and Lily Figel are champions of the art of cold-pressed juice blending in Barcelona, having brought cold-pressed juices to the city with their brand and cafe, Mother. Their juices and smoothies are made exclusively from local and seasonal fresh and dried fruit and, at Casa Bonay, will include some ingredients grown on the hotel’s own rooftop garden.

Marcos Bartolomé comes from a family of coffee roasters and brought high quality coffee and his meticulous coffee-making method to Barcelona, starting from a hole-in-the-wall outpost before expanding to open his own cafe in the Gothic Quarter last year. Satan’s Coffee Corner has fast become a cult classic for coffee fanatics and he now makes his second home at Casa Bonay. The link below leads to our affiliate, Booking.com.