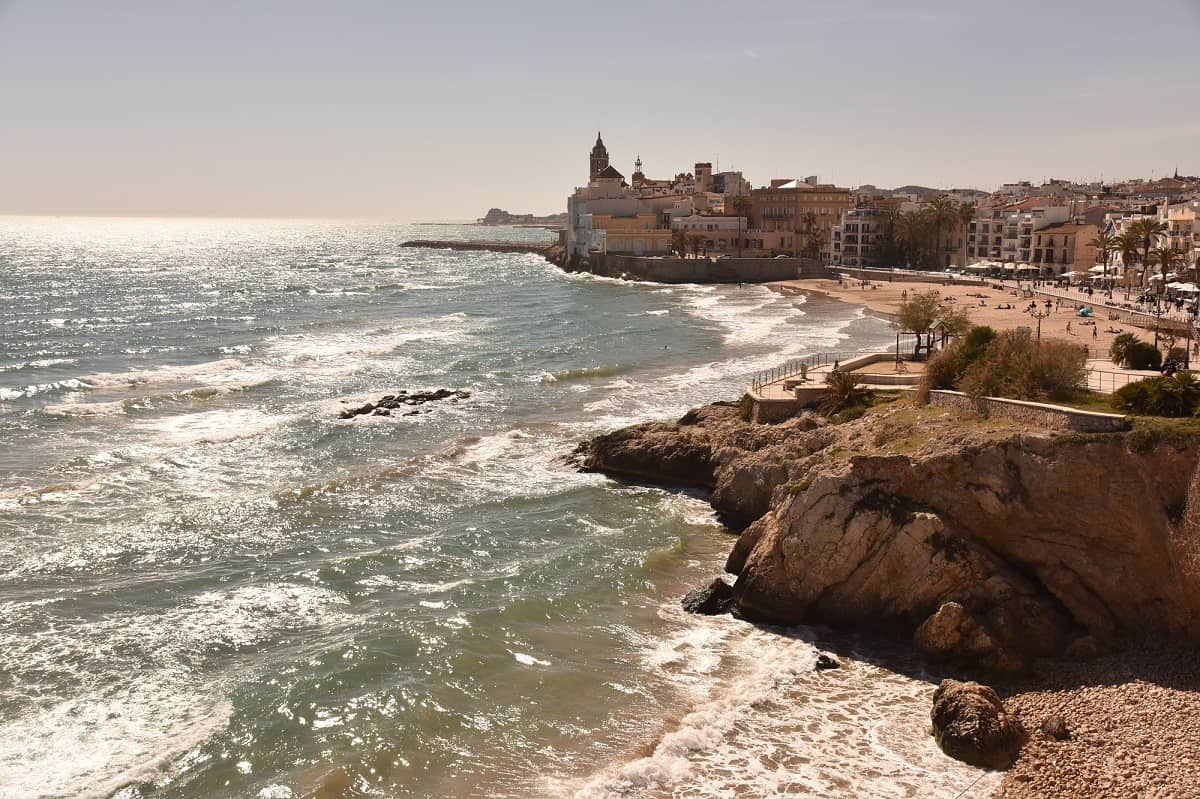 The seaside town of Sitges lies roughly 35km southwest of Barcelona, in the Garraf comarca. It is one of the most popular destinations for day trips from Barcelona, and makes a great escape from the hustle and bustle of the city.

The dramatic seaside stairs lead up to the 17th-century Església de Sant Bartomeu i Santa Tecla, the most famous landmark of Sitges.

Above: Carrer de Parellades, leading to Plaça del Cap de la Vila. The plaça is marked by the Casa Bartomeu Carbonell, also called Casa del Rellotge (clock house) and makes a perfect meeting point. Sitges is sometimes referred to as the St. Tropez of Spain for it’s glamor and luxurious villas. It is also called Ibiza in miniature for it’s famous party scene.

The Museu de Maricel, Palau de Maricel and Museu del Cau Ferrat are clustered together in the historic center of Sitges.

The port of Sitges, called the Puerto d’Aiguadolç, is home to many seaside restaurants and a popular place to enjoy a paella on a Sunday afternoon. The port is just a ten minute walk from the town center.

Whitewashed houses in the center of Sitges, that were once owned by fishermen.

El Chiringuito on the Passeig Maritim dates back to 1913. It is the original chiringuito and now beachside bars all along the coast of Spain are called chiringuitos. The name originates from Cuba in the 19th century. Plantation workers taking a break would drink a coffee called a chiringo and the shack where they drank it became known as a chiringuito.

Above: Bacardi Sculpture by the Italian sculptor Lorenzo Quinn. Don Facundo Bacardí Masso was born in Sitges in 1814 and moved to Santiago, Cuba at the age of 16. He founded the Bacardi rum distillery in 1862, with the idea of creating a premium Cuban rum. Bacardi is now one of the largest privately held, family-owned spirits companies in the world.

Above: A replica of one of six 18th century cannons that defended Sitges. The town traces its origins as far back as the 4th century BC, when it was an Iberian settlement called Blanca Subur.

In the middle ages Miralpeix Castle was built where the town hall currently stands. In the 16th and 17th centuries the population grew as people came from France and the town recovered from the wars and pandemics of the 14th and 15th centuries. During this time the economic activity of Sitges revolved around fishing.

In the 18th century restrictions were lifted, allowing free trade with the Americas. Many people from Sitges came back from places like Cuba with new found wealth and used it to build mansions. In 1891, the painter, poet, playwright and journalist Santiago Rusiñol moved to Sitges and the town became a part of the Catalan modernisme movement.

In 1909, an American businessman, art collector, and philanthropist named Charles Deering funded the construction of the Palau de Maricel. In 1916, Hotel Subur, the first major hotel of Sitges opened its doors. It was followed in 1933 by Hotel Terramar.

In 1968 the Sitges Film Festival took place for the first time. The event aimed to attract more tourism to Sitges and has since become the world’s top fantasy film festival. In 1975, the Port d’Aiguadolç began operations. It is now one of the largest marinas in the Mediterranean, with 742 moorings.

Sitges is home to two museums that are declared sites of National Interest: Cau Ferrat and the Maricel Museum. Also worth visiting are the Palau de Maricel, Fundació Stämpfli and the Museu Romàntic.

Sitges has a lively calendar of festivals throughout the year. The famous Carnival takes place in late February. During June’s Corpus Christi festival, the streets of Sitges are covered in artwork made from flower petals. The festival of Santa Tecla is celebrated in September, to mark the end of summer.

In October, lovers of horror and fantasy films gather for the Sitges Film Festival. Over a thousand people dress up as zombies for the famous Sitges Zombie Walk which takes place during the event.

Sitges has a unique microclimate and 310 days of sunshine per year. The Garraf Massif mountain range plays a part in keeping bad weather at bay.

There is a special quality of light in Sitges. The tile above talks about how the painter Santiago Rusiñol was captivated by it.

It was love at first sight. Rusiñol, like Roig i Soler, and like Mas i Fontdelvila had fallen in love with the light of Sitges. And something that fit perfectly with his romantic temperament, with the depth of sadness that hid under the laughter, he also falls in love with our patios, with the ‘blue patio’.

El Cable, dating back to 1940, is a Sitges classic. Now run by the third generation of the founding Andreu family, it is a favorite among locals. Popular tapas include their patatas bravas, croquetas and calamares a la romana.

La Zorra (arroz backwards) is famous for their beautiful and delicious paellas. Rice lovers can choose between vegan, paella with squid, zamburiñas and salmorejo, paella Valenciana, black rice with mussels and poached egg and more. Situated just across the street from the beach on Passeig Marítim.

Can Laury is a Mediterranean seafood restaurant, situated in a pretty spot overlooking the port. With a spacious seating area it makes a good choice for celebrations and large groups.

Moreno Major 17 offers Spanish tapas at its best. The croquettas and mussels a la marinara are outstanding.

Sitges also has some good vegetarian and vegan restaurants to choose from.

Veggie Garden Dishes are inspired by the cuisine of Nepal, the countries surrounding it and from European Mediterranean cuisine.

Sitges has two restaurants in the MICHELIN Guide Spain: Fragata and Maricel.

Sitges is packed with bars and nightclubs. The liveliest area is around Plaça de la Indústria, but bars and clubs are dotted all around town, even reaching out to Puerto d’Aiguadolç.

New Ricky’s, Carrer de Sant Pau, 25, is a favorite for dancing the night away. The club stays open until 6AM.

Mediterráneo, Sant Bonaventura 6, is a large nightclub in a 17th century house.

Queenz has two popular locations: a cabaret restaurant with a drag queen show and a bar and nightclub.

Skybar at Hotel MIM and Soi 33 are two of the best roof terraces in Sitges and great places to enjoy a cocktail at sunset.

Above: La Goulue Chocolatier. For a small town, Sitges has a good number of boutiques selling clothes and gifts. Many of the shops are on Carrer Major and Carrer de Sant Francesc. A good number of art galleries are also spread thoughout Sitges, such as Agora 3 Art Gallery and Art Gallery Estudi Vidal.

There are a number of online communities that can help orient you in Sitges. They are also good places to find events and meet likeminded people. 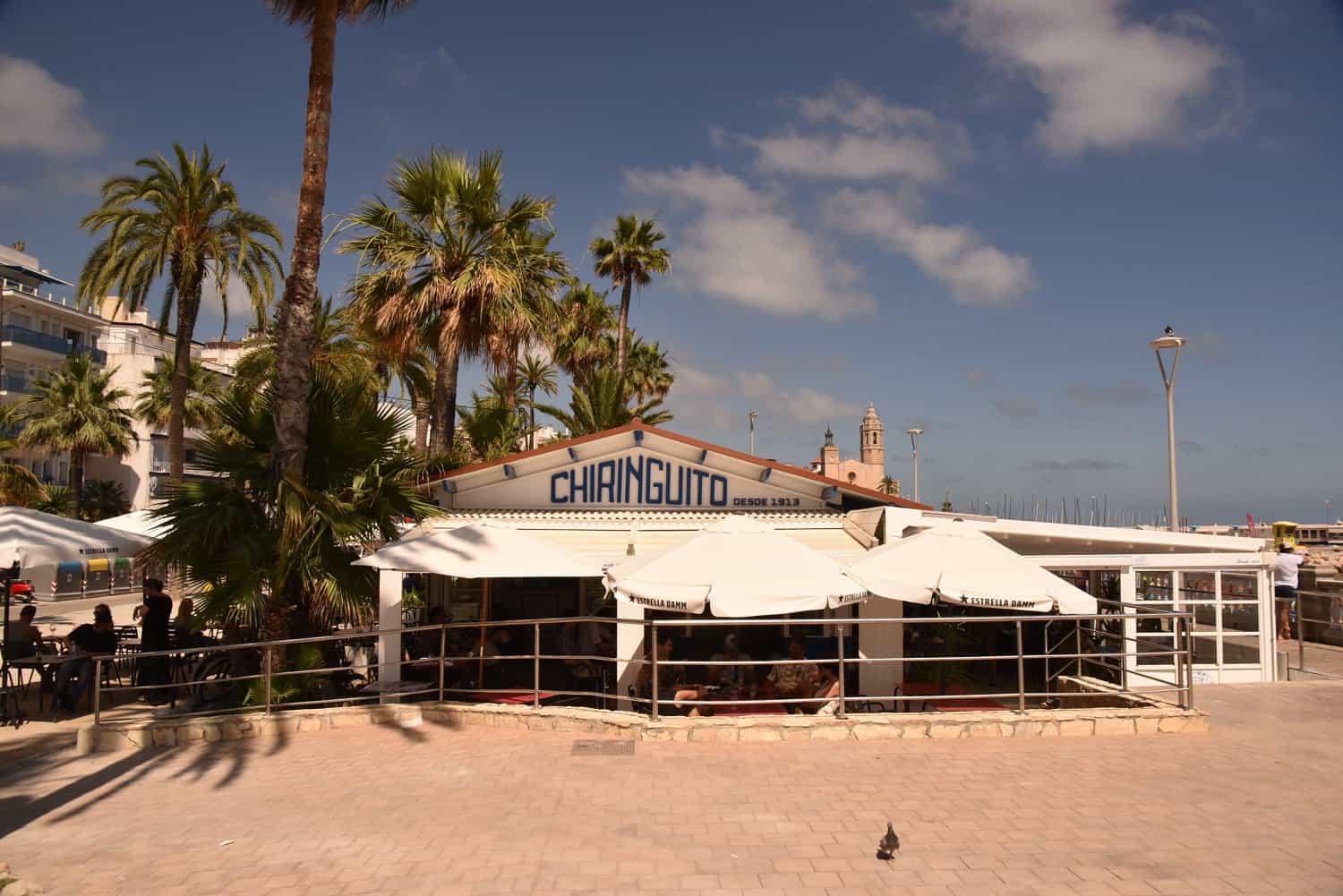 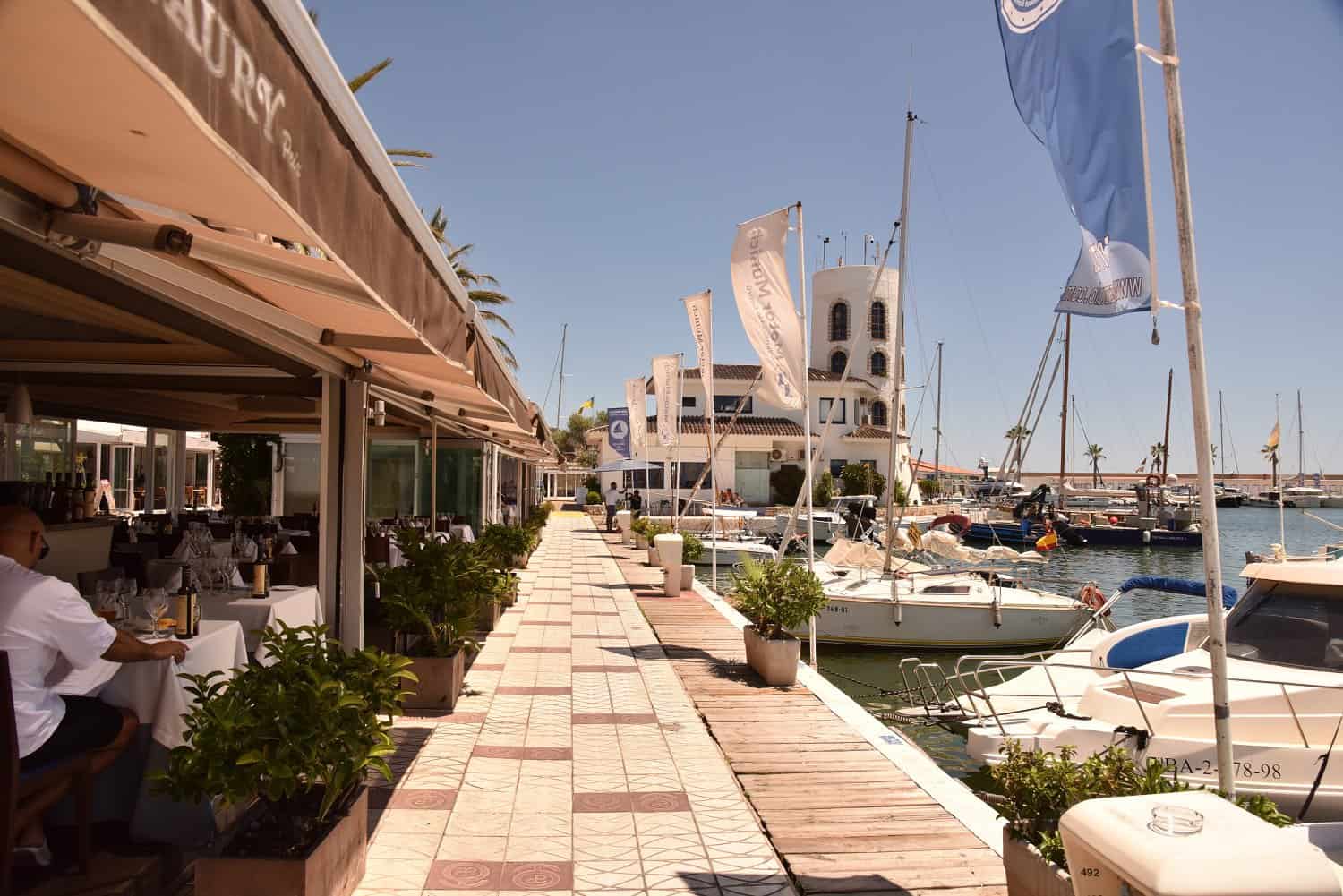 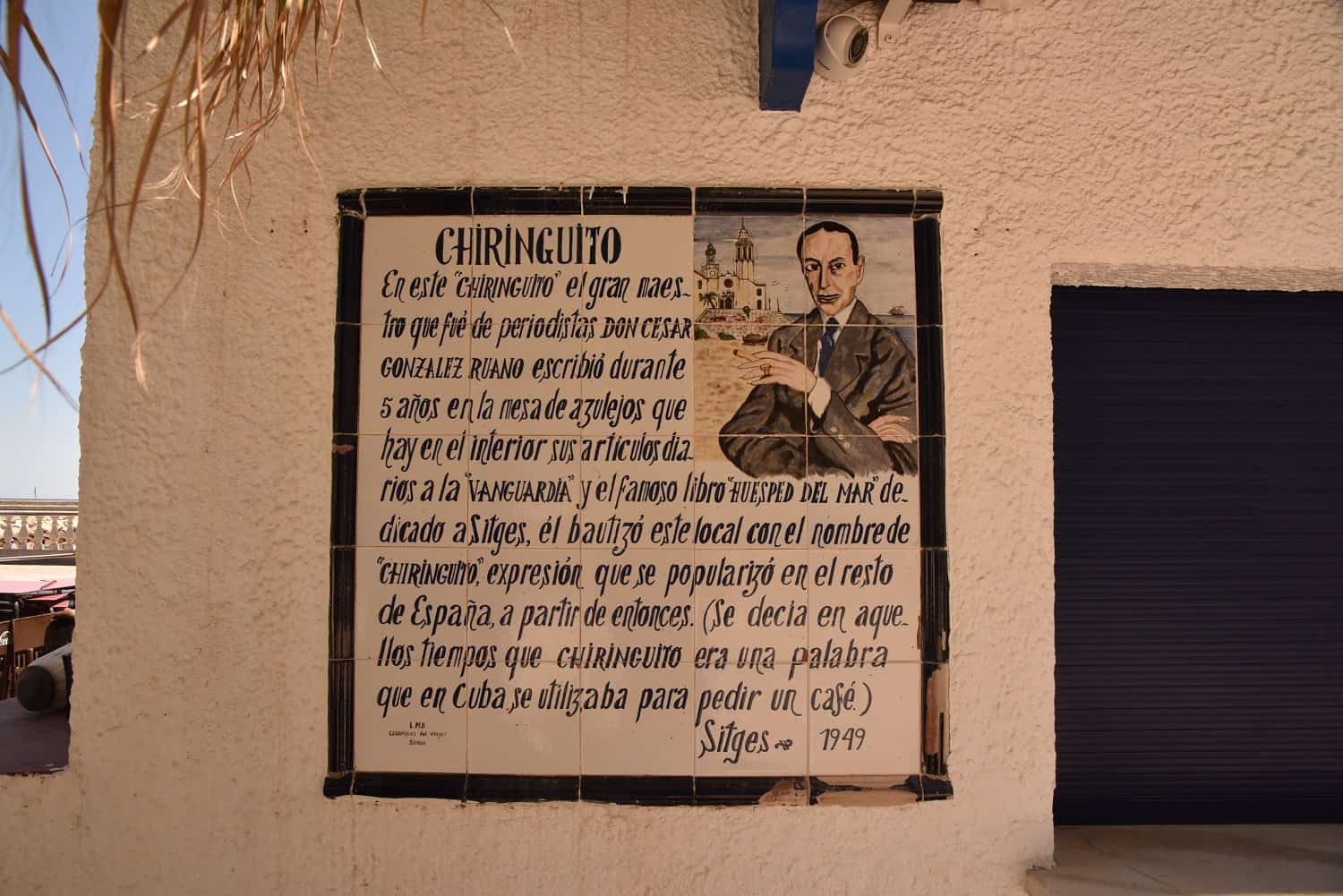 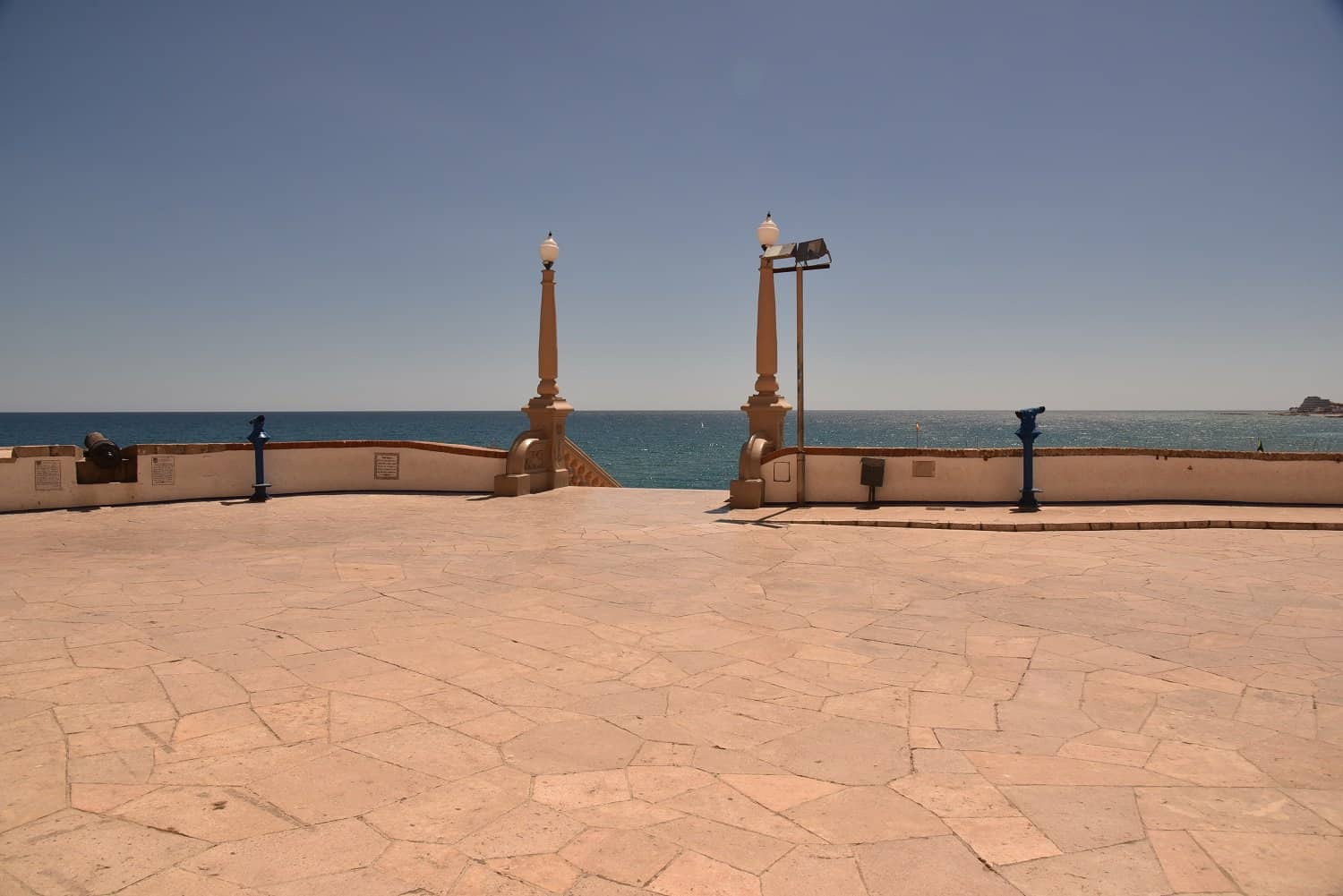 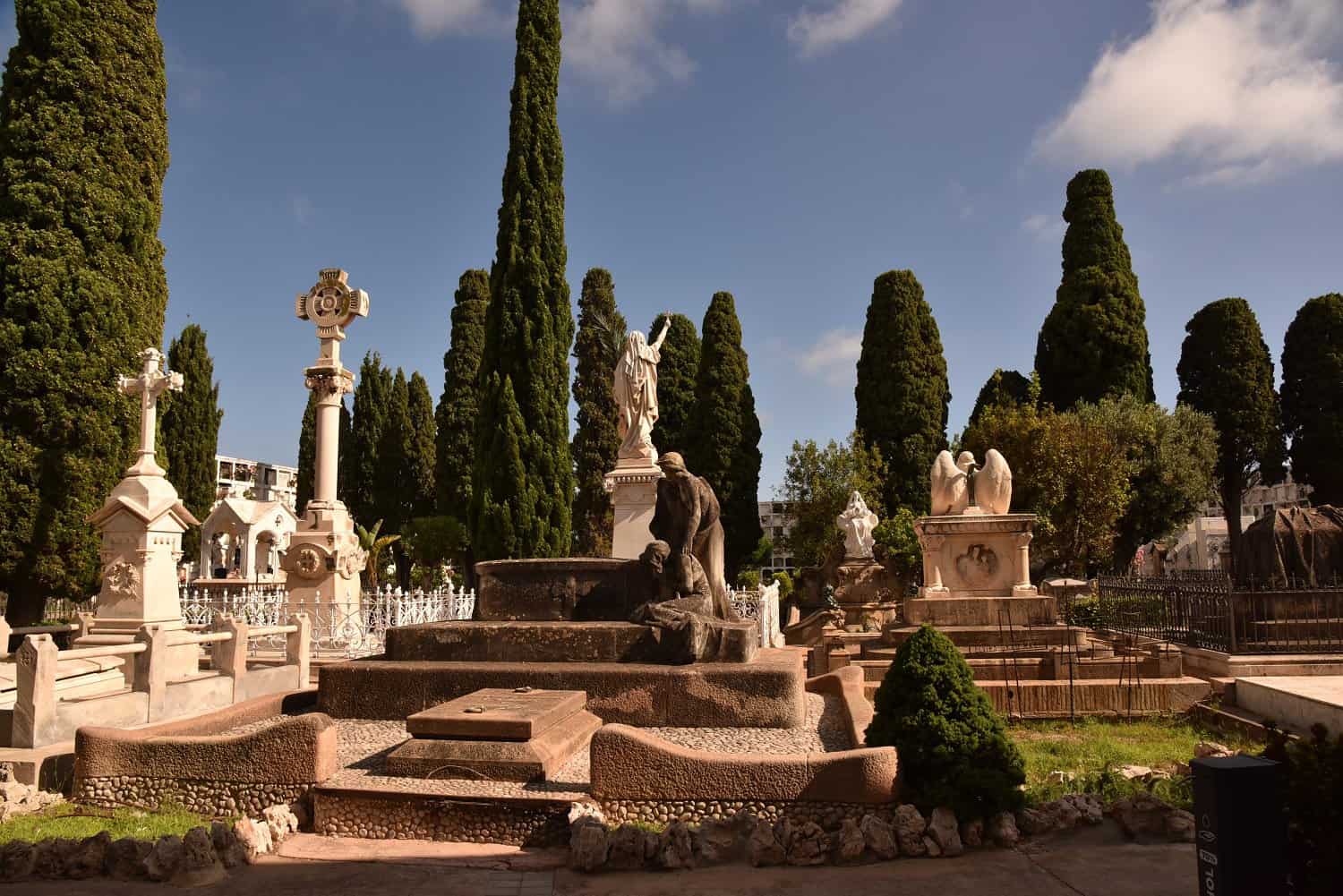 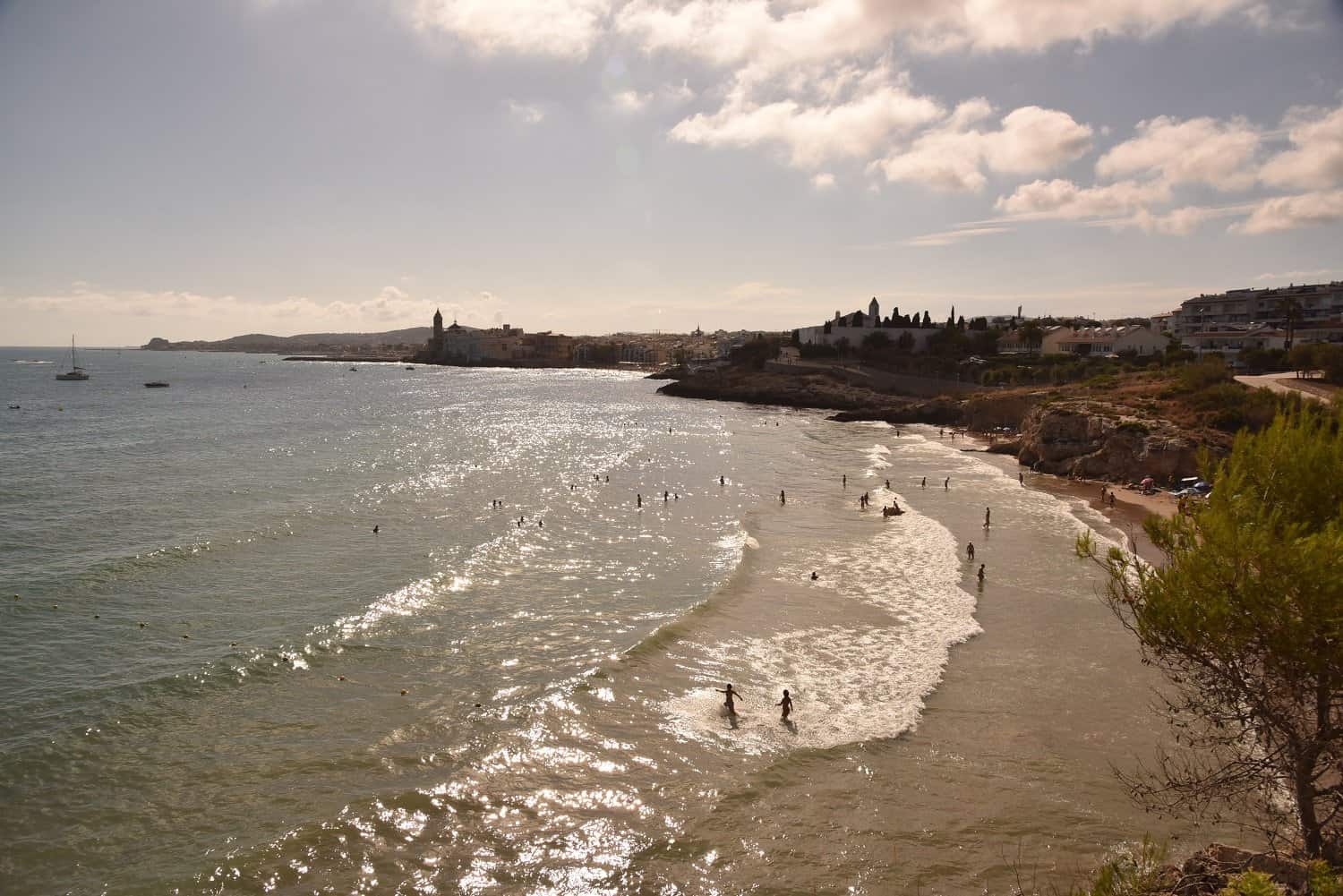 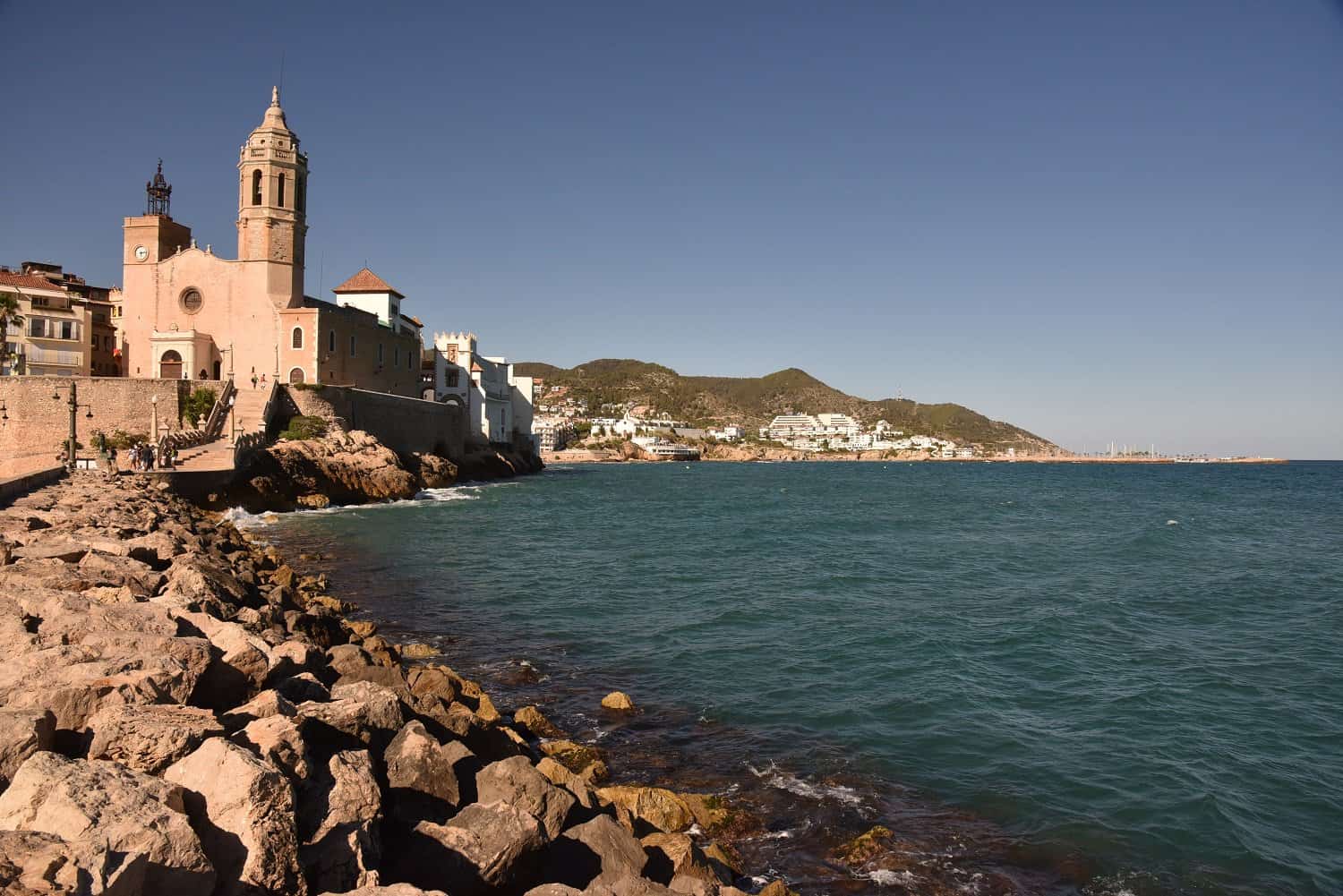 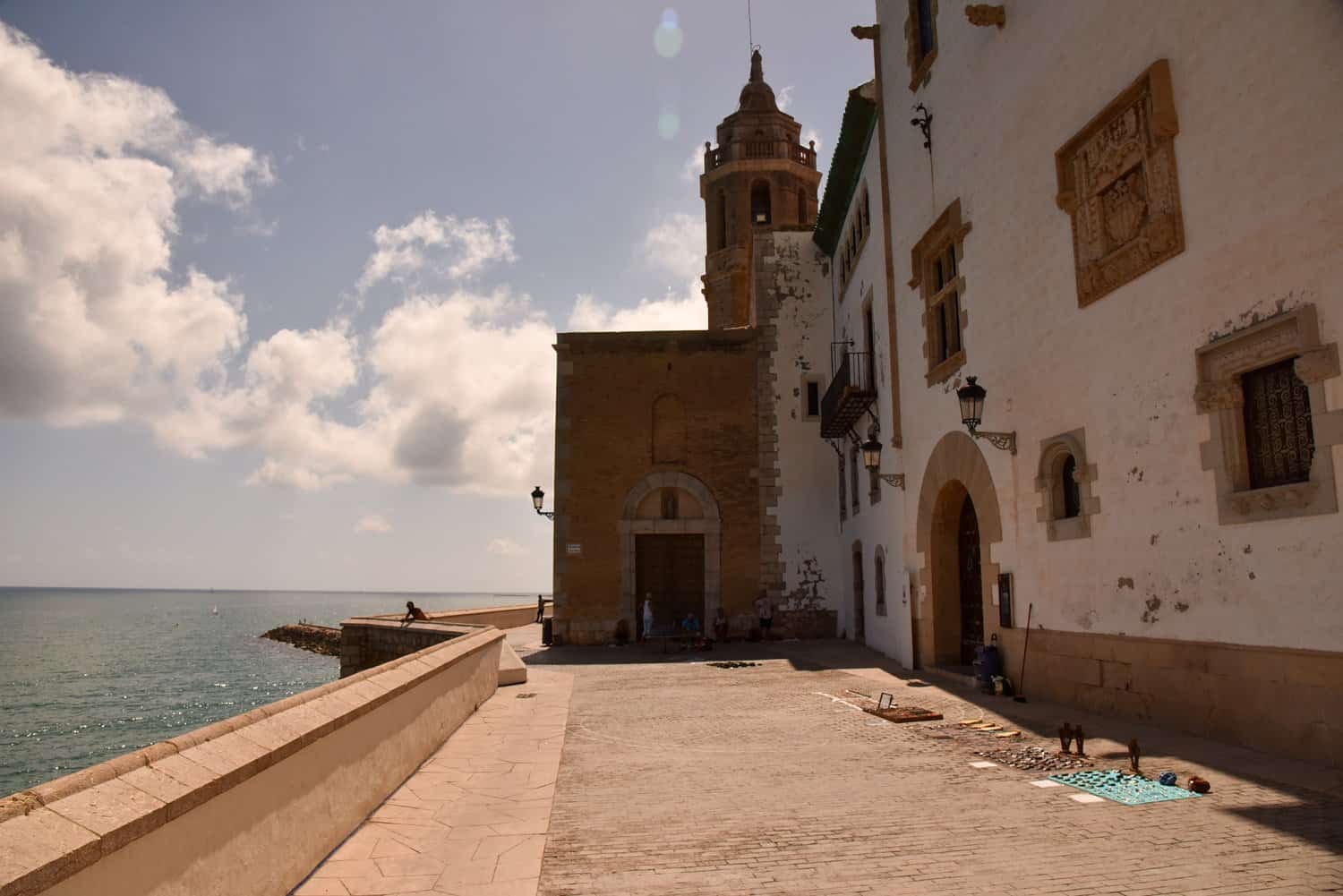 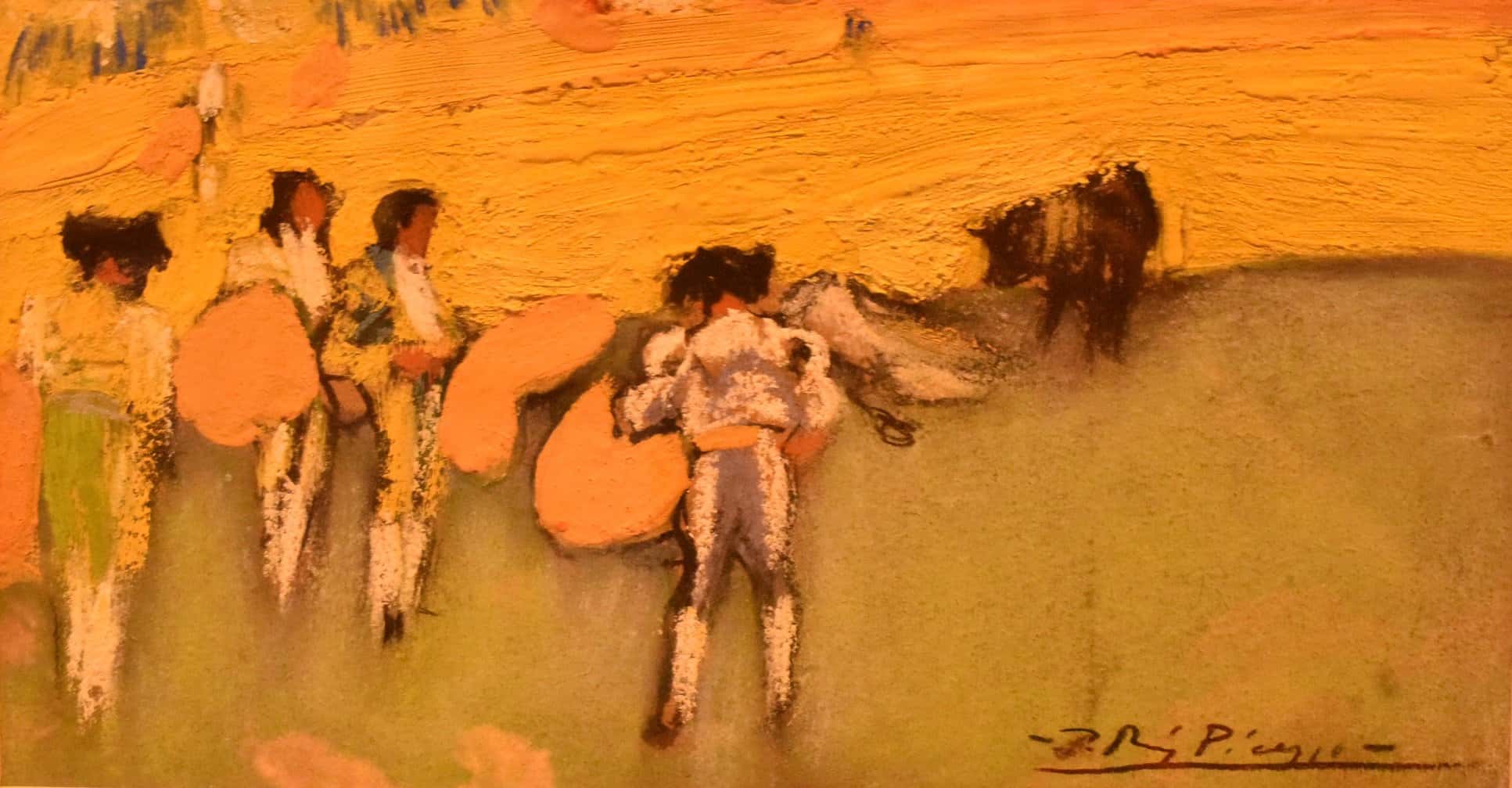 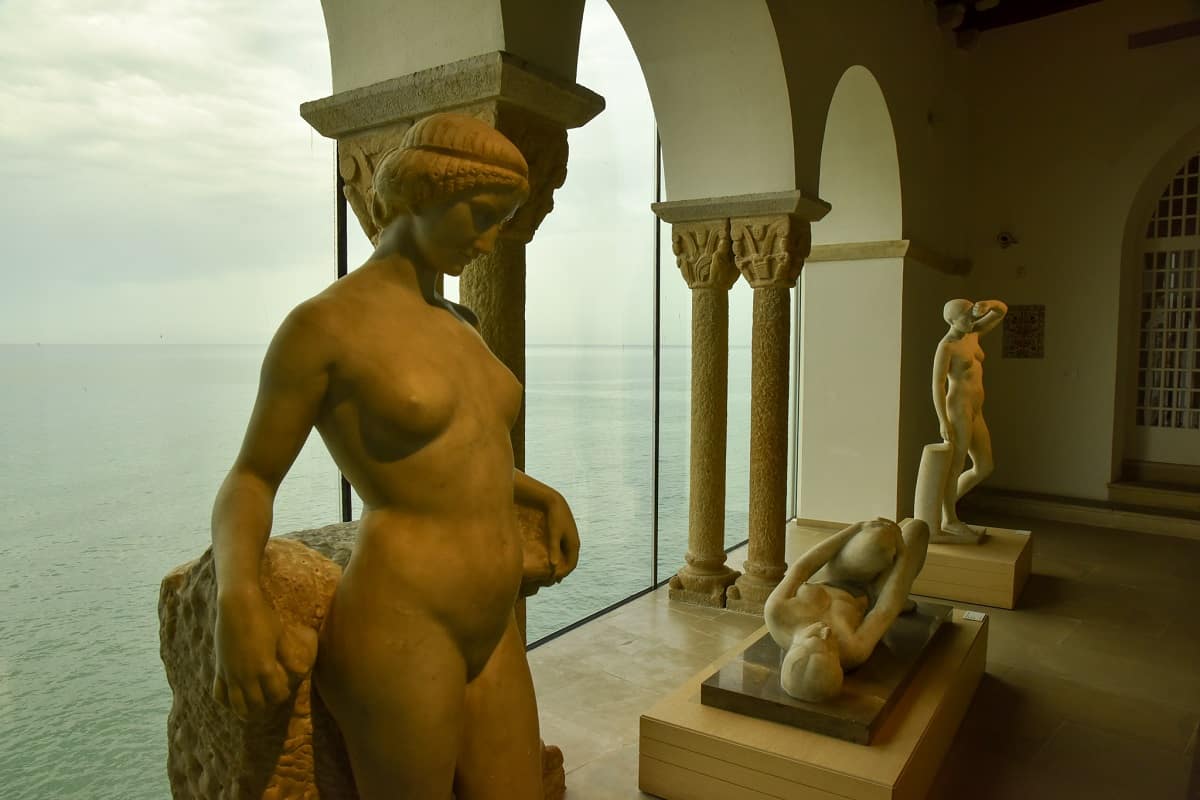 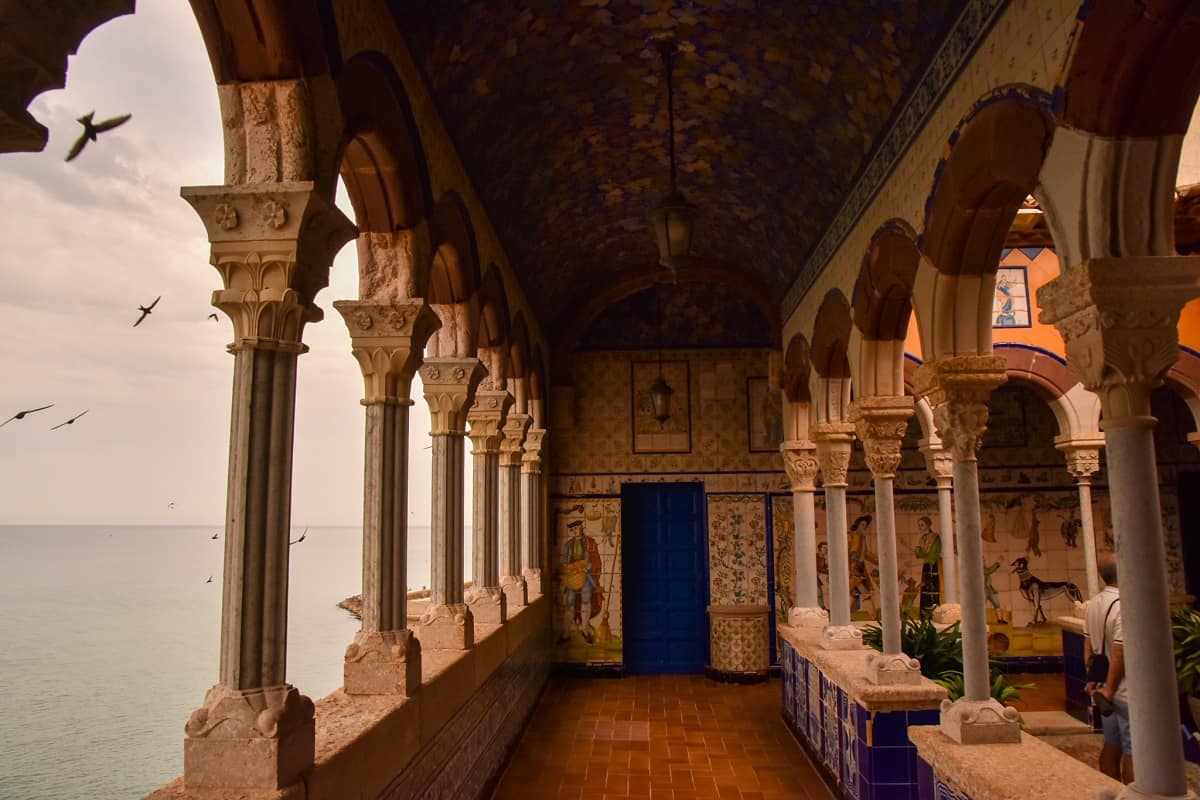 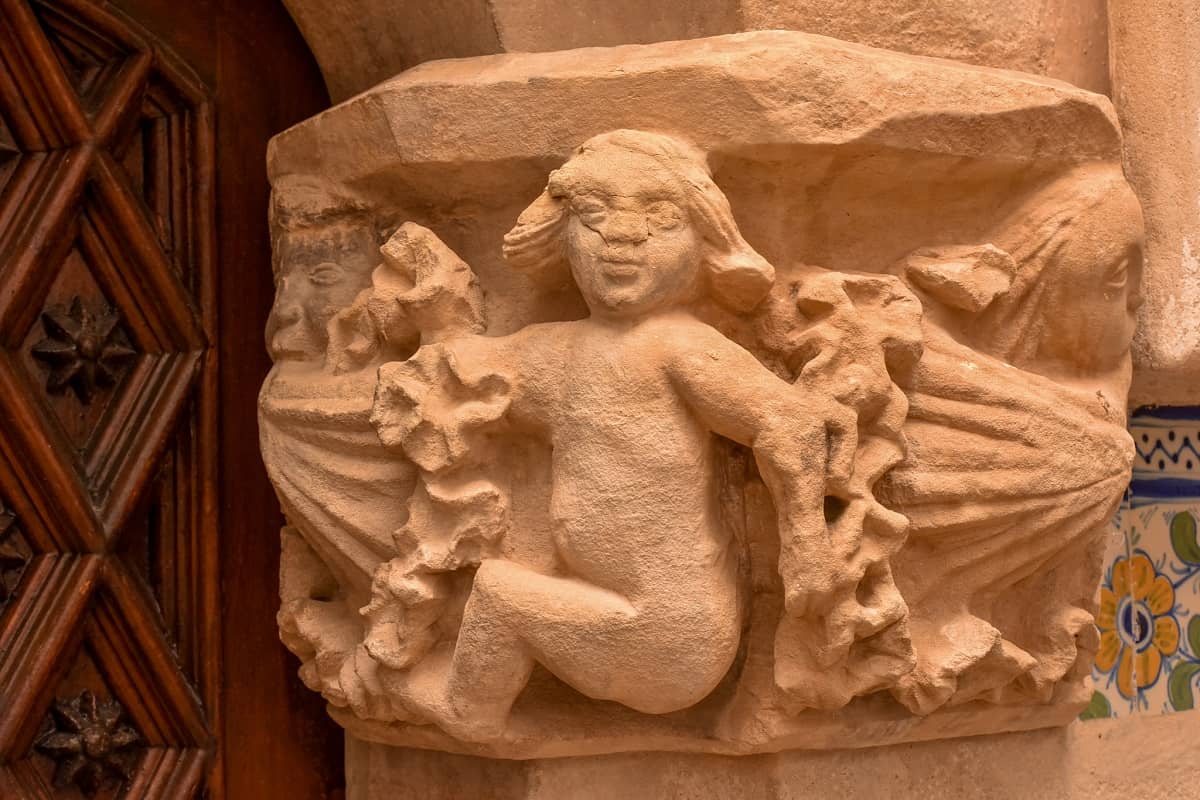 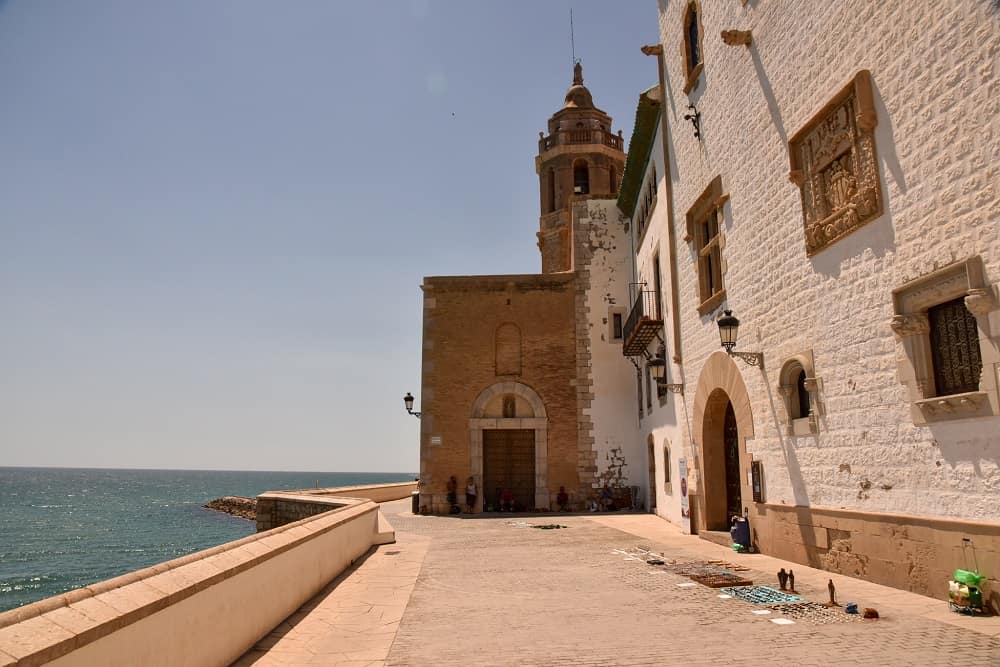 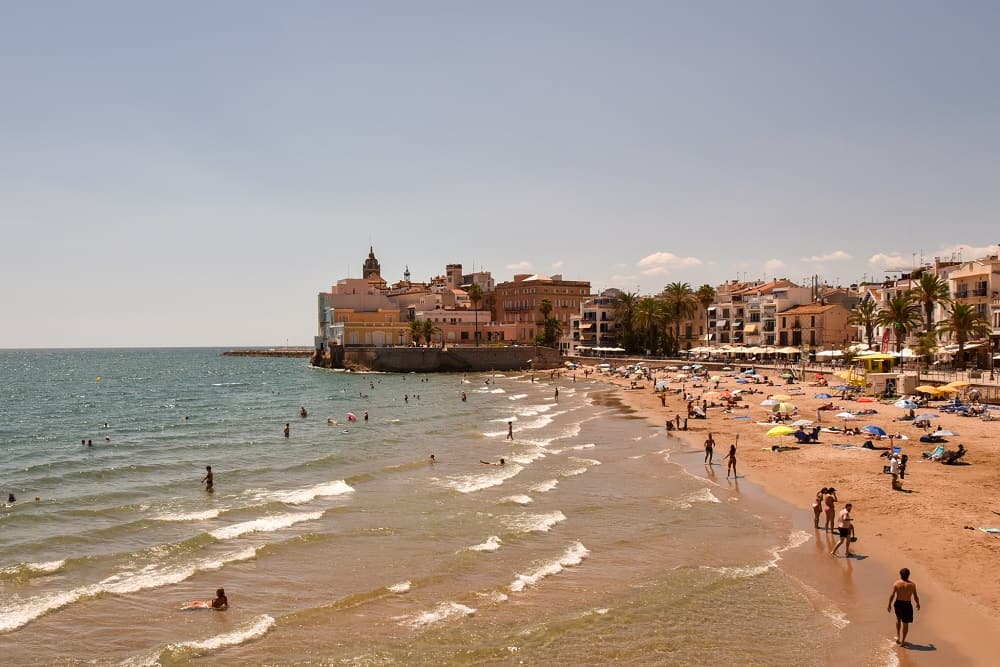 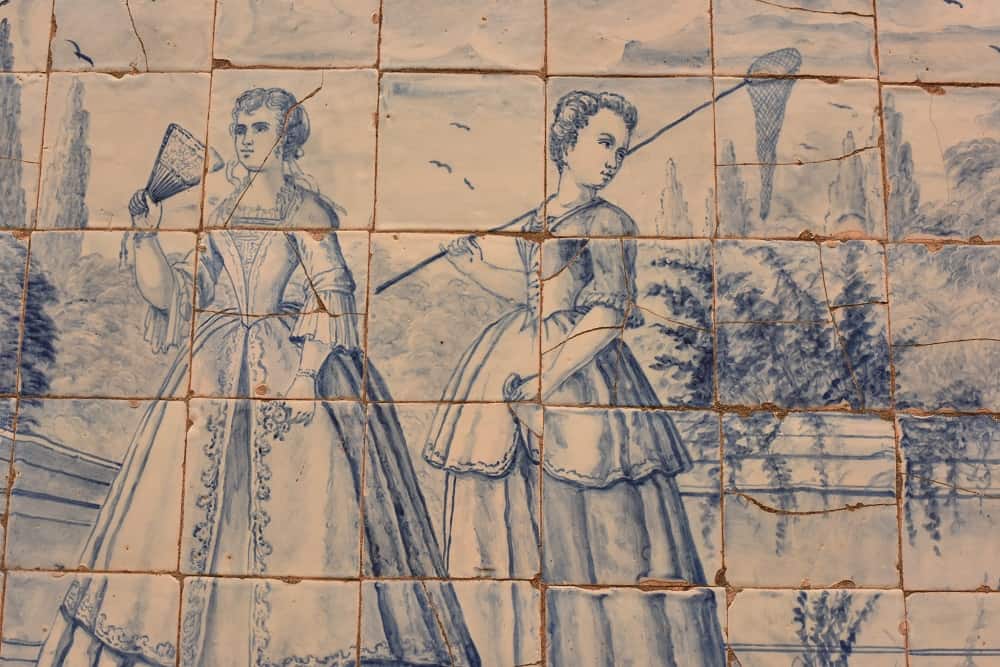 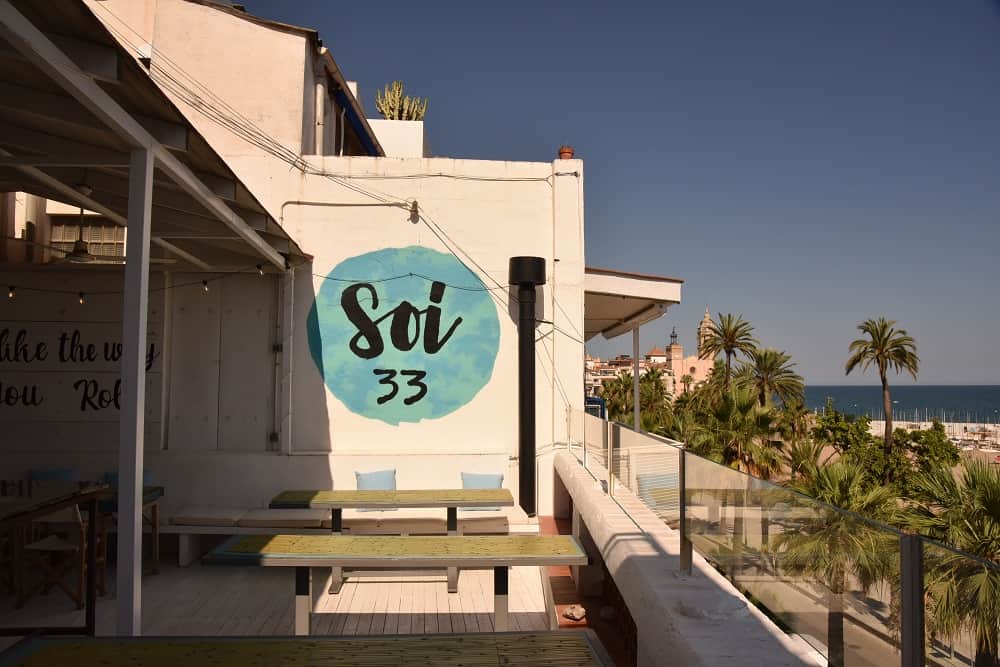 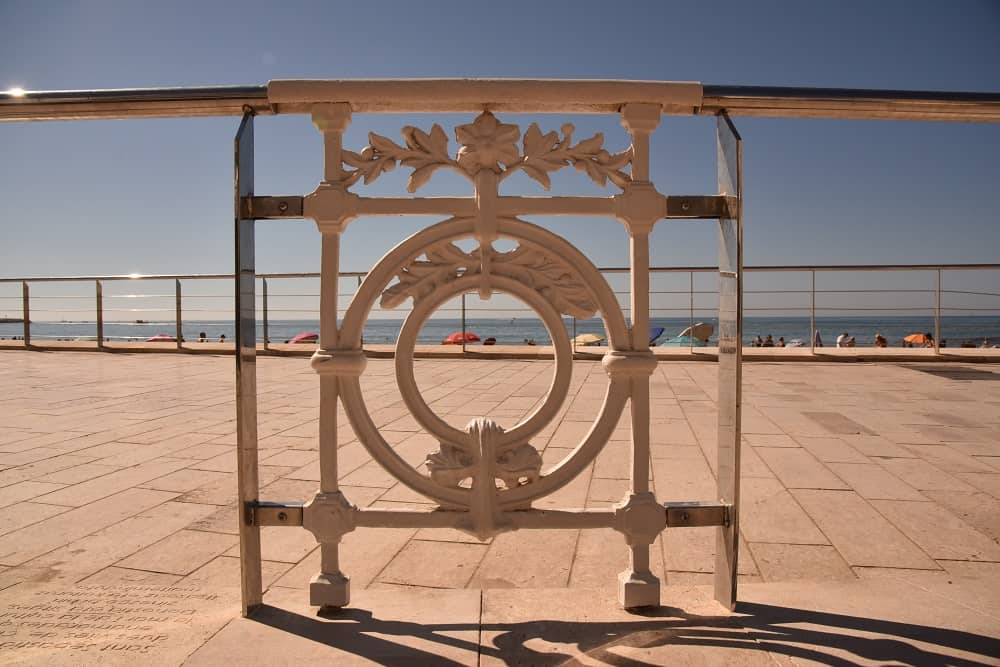 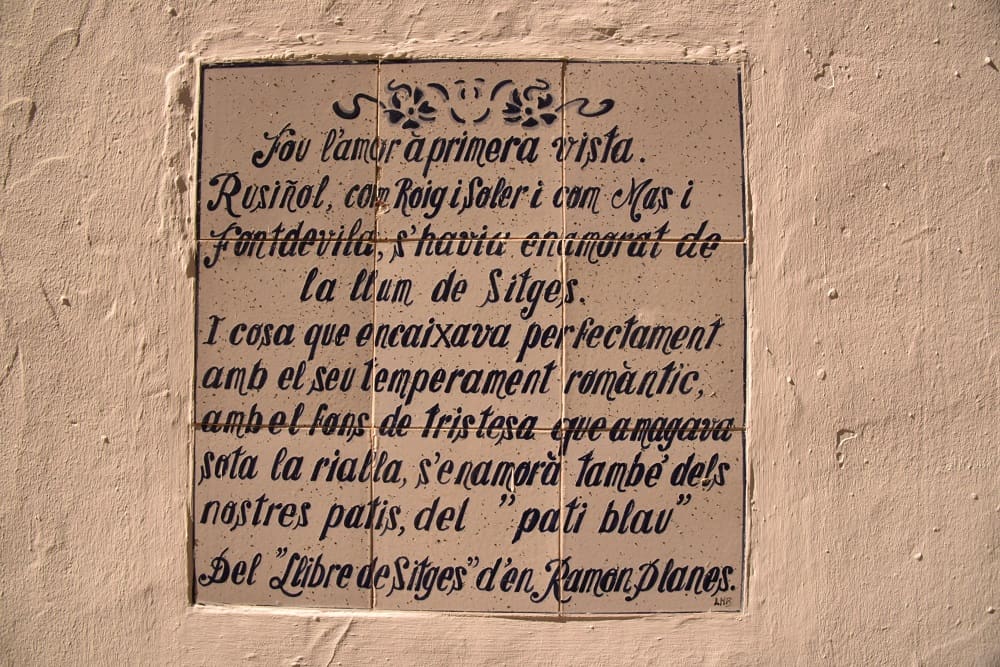 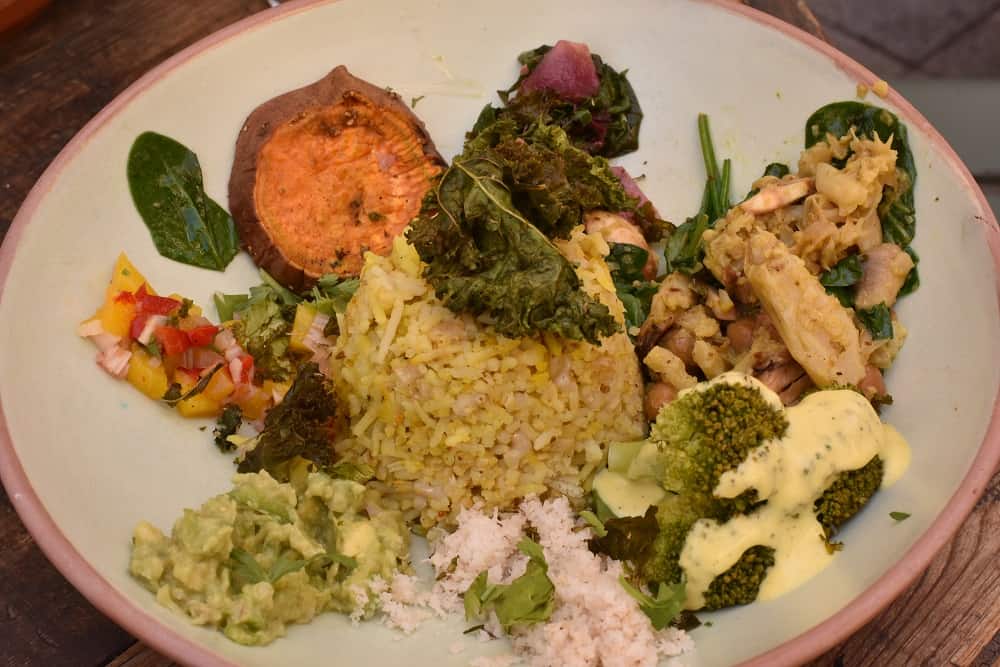 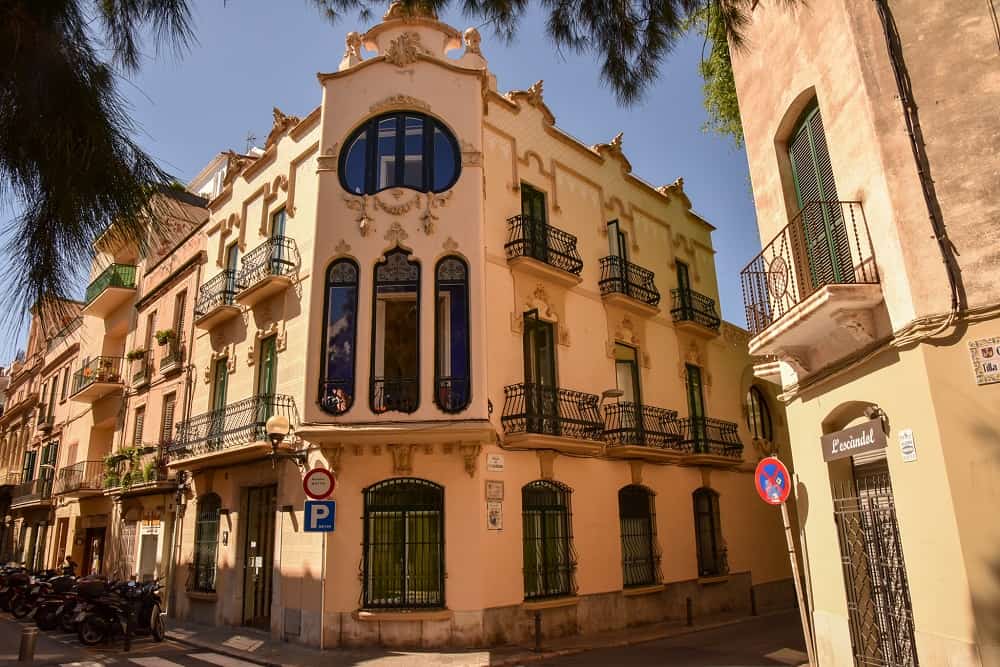 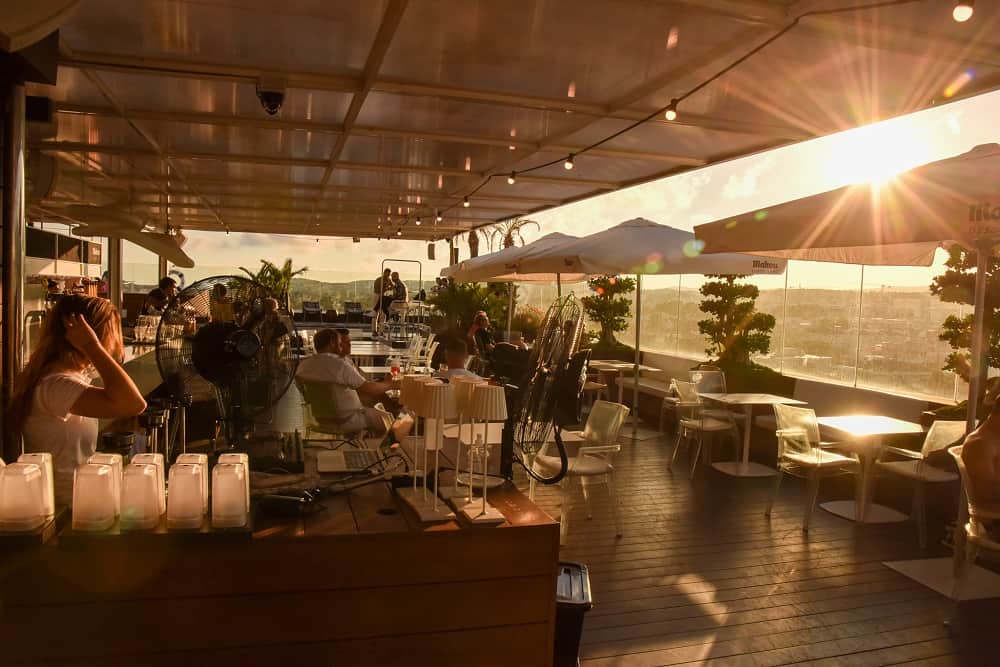 How do you pronounce Sitges?

What is Sitges known for?

Sitges is world famous for its Film Festival and Carnival.

Yes, Sitges is a safe town with a low crime rate.

How big is Sitges?

How can I get to Sitges from Barcelona?

You can get to Sitges is less than an hour on the Renfe R2 Sant Vicenç de Calders train. The train leaves from Estació de França, Passeig de Gràcia and Sants stations. There is also a bus to Sitges that leaves from Gran Via de les Corts Catalanes, by Plaça de la Universitat. A taxi to Sitges costs about €90 and takes roughly 45 minutes.

What Costa is Sitges on?

Sitges is on the Costa Garraf, which is between Barcelona and the Costa Dorado.

On which day are Sitges museums free?

How to get to the airport from Sitges?

Taxis are available in front of the train station. It costs about €65-75 to get from Sitges to El Prat airport by cab. Getting to the airport by bus is easy, with buses normally leaving Sitges every half hour or so from the Parc Can Robert stop. The price of the bus to the airport is €8. It takes about half an hour and stops at Terminal 1 only. To get to Terminal 2 you will need to take a shuttle bus. You could also take the train from Sitges to Sants station and then to El Prat airport, but that would take longer than the bus.

Which are some good cafes with wifi for remote working in Sitges?

Montroig Cafe and Federal Cafe Sitges are both good for taking your laptop for an hour or two to work or study.

Is Uber available in Sitges?

Not currently, but it is usually easy to find a cab by the train station.

Travel Resources from our partners:

• SafetyWing Travel Insurance Travel medical insurance. Covers people from all over the world, while outside their home country.

• Top Picks for Hotels in Sitges Get the best deals on hotels from Booking.com.