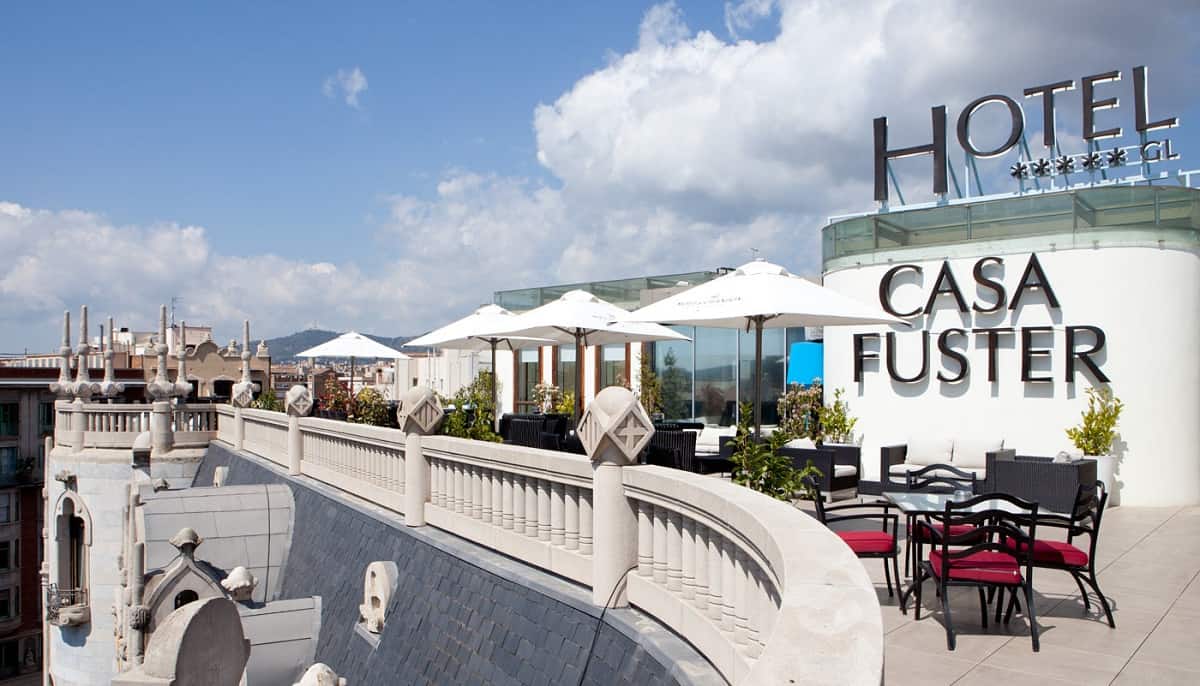 Barcelona’s most luxurious hotels are housed in everything from historic heritage buildings to the ultra modern. Pictured above: the roof terrace at Hotel Casa Fuster, an emblematic modernist building, once a private home, reflecting the grandeur of the early 20th century. Book securely with our partner Booking.com, who offer a best price guarantee.

The striking neoclassical building occupied by the 5-star Grand Hotel Central was constructed in 1926 by the renowned architect Adolf Florensa, who drew inspiration from Chicago architecture of the period. Veteran hotelier Pau Guardans, creator of other luxury urban hotels including Hotel Único (Madrid) and the Hotel Miró (Bilbao) transformed the former office building to recreate the elegance of 1920’s Barcelona in a hotel. Book Online

The historic five star Casa Fuster hotel in the Gràcia neighborhood was originally built in 1908 by Spanish Catalan modernist architect Lluís Domènech i Montaner. The ‘casa’ was originally a gift from Mariano Fuster i Fuster, a high standing member of Mallorcan society, to his wife, Consuelo Fabra i Puig.The Hoteles Center chain acquired the building in 2000 for renovation and the hotel opened it’s doors in 2004. Book Online

Famous for both it’s hotel and restaurant, the exclusive ABaC Barcelona is set on Avinguda Tibidabo in the affluent Sant Gervasi neighborhood. The smallest on our list of Barcelona luxury hotels, ABaC offers 15 modern luxury rooms along with its 2-star Michelin restaurant, run by renowned chef Jordi Cruz. Above: ABaC Lounge, photo by Marco Pastori. Book Online

The massive and luxurious Hotel Arts Barcelona offers a total of 483 rooms including apartments and executive suites, making it a touch larger than the shiny beachfront W Hotel Barcelona with its 473 rooms. Hotel Arts Barcelona, completed in 1994, was designed by Skidmore, Owings and Merrill, led by Colombian architect Bruce Graham. Blue glass and exposed steel characterize the 44-floor hotel building, which has become a model of high-tech architecture. The hotel underwent a complete renovation in 2006 to modernize rooms and bathrooms to the highest standards of luxury. Book Online

The iconic 5 star W Barcelona, also known as Hotel Vela (sail), was designed by the Barcelona-born Spanish architect Ricardo Bofill. Opened in 2009, the hotel offers 473 rooms, 67 suites and is staffed by 400 employees. Located in the Barceloneta district of Barcelona the building stands on 7 hectares of land reclaimed from the sea in the construction of the new entrance to the harbour. Hotel Vela offers abundant natural light and spectacular views over the Mediterranean Sea and city of Barcelona. Book Online

The Cotton House Hotel in Eixample recalls the wealth and grandeur generated by the Barcelona’s textile industry in the late 19th century. Elements such as a regal marble staircase and ceiling frescoes have been carefully conserved in what was originally a privately owned mansion and later turned into headquarters of the Catalan Association of Cotton Manufacturers. Book Online

Ohla Hotel is located on the site of the former palace of the first Count of Barcelona. The 74-room boutique hotel features a terrace with a glazed swimming pool overlooking some of the most emblematic architecture of the city. Chef Xavier Franco reinterprets traditional Catalan cuisine at the Michelin-starred Saüc restaurant, named after the elderberry plant for it’s healing properties. Book Online

Hotel Neri is housed in a 12th century medieval palace in the heart of Barcelona’s Gothic quarter. The boutique hotel offers 22 exclusive rooms and a gastronomic restaurant, looking out onto the historic Plaça Sant Felip Neri. Book Online

The 5-star G.L. Hotel Miramar resides in a carefully restored palace on the slope of Montjuïc hill. The 75 room hotel evokes the splendor of the 1920’s along with its modern design and amenities. The original façade of the palace built in 1929, when Barcelona was celebrating its second Universal Exhibition, has been preserved. Breathtaking views over the city and the Mediterranean are available both from balconies of rooms and the hotel terrace. Book Online