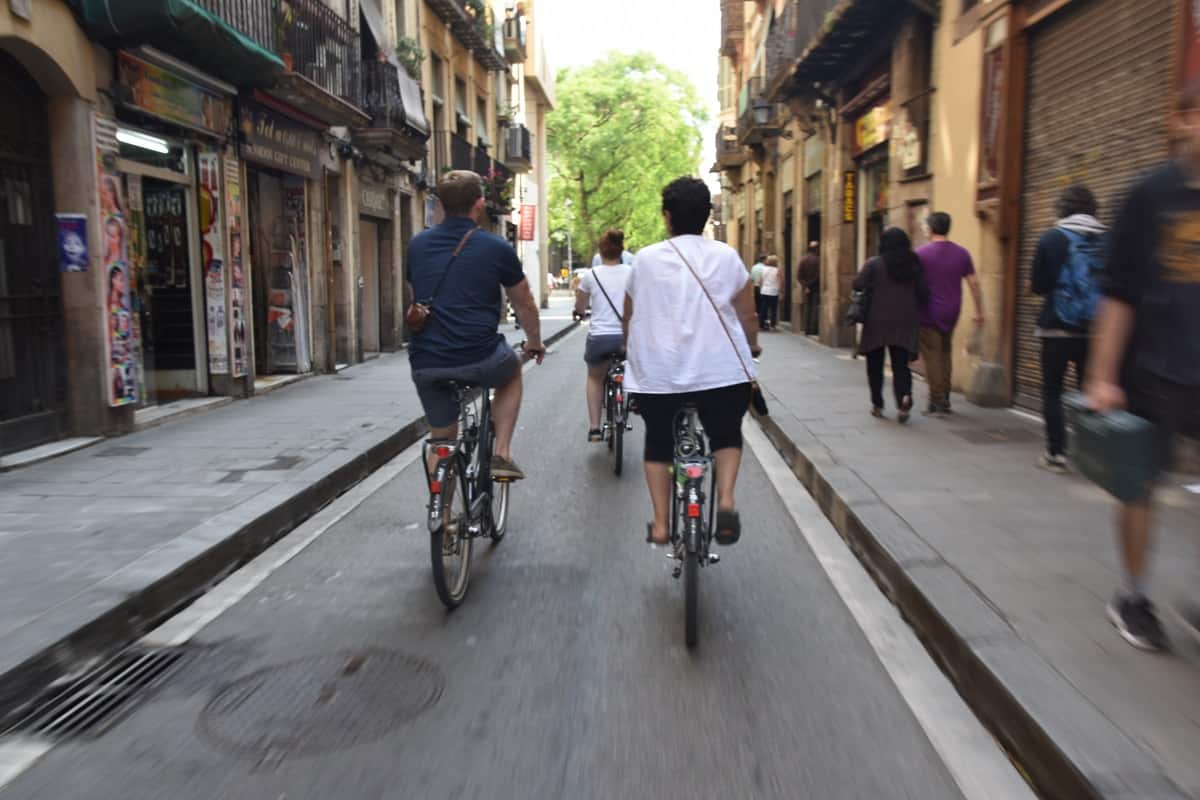 Q: How can you see the major sights of the old town of Barcelona, 4 historic neighbourhoods, the heights of Montjuïc, beautiful parks and glorious beachfront – all in just 4 hours?

Friday 10AM on a hazy June morning. It was time to mount up at Donkey HQ on Carrer de Cervantes in the beating heart of the Gothic Quarter.

Our guide Nadim (originally from Lebanon) warmly greeted us and set us up with our trusty steeds. I was pleasantly surprised by the comfort of the ‘sit up and beg’ style bikes, with wide saddles, fat tyres, automatic gear shifts and a bell to help clear your path. Sturdy as a donkey, which also happens to be a symbol of Catalonia.

Having a chuckle in Plaça Sant Jaume

Our first stop was the nearby Plaça Sant Jaume, the political center of Barcelona. Nadim showed us City Hall and the Palau de la Generalitat, pointing out the various different flags. Inevitably we got into an interesting conversation about the Catalan independence movement. Fascinating to know that we were also standing in the former center of the Roman city of Barcino. Veni. Vidi. Amavi.

We then made our way down to Port Vell where we learned about the Columbus Monument, built in 1888 for the Exposición Universal de Barcelona. Nadim explained that much of the interesting architecture of the city is tied to the Universal Exposition of 1888, the International Exposition of 1929 and of course the 1992 Summer Olympics. From the port we made our way through the Gothic Quarter to the towering hill of Montjuïc.

Montjuïc stands 185 meters high. Antoni Gaudí limited the height of La Sagrada Família to 172.5 metres because he did not want a work of man to exceed a work created by God…

It was here we got a little exercise, winding up the mostly gentle slopes of the “Jewish Mountain”. Along the way we passed through the Jardins de Mossèn Costa i Llobera, a colorful garden of cactus and succulent plants with wonderful views out to the Mediterranean Sea.

We stopped to take in the lofty views by the restaurant Martínez. From here Nadim pointed out interesting buildings that stand out along the coast looking north, such as Torre de les Aigües and Torre Mapfre.

Just around the corner we were treated to sweeping views over the city that allowed Nadim to identify landmarks such as La Sagrada Família, Santa Maria del Mar and Torre de Collserola.

It was time to head down the hill to our next destination, El Raval. The name originates from the arabic ‘A-Rabal’ meaning ‘on the margin’, as it was once situated outside the city’s walls. We stopped in the Rambla del Raval by Fernando Botero’s sculpture of a chubby cat. Here Nadim gave us the inside scoop on the multi-ethnic and bohemian neighborhood.

We then glided up to the MACBA (Barcelona Museum of Contemporary Art) on Plaça dels Àngels. This is a very trendy spot where ‘all the young dudes’ (remember that song?) love to hang out and perform daring feats on skateboards. We got our street art fix satisfied by the classic Keith Haring mural adorning one of the nearby walls.

From there we made our way back towards the Gothic Quarter, winding through the seductive labyrinth sitting on over 2,000 years of history.

The Cathedral by the Sea

Crossing Via Laietana we arrived in El Born and made our way to the magnificent 14th century church, Santa Maria del Mar.

The Catalan Gothic church was built at the the apex of the kingdom of Aragon’s maritime and mercantile power. We had time to go in and take a look around the interior, which has the widest spaced columns of any Gothic church in Europe.

We took a pause on Passeig de Lluís Companys, named after the President of Catalonia during the Spanish Civil War. The Arc de Triomf at the top was built by architect Josep Vilaseca i Casanovas as the main access gate for the 1888 Barcelona World Fair.

Nadim explained that the Mudéjar style was used. Characterized by the use of glazed red brickwork, the style was developed by the Moors in the 12th century and it can also seen in Casa Vicens.

From there it was a short ride into Parc de la Ciutadella. It was here that Philip V built the citadel of Barcelona during the War of the Spanish Succession.

Once inside we made our way to the Cascada (fountain), the most emblematic monument of the park. It was built between 1875 and 1888 by Josep Fontserè with help from a young Antoni Gaudí.

The morning haze had burned off by the time we made it to the beach at Port Olímpic and it was a glorious Barcelona spring afternoon. Nadim told us stories behind the history of the seafront and how much it has changed since the time before the Olympics. He also gave us some pro tips on the best local beaches to enjoy.

Our last stop was in Barceloneta, overlooking the Playa de San Sebastián and Ricardo Bofill’s landmark W Hotel. The tour was a fantastic way to take in the city’s sights, peppered with captivating stories and anecdotes by our inspired guide Nadim. Highly recommended, a tour not to be missed!