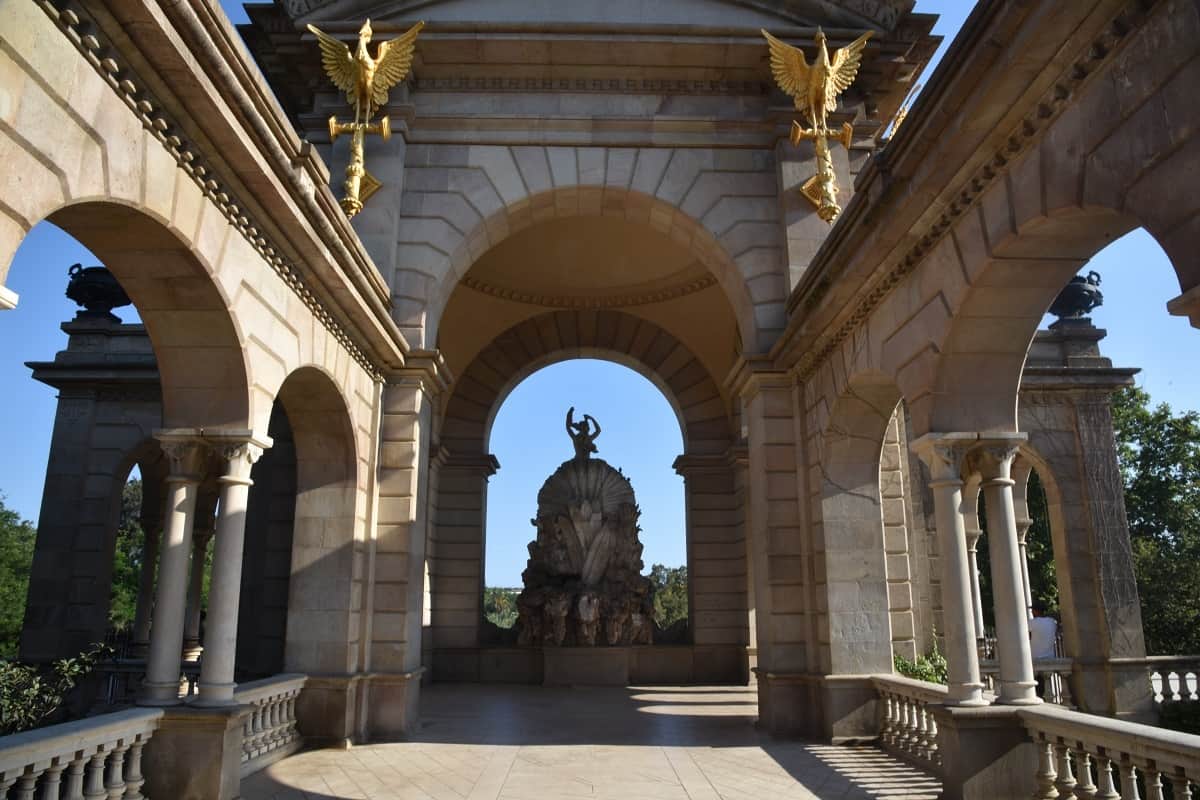 During the War of the Spanish Succession (1701–1714), Barcelona under seige for 13 months by the army of Philip V of Spain. In 1715, King Philip V ordered the construction of a large military citadel to control Barcelona after its surrender on September 11th 1714. At the time it was the largest fortress in Europe. It included enough buildings to house 8,000 people. The north west city walls and over 1,200 houses in La Ribera neighborhood were destroyed to allow for it to be built.

The citadel was hated by the citizens of Barcelona. In 1869, General Juan Prim gave the citadel to the city of Barcelona to be used as a park as a gesture to gain support from the industrial bourgeoisie. The demolition of the citadel made way for the creation of Parc de la Ciutadella in 1872. General Prim is memorialized in a statue in the park near the entrance.

Barcelona zoo, the Palau del Parlament de Catalunya and an iconic fountain designed by Josep Fontserè are among the best known features of the 70-acre park.

The park contains over 100 species of plants and a number of trees of over 100 years of age.

The Castell dels Tres Dragons, by Domènech i Montaner was originally designed for the 1888 Barcelona Universal Exposition.  It is named the ‘Castle of the Three Dragons’ after a work by the 19th century playwright and poet, Serafí Pitarra (Frederic Soler). The towers and battlements are reminiscent of the Moorish style and large blue and white shields decorated with stylized motifs crown the building. It was originally designed as the World’s Fair café and restaurant but was not completed in time. It later housed the Geology Museum and the Zoological Museum (1920 to 2010).

The hivernacle is a winter garden made of cast iron and glass, situated next to Castell dels Tres Dragons. It was originally designed by Josep Fontserè but ultimately built by Josep Amargós between 1883 and 1887. Decorative elements include Hellenistic cast iron palmettes, lobed forms and crowns.

The umbracle stands next to the hivernacle. Also built by Josep Amargós between 1883 and 1887. The wooden roof is designed to let a limited amount of light in, to mimick the conditions in a rain forest. Large tropical plants live inside, originating from 20 different countries. Common varieties such as hydrangeas, kentia palms, gardenias and small ficus trees are housed in the Umbracle along with more exotic plants such as alocasias and chasmanthes or ‘Adam’s rib’ plants, Indian banyans, arecaceae, wax palms and winter jasmine. During the 1888 Exposition it was used as a hall for conferences and parties.

The tragic murder of transsexual Sonia Rescalvo Zafra took place at the bandstand (Glorieta de la Transsexual Sònia) in 1991, by right-wing extremist youths. Sonia fled her family in the city of Cuenca at the age of 16 and had performed at the Arnau theater, off Avinguda del Paral·lel. 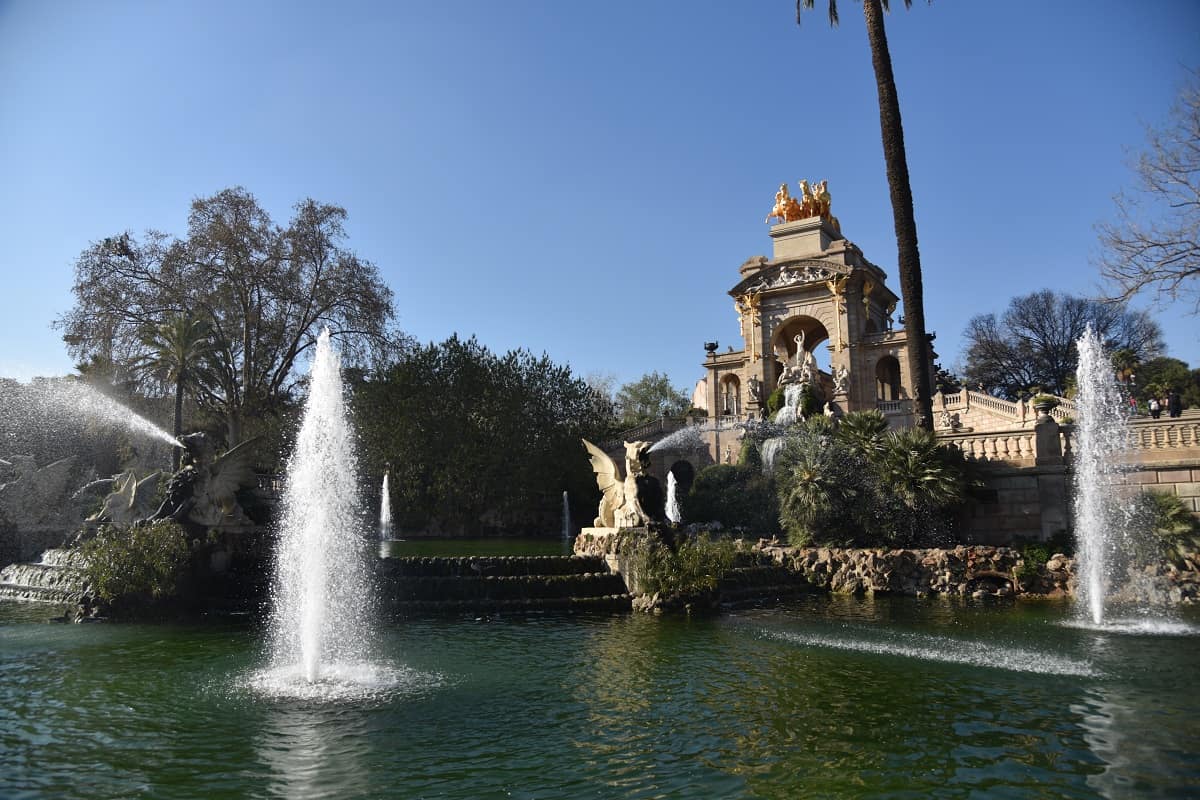 The waterfall was first inaugurated in 1881, without any sculptures or elaborate decorations. Further construction including the fountains took place between 1882 and 1888. The fountain was designed by Josep Fontsére with minor contributions from a young Antoni Gaudí, who was a student of architecture at the time. Gaudí has been attributed with the rocky decoration of the waterfall and some of the decorative motifs. Venanci Vallmitjana’s Naixement de Venus (Birth of Venus) stands at the center. Venus is the Roman godess of love, sex, beauty, and fertility. Four griffins at the bottom, sculpted by Rafael Atché, guard the fountain. Crowning the fountain is the La Quadriga de l’Aurora (Aurora’s Chariot) sculpture by Rossend Nobas. Aurora is the Roman goddess of dawn. Nobas also sculpted four groups of djinns, two fauns and the figure of Eros. The steps allow visitors sweeping views of the park, especially beautiful at dawn and dusk. Fontsére was inspired in part by the Trevi Fountain in Rome. From a distance, the waterfall resembles a giant crab, with the staircases forming the claws.

The Catalan Parliament occupies the building that was formerly the military arsenal of the citadel.  The parliament building looks very similar to the way it did when it was completed in 1748, by the architect and military engineer Próspero de Verboom. In front of the parliament is Josep Llimona’s sculpture El Desconsol.

The Parlament de Catalunya can be vistited on the first Friday of the month with a guided tour in Catalan.

Two other buildings from the old military citadel built in 1715 remain, standing across from the Palau del Parlament de Catalunya: The chapel (now the Military Parish Church of Barcelona) designed by Pròsper Verboom in 1728 and the Governor’s palace (now Verdaguer Secondary School). 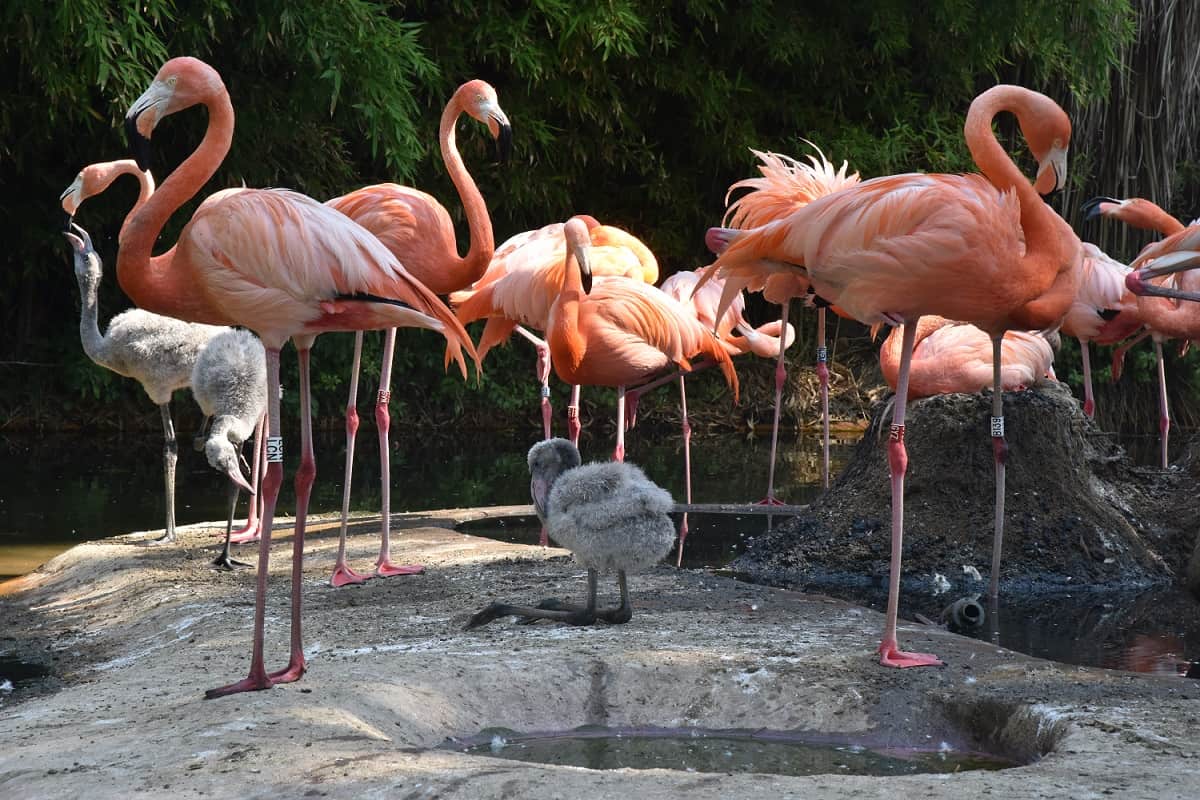 The Barcelona zoo is located in the park thanks to a few buildings left empty after the Universal Exposition of 1888. It was inaugurated in 1892 don the day of La Mercè, the patron saint of Barcelona. From 1966 to 2003 the zoo was home to the famous albino gorilla Snowflake, originally from Equatorial Guinea. The fountain crowned by Joan Roig i Solé’s famous sculpture, La Dama del Paraigües (The Lady with the Umbrella -1885) stands near the entrance of the zoo.

The bronze sculpture Als Voluntaris Catalans (to the Catalan Volunteers) was designed by Josep Clarà. It was inaugurated on July 14th 1936, on Bastille Day (the national day of France). It depicts a young man with arms raised, and serves as a memorial to the 14,000 Catalans who fought alongside the French during World War I. The monument had been completed in 1923, but the rise to power of the dictator Primo de Rivera stalled the project due to the supression of any public act of Catalan self-determination.

Other sculptures include the statue of General Prim on horseback by Frederic Marès. (See also: Museu Frederic Marès). The park has a number of marble busts including Eusebi Arnau’s bust of Marià Aguiló, Pau Gargallo‘s bust of Lleó Fontoba,  and Manuel Fuxà’s busts of Milà i Fontanals, Víctor Balaguer and Joaquim Vayreda. Near the entrance of the zoo, Joan Roig Soler’s La dama del paraigua (woman with umbrella) crowns the ornamental fountain designed by Josep Fontserè.

The stone mammoth adjacent to the waterfall is a life-sized reproduction of the extinct animal added to the park in 1907.