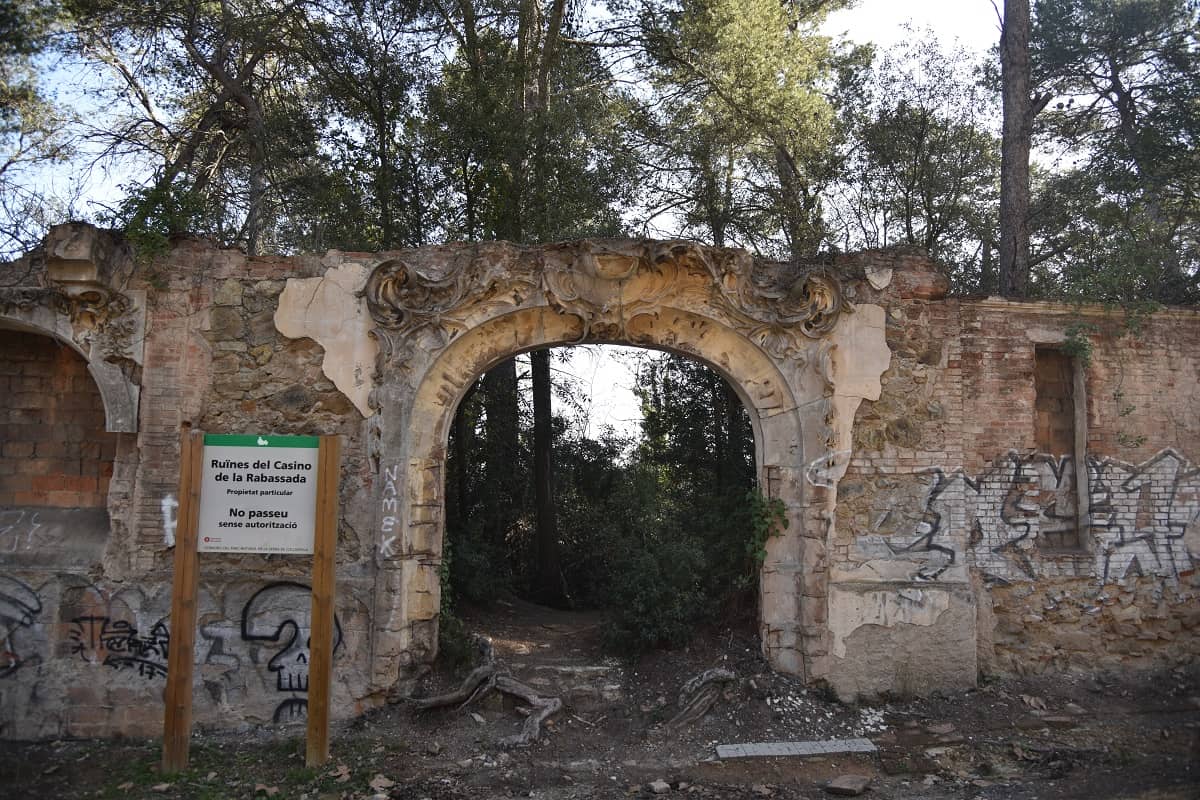 With more than 2,000 years of history, Barcelona has its fair share of ghosts and mystery. Explore the dark legends of the Catalan capital, if you dare…

Torre Salvana is an abandoned castle dating from the 10th century. Situated just outside Colònia Güell, it is famous for paranormal activity and is recognised as one of the most haunted places in Catalonia, earning the nickname Castillo del Infierno (Castle of Hell).

Carrer d’Estruc is a mysterious alleyway, located just a couple of mintues walk from Plaça de Catalunya. Its history dates back to medieval Barcelona when it was situated outside the city walls. It was here that an astrologer and sorcerer called Astruc Sacanera lived during the 15th century. He was famous for using a black stone called “Pedra Escurçonera” and a powder for the purpose of healing rabies or bites. Arcane plaques mounted on the walls commemorate the mystical history of the street.

Enriqueta Martí was an alleged serial killer living in Barcelona at the beginning of the 20th century. She reportedly abducted poor children from the street and used them for prostitution. She also allegedly murdered them and used their blood to make tonics to treat tuberculosis, which is how she earned the nickname of Vampire of Barcelona. She was finally caught after kidnapping a girl called Teresita, who was recognized though a window. Enriqueta Martí lived at Calle Poniente (now called Joaquín Costa) in the Raval neighborhood, close to Casa Almirall.

The great Catalan poet and writer Jacint Verdaguer had also been ordained as a priest in Vic at the age of 25. When he was 41 he experienced a personal crisis, feeling himself to be selfish and vain even after making a pilgrimage to the Holy Land. At number 7 of Carrer dels Mirallers in the El Born neighborhood he is said to have performed numerous exorcisms along with his friend Father Joaquim Piñol.

The Mercat de Santa Caterina dates back to 1845 and was renovated in 2005. The market stands on the site of the Convent of Santa Caterina, founded in 1243. The convent was demolished a year after the Spanish government confiscated the church property in 1836. Legend says that the devil once appeared before numerous witnesses, invoked by witches performing black masses.

Rocafort (L1) is a metro station where TMB workers dread to be assigned at night. After multiple suicides (including four within the space of one month), it became known as the cursed station. Ghosts are said to have been seen walking on the platform and along the tracks. The paranormal activity has even reportedly been picked up by the surveilance cameras at the station. Years before being part of the subway network, the space had served as a refuge during the Civil War.

Situated just behind the Mercat de Santa Caterina lies a small innocent looking street. In the the 1950’s, houses on Carrer de la Flor del Lliri were used as inns for travelers. During this period, many guests were reported to have disappeared in mysterious circumstances, never to be seen again.

Agustín Atzerias was an industrialist who in 1892 was facing serious financial problems. Nevertheless, he wanted to finish building a fine house for himself in Gràcia. He decided to make a deal with the devil, selling his soul in exchange for a fortune. He ended up winning the lottery and consequently decorated the facade of the house with demon heads, which remain to this day.

This street in La Ribera was home to the most famous school of witchcraft in Barcelona. The school was run by a famous disciple of the devil called “Seca”. It is rumored that the school produced professionals of witchcraft who would buy the bones of people that had been condemned to the gallows. Several of the schools students were ultimately captured and burned at the stake.

In 1935, the building at Carrer Francisco Giner, 43 in Gràcia was the setting of extreme paranormal events. Many of the people living there experienced poltergeist phenomena, such as loud banging noises on the wall and furniture flying in the air. The residents fled the building and the paranormal events continued for a week. There were multiple witnesses, including the police and the press.

The legend states that during the Middle Ages the site on which the Gran Teatre was built had been used for executions and was cursed. It has certainly had a long series of bad luck since then. After being completed in 1847, it was severely damaged by fire in 1861. In 1893, 20 people were killed when an anarchist called Santiago Salvador threw two Orsini bombs into the stalls. Just over 100 years later, in 1994, the building was completely destroyed by a fire.

The world famous market on La Rambla called La Boqueria was also built over the ruins of a convent, in this case the Convent of Sant Josep, founded by the Carmelites Descalços in 1586. The myth tells us that a group of dead friars once appeared to the brothers of the convent, singing to them. Ten days later the convent was attacked, set ablaze and the Carmelites were killed. It is said that you can hear singing in the market every year on July 25th.

In 1899 the Grand Hotel de la Rabassada was built and it was extended in 1911 with the construction of a casino designed by the architect Andreu Audet i Puig. The glamorous casino was built during a period of economic expansion and prosperity in Barcelona. It featured an amusement park with a roller coaster, an elaborate restaurant with chefs from Paris and an orchestra. The gardens were adorned with exotic plants from across the globe. The casino was famous for roulette and as a place where great riches were quickly made and lost. The sinister legend surrounding the hotel is that there was a specific room that was used for suicides after people had lost their fortunes at the roulette table. The abandoned overgrown ruins of the hotel still stand in Collserola Park. See also: Abandoned Places In and Around Barcelona.

Plaça del Comerç in the heart of the Sant Andreu neighborhood is said to be haunted, with numerous paranormal sightings each year. The most common report is that between 9pm and midnight a ghost is seen crossing the square, revealed by the light of the street lamp which stands in the middle.

Known as ‘The Alchemist’s House’, this building is situated in the heart of El Call (the Jewish Quarter) with the aptly named Satan’s Coffee Corner at the end of the street. In the 14th century a famous Jewish alchemist lived there. He had a beautiful daughter who was in love with a Christian. She pleaded with the young man to ask her fathers permission for them to marry, but he declined, knowing that the father would never agree. This lead the daughter to end the relationship. Enraged by the rejection, the spurned lover decided to poison his former sweetheart. He visited the alchemist father and acquired a poisoned rose that could kill with a single sniff. At night, he called up to the daughters window, begging forgiveness and offering the deadly rose. The daughter accepted and was felled after taking in the lethal scent. When the alchemist returned and found his daughter dead from the rose that he himself had poisoned, he fled the house forever and put a curse on it.

In the town of Cardona in Barcelona province there is a spectacular Parador hotel situated in a medieval castle. The management of the hotel decided to close room 712 to the public, except by express request, due to a variety of reported paranormal phenomena. Even the cleaning staff of the Parador only dare to enter 712 in pairs amid unexplained events such as finding all the furniture together in the center of the room and hearing voices inside when the room is empty. The legend has it that the origin of these paranormal events can be traced back the 11th century, when a young Christian woman called Adalés fell in love with a Muslim. She was condemned by her disapproving father to live locked in the Minyona Tower, where she ultimately died of a broken heart.

The enchanted wood of Òrrius in Barcelona province is full of mysteries and legend. Among these are curious figures carved in rock, such as the Moai pictured above, reminiscent of the giant heads on Easter Island.

Deep in the Garraf Natural Park, lies an abandoned town called Jafra. The legend tells of a weathly Austrian family who moved to the hamlet about 100 years ago. The children had a skin disease and the father had an elaborate garden made for them to play in. The family did not allow the children to leave or for other people to enter. A fourth child named Melinda was born in the farmhouse and the mother died that night. The other children died one by one and the father became very distressed. The gardeners and household workers left because the father began to behave strangely, sometimes like a maniac. One night in October, six-year-old Melinda fled to the garden, pursued by her father. Legend has it that she fell into the well in the garden and that she and her father were never seen again. The ghost of Melinda is said to appear in the forests, to help lost visitors. Others say that Melinda can occasionally be seen on the curves of the winding pathways of the Garraf Natural Park, which is why she is sometimes called the girl on the curve.

The ‘devil’s bridge’ crosses the Llobregat river between Martorell and Castellbisbal. The legend describes a young woman who had to cross the river repeatedly to fill her jug. The woman could no longer cross the river as she grew old and the devil appeared one day to propose a deal, offering to build a bridge in exchange for the first soul who crossed it. She accepted and the next day the bridge was already built. Remembering her deal with the devil, the woman then sent a black cat to run across the bridge. The origins of the bridge can be traced back the year 10 BC when it was used by the Romans and was part of the Via Augusta. It was remade it 1283 in the Gothic style, but was destoyed during the Civil War by retreating Republican troops. It was then rebuilt in 1963, staying faithful to the Gothic style. Remains of the original Roman triumphal arch still stand on the eastern side of the bridge.

Barcelona is home to five abandoned Metro stations: Banco Station (L4), Gaudí Station (L5), Correos Station (L4), Ferran Station (L3) and Travessera Station (L3). Perhaps the most interesting is Correos, which is situated between the Jaume and Barceloneta stops – it still has billboards from the distant past on the walls.

👻 Do you know any other haunted places in Barcelona? Let us know in the comments!