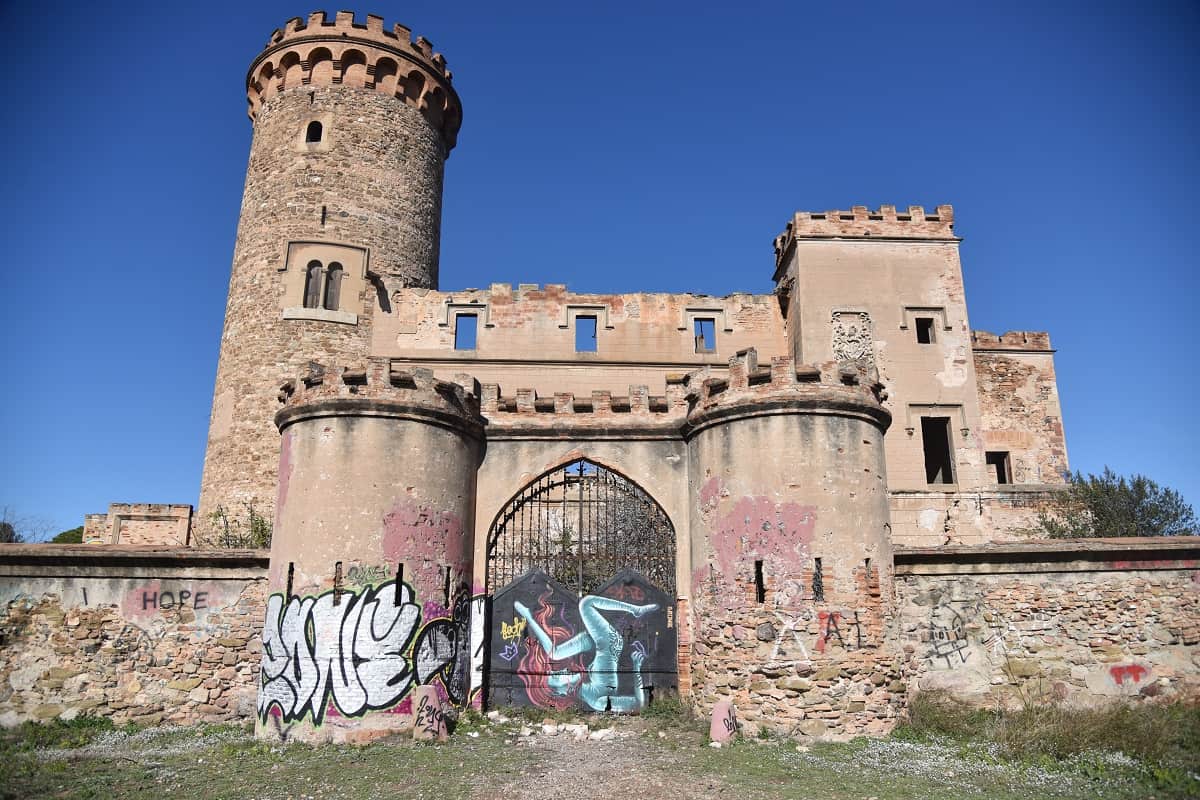 From castles to casinos, hospitals to hotels, in this post we unravel the mysteries of the forgotten buildings of Barcelona and Catalonia.

Torre Salvana (above) is an abandoned castle dating back to the 10th century, located near the entrance to Colònia Güell, about 23km south-west of Barcelona. Architecturally, it is Romanesque with Gothic modifications. It was named a Cultural Heritage Site in 1988. Torre Salvana is famous for paranormal activity and is recognised as one of the most haunted places in Catalonia, earning the nickname Castillo del Infierno (Castle of Hell).

In 1899 the Grand Hotel de la Rabassada was built and it was extended in 1911 with the construction of a casino designed by the architect Andreu Audet i Puig. The glamorous casino was built during a period of economic expansion and prosperity in Barcelona. It featured an amusement park with a roller coaster, an elaborate restaurant with chefs from Paris and an orchestra. The gardens were planted with exotic plants from across the globe. The casino was famous for roulette and as a place where great fortunes were quickly made and lost. During the dictatorship of Primo de Rivera, the game was forbidden and the casino fell into disuse.

The ruins of an orphanage inspired by Father Flanagan remain along the path of Sant Medir in Collserola. The orphanage was built in 1951 on the grounds of a farmhouse called Casa Puig. Testimonials from some former residents of the ‘city of boys’ describe severe conditions.

The Mirador del Semàfor in El Prat de Llobregat was built in 1887 to regulate coastal shipping traffic. The building was designed to communicate with the castle of Montjuïc through the use of flags to warn of possible incidents or shipwrecks.

La Mussara, near Tarragona is a town dating back to the 12th century that has been abandoned since 1959. Among the various ruined buildings, the church of San Salvador with a bell tower from 1859 stands out.

The Hospital del Tórax is a former hospital located in the north of the city of Terrassa, north of Barcelona. It housed patients with respiratory diseases from 1952 to 1997. The building has been partially reformed and is now used by the Audiovisual Park of Catalonia.

La Torre del Governador is situated in the town of Alella to the north of Barcelona. It was owned by Enric de Cardona and Erill, governor general of Catalonia towards the end of the 16th century and then belonged to the counts of Santa Coloma (18th and 19th centuries). In 1890 it was acquired by Antoni Borrell Folch, a politician and financier. Borrell commissioned modernist architect General Guitart and Lostaló to build the most emblematic elements of the building. Borrell stated in his will that he wanted the property to be used for education. Torre del Governador was used as a school until 2001, when it was sold.

La Puda de Montserrat is a former spa of located on the left bank of the Llobregat river near Montserrat. An earthquake reportedly caused sulphurous waters to emerge there since the eighteenth century. The spa was built in 1870 and during the nineteenth and twentieth centuries it was visited by the bourgeoisie of Barcelona. It was closed in 1958, destroyed by the river flooding and is currently in ruins.

Hotel Colonia Puig dates back to the beginning of the 20th century, when it was a luxurious hotel for visitors of Montserrat. It is situated close to the Sant Benet de Montserrat monastery. In 1936 it was acquired by the government and used as a hospital for wounded Republican soldiers during the Civil War.

The Preventorio Marítimo de La Sabinosa was built in 1929. It is located on a small peninsula between the beaches of la Rabassada and la Sabinosa in Tarragona. It was originally built to house patients suffering from tuberculosis and during the Civil War it was used to care for wounded Republicans who had participated in the Battle of the Ebro (the largest battle of the war). It was later used to house children who were left orphaned by the conflict. The complex of buildings has been abandoned since 1976.

This modernist building in Les Planes was designed by the architect Joan Rubió i Bellver. It is the only remaining building of a sanatorium built in 1905. At the end of the 19th century, the lack of hygiene standards and poor living conditions led to the rise of diseases such as typhus and tuberculosis. Many sanitoriums were built around Tibidabo and Vallvidrera for the sick to recover in secluded surroudings with fresh air. Joan Rubió i Bellver was a disciple of Antoni Gaudí and collaborated with him on many works, including La Sagrada Familia and Casa Batlló.

Deep in the Garraf Natural Park lies an abandoned town called Jafra, uninhabited since the 1960’s. The site has been documented since 1139, but the ruins of buildings that remain date back to the 18th and 19th centuries. The church of Santa Maria de Jafre and its rectory were established in 1305. The hamlet has its own dark legend, about a girl called Melinda said to haunt the area.

A ruin should always be protected but never repaired – thus may we witness full the lingering legacies of the past.