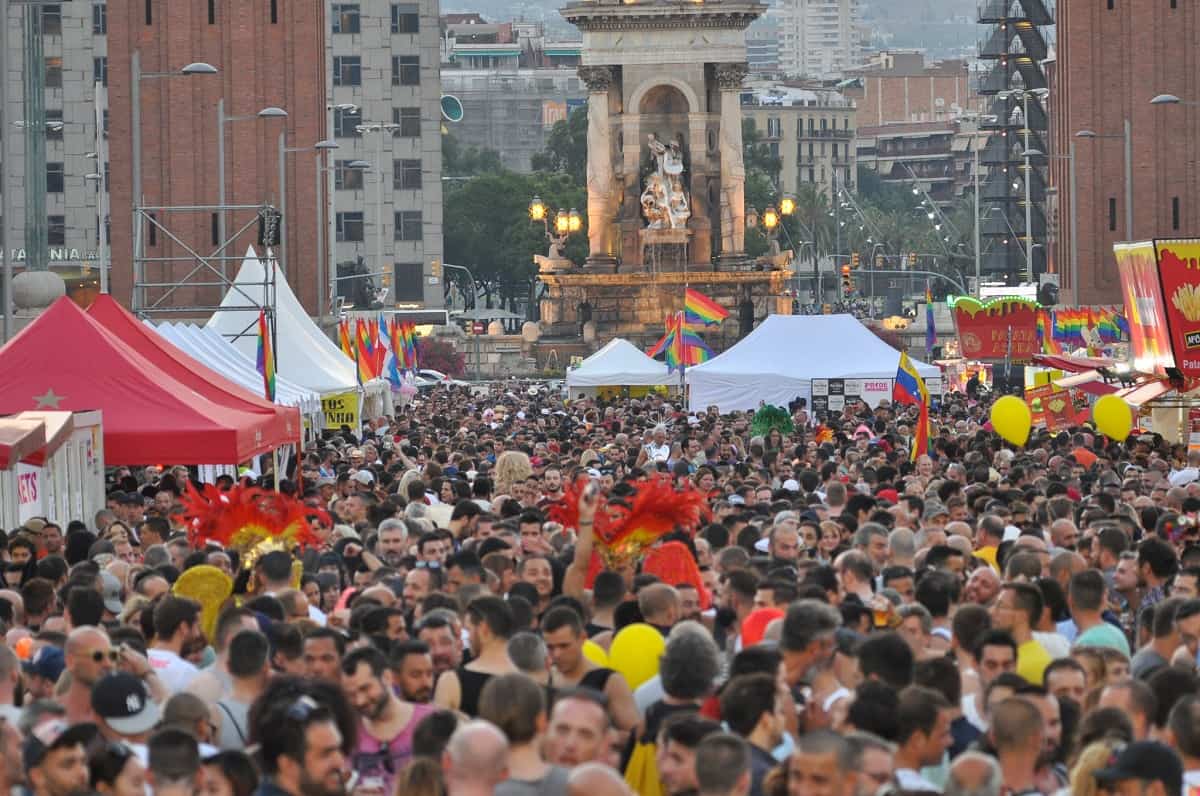 Barcelona is famous for having a vibrant gay scene and a culture favoring freedom and diversity. The city has been a pioneer in fighting for the rights of the LGTBI community since the 1970’s. Same-sex marriages have been held in Barcelona since 2005.

The most famous gay neighborhood is called ‘Gaixample’. The rectangular area bordered by Carrer Balmes, Gran Via, Carrer Urgell and Carrer Aragó is within the Eixample district. Many popular gay bars, nightclubs, hotels, shops and restaurants are situated in Gaixample.

Boys Bar BCN In the heart of Gaixample, BoysBar BCN has a welcoming and friendly atmosphere.

Moeem Barcelona Lively bar in Eixample, open daily and has a terrace.

El Cangrejo Situated in a gritty part of Raval, El Cangrejo (the crab) is famous for its for ’80s nights and drag shows.

La Chapelle Decorated with religious artifacts, the bar is small and welcoming.

Versailles A place to see and be seen. Famous for its opulent decor.

Zelig Raval based Zelig hosts a mixed crowd and offers music, food, cocktails and a terrace in the summer.

Aire Chicas From Grupo Arena, Aire is an emblematic name for lesbian nights in Barcelona.

La Rosa Situated outside the city center, in the Sarrià-Sant Gervasi neighborhood, La Rosa is a favorite among Lesbian bars.

Les9fonts A center of therapies and natural products.

63  Bis Fashion shop with 9 years of history in Gaixample.

Fundació Setba Setba Foundation works with culture as a vehicle for integration, devising and coordinating artistic projects that enhance and raise awareness about the social value of culture. The foundation is situated in a flat where the artist and LGBTQ + Spanish activist José Pérez Ocaña (1947 – 1983) once lived.

Arena Classic A very central, cozy place, with the most entertaining music and crowd.

Metro-Disco Gay disco only for nocturnal men. The gay album of Barcelona.

The Black Room Since 2011, the Black Room has been a top gay party in Barcelona. Every Sunday at City Hall Club.

Librería Cómplices CÓMPLICES is a historic LGTBQI library in the Gothic Quarter, fighting for the LGBTQ culture for 22 years.

Revista Shangai Leaders in information, leisure, fashion and lifestyle for the Gay and Lesbian collective.

Gut Restaurant Gut was launched in 2010 by a group of friends who wanted to create something together.

Condal Distributed across three floors with a varied clientele.

Galilea Urban gay sauna in the center of Barcelona. Four floors where you can have fun and relax.

Only is Love An innovative concept that unites fashion with eroticism.

Sant Sebastià One of Barcelona’s oldest and most traditional beaches, situated in Barceloneta.

Mar Bella This beach has an area for naturists and attracts a diverse crowd.

BCN Checkpoint A community based center for the detection of HIV and other STI’s, which caters to gay men, bisexuals and transgender women.

Gais Positius An association of gay and bisexual men with HIV who work to respond to HIV and AIDS since 1994 for the LGBT community with a rights-based approach.

Stop Sida Stop Sida promotes sexual rights and empowerment in the care of sexual health and HIV prevention from and for the LGBT + community.

ACATHI ACATHI is an association established for persons of different origins, migrants and refugees from the LGBT community. They represent a diverse collection of identities that are the essence of a project that aims to influence and raise awareness of the reality of LGBT asylum seekers, with focuses on justice and human rights.

ACEGAL The Catalan Association of Companies for Gays and Lesbians, organizer of PRIDE Barcelona and promoter of the commercial axis of the Gaixample.

Casal Lambda Casal Lambda is a non-profit organization that works for the recognition of the rights and freedoms of the LGBT community.

Generem Association composed of Barcelona residents who are in different stages of gender transition. Generem aims to publicize the realities of different gender identities and expressions.

Panteres Grogues  Panteras Grogues Sports Club is a non-profit association offering a space where gays, lesbians, bisexuals and transsexuals can enjoy sporting activity in a free and relaxed way.

Snow Gay Weekend Snowgay Weekend is the only winter gay festival in Spain.