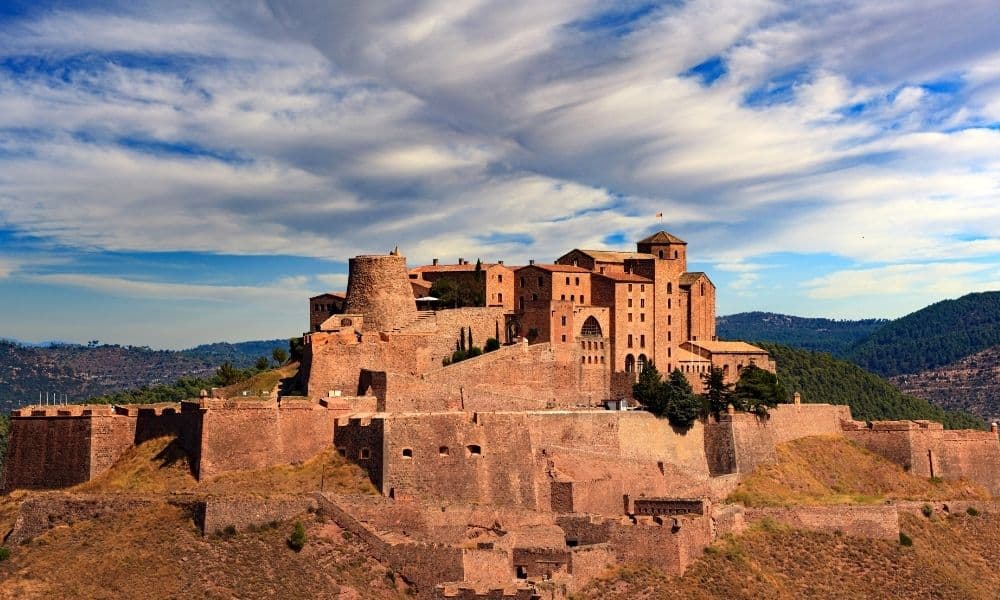 If you’d like a weekend that is a little different and not your typical seaside trip, consider a visit to nearby Cardona. Situated about 90km northwest of Barcelona, the historic town sits beside the river Cardener, a branch of the Llobregat.

There are two major attractions in Cardona; the striking medieval castle and the nearby salt mountain.

The Castle of Cardona

The Castle of Cardona stands on a hill overlooking the Cardener river and the town of Cardona. The fortress was initially constructed in 886 by the Catalan Count of Barcelona, Wilfred the Hairy. The castle is built in both Romanesque and Gothic styles. Romanesque style is characterized by semi-circular arches and the Gothic Style which evolved from it is defined by the pointed or ogival arch.

In 1714, at the end of the War of the Spanish Succession, the garrison at the castle was one of the last to surrender to the Bourbon troops loyal to King Philip V. The castle is in remarkably good condition considering its age of over 1,000 years. Its preservation has been helped by a centuries old decree demanding that citizens of Cardona take one day each year to work on its maintenance.

The most famous part of the castle is the 11th century Torre de la Minyona. The tower reaches 24 meters high and has a base of more than 10 meters in diameter. Originally it was almost twenty meters high, making it an important surveilance point.

Torre de la Minyona translates to ‘tower of the maiden’. There is an important legend surrounding it, reminiscent of Romeo and Juliet. The story goes that Adelaida, the daughter of a the Lord of Cardona, fell in love with an Arab prince from a neighboring town called Abdullah. They began to meet in secret and over time took greater risks. One day Adelaida’s father found out and he immediately declared war on the Arabs and expelled the Muslims residing in the village. Adelaida was locked up in the tower, where she was attended only by a mute maid. The young man built a cross using stones from the river to show his plans to convert to Christianity, but he was still shunned by the maiden’s family. In the end, Adelaida died of a broken heart while in captivity.

The Church of Sant Vicenç of Cardona is a Lombard Romanesque church in Cardona, Catalonia, Spain. It was built between the years 1019 and 1040, and is located in the center of the castle.

Built in the 11th century and rebuilt in the 14th century in Gothic style. It houses a precious polyptych by Pere Vall, depicting St. Anne, the Virgin and St. Amador and a 15th-century baptismal font.

It is possible to sleep overnight at the castle, at the Parador of Cardona. The interior features vaulted ceilings and courtyards, while bedrooms have canopy beds.

How to get from Barcelona to Cardona

Alsa bus has a service from Barcelona to Cardona, you can view details here: www.alsa.es/destinos-rutas