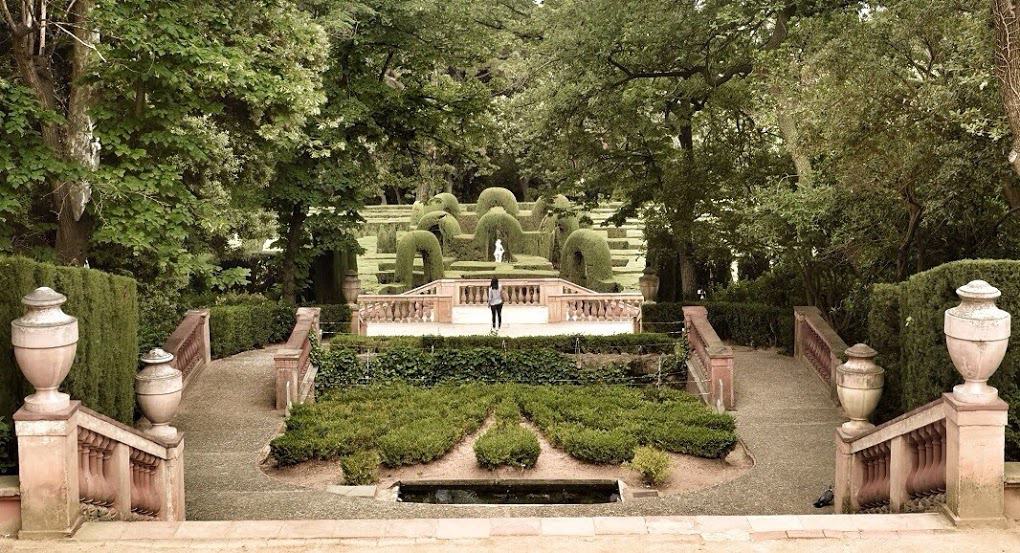 The Parc del Laberint d’Horta (Labyrinth Park of Horta) is the oldest park in Barcelona. Located on the former estate of the Desvalls family, it dates back to 1791 when marquis Joan Antoni Desvalls i d’Ardena collabated with Italian architect Domenico Bagutti to create the neoclassical garden.

The Desvalls Palace, a building with neoarabic and neogothic elements stands at the entrance of the park. It is currently used as an institute of gardening education and library.

The neoclassical garden is made up of multiple terraces. The labyrinth occupies the lower terrace, made up of  two-metre-high  of cypress hedges. At the entrance there is a classical frieze depicting Minos welcoming Theseus’s arrival in Crete and in the centre there is a statue of Eros, the Greek god of love.

On the next level, there are two Italian-style pavilions with tuscan columns and statues of Danae and Ariadne. Next to the staircase that leads upwards there is a bust of Dyonysus.

At the top there is a pavilion dedicated to the nine muses, Calliope, Clio, Euterpe, Erato, Melpomene, Polyhymnia, Terpsichore, Thalia and Urania. Behind the pavilion there is a large pond that serves to irrigate the gardens. The pavilion served as the focal point for social events, which included open-air theatre performances.

The park currently covers over 9 hectares. The 18th-century neoclassical garden was expanded by the descendants of the marquis to include a 19th-century romantic garden designed by architect Elies Rogent.

In 1967 the Desvalls family gave the park to the city of Barcelona, who opened it to the public in 1971. Substantial restoration works were completed in 1994 with financial support from the European Union.

The park was used in a scene of the film Perfume: The Story of a Murderer by German director Tom Tykwer.