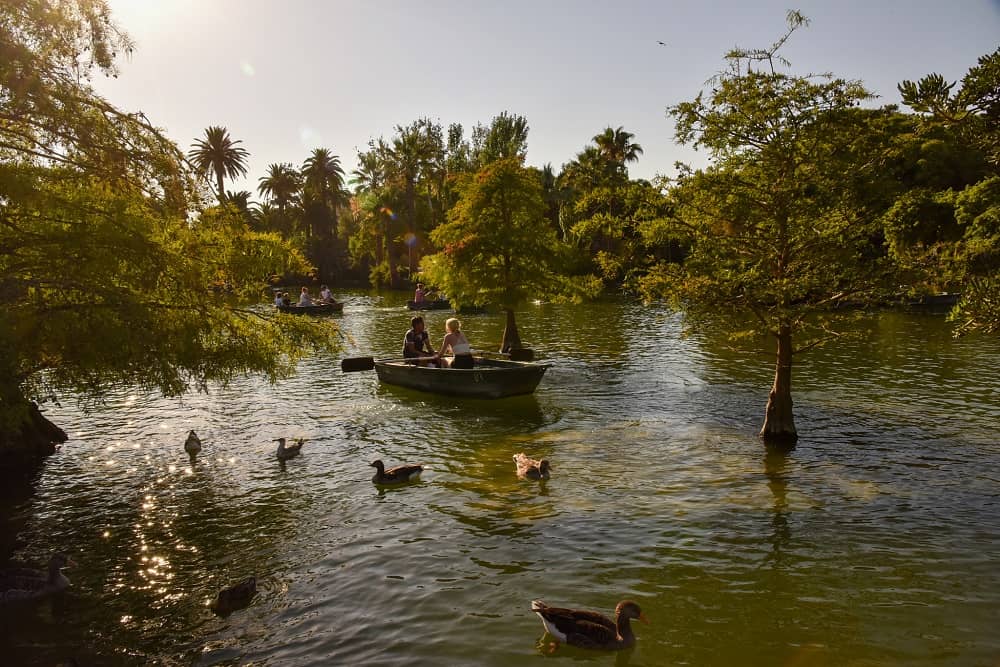 You have met a special someone and you need some inspiration for a perfect day or evening together. Let’s dive in and take a tour through some of the most romantic places and things to do in Barcelona.

In the heart of Barcelona’s most iconic park there is a pond with paddle boats. Rowing around face to face in your private vessel guarantees a few laughs and an intimate memory. Boats can be rented for a half hour at a time.

When thinking of Barcelona venues with a ‘wow’ factor, El Nacional comes quickly to mind. The building was once a 19th century textile factory but has been transformed by designer Lázaro Rosa Violán into a glamorous hall featuring multiple restaurants.

I posted a question on Reddit asking for the best ideas for a first date in Barcelona. Someone said ‘anywhere on Calle Enrique Granados’. I thought to myself, yes, I could not have put it better. This street is so beautiful you can’t lose, especially in warmer weather when the terraces are all open and there is magic the air.

It used to be a secret. Not anymore, but you can’t beat the views over the city. Bunkers del Carmel is where anti-aircraft batteries were placed during the Spanish Civil War and the level surfaces and gun turrets remain. Bring a blanket and a picnic and watch twilight fall over Barcelona.

The Parc del Laberint d’Horta is the oldest park in Barcelona. It dates back to 1791 when marquis Joan Antoni Desvalls i d’Ardena collabated with Italian architect Domenico Bagutti to create the neoclassical garden.

El Molino is a theatre and concert hall on Parallel Avenue in Poble Sec, a neighborhood historically known for the performing arts. It opened in 1898 under the name of Aviary Catalana. It is famous for its music, theater, flamenco, burlesque and cabaret.

Despite its imposing stature, Torre de Collserola is one of the least known attractions of Barcelona. It was designed by the British architect Sir Norman Foster and by the Spanish civil engineers Julio Martínez Calzón and Manuel Julià Vilardell. The tower was built in 1991 for the 1992 Summer Olympics and is situated near Tibidabo. Take the glass elevator up to the highest viewpoint in Barcelona and enjoy the 360 degree views.

Woody Allen could not resist the vintage amusment park of Tibidabo to include in his 2008 movie Vicky Cristina Barcelona. Take a ride together in the brightly coloured big wheel called Giradabo.

With its kitsch charm, El Bosc de Les Fades has become a Barcelona institution. Situated in a small alley off Las Ramblas, you can share a drink or something to eat in a world of forest and fairies.

💕 Do you have any suggestions for romantic things to do in Barcelona? Let us know in the comments!